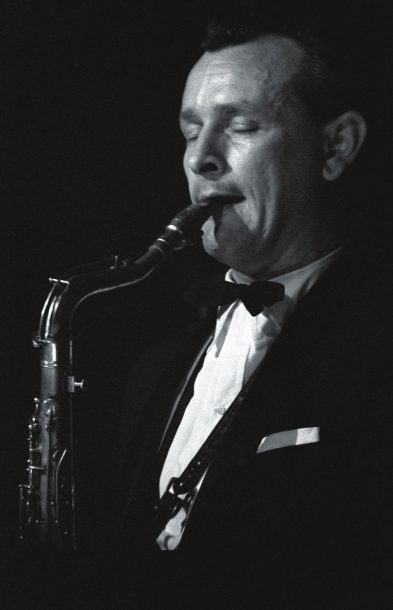 It was probably 1956 when I first met Jimmy Giuffre at a jam session in one of the clubs on Hollywood Boulevard. I had been a fan of Jimmy’s, and having been a composition major in school I was intrigued by his writing for Woody Herman’s band. Everybody was talking about the “Four Brothers” arrangement. Anyway, I saw him outside this club, introduced myself, told him what a big fan I was, and how it was such a pleasure to meet him. And with that Texas accent that I can still hear in my mind today, he said, “Same to ya!”

I’ve said many times that listening is the key. I may not have realized it back then, but that’s what I learned from working with Jimmy. He listened so carefully, and his observations changed my playing. He would notice if I was hitting the guitar pick too many times in a phrase that he had written. He’d say, “Try to make that sound more like a wind instrument and leave out some of the articulation.” That changed my way of listening to the guitar, opened my ears in a different way.

Some old liner notes said we started rehearsing in the fall of 1956 in Harry Jones’ studio in Hollywood, and that may be so, but my memories are of the rehearsals in the garage. First in Ralph Pena’s garage, and later in the garage at the house where Jimmy and his first wife lived with their pet cheetah. That cat scared the pants off Ralph one day, and I remember one time Jimmy showed up for work and he was limping ’cause he had been playing catch with the tennis ball with the cheetah. The cheetah was running toward him and Jimmy tried to get out of the way, but the cheetah was so quick it went the same way and knocked him down.

We played in a lot of wonderful places. We traveled throughout the country and overseas, and played great festivals-like Newport in 1958-but one of the most unusual gigs was at Dick Bock’s house. Dick owned Pacific Jazz Records and was having a party for Ravi Shankar, the sitar player from India. Those summers at the Music Inn in Lenox were amazing, too-listening to Jimmy jam with Ornette Coleman was unforgettable. Playing with Jimmy and Bob Brookmeyer at Café Bohemia, opposite Miles Davis with Cannonball Adderley, John Coltrane, Paul Chambers, Philly Joe Jones and Bill Evans, was another ear-opening experience. Jimmy was eclectic long before that word was hip, always searching, growing, exploring new paths, from country music to the avant-garde. He listened to everything and was open to influences that allowed him to push the envelope in every direction.

It was through working with Jimmy, when he was being managed by Norman Granz, that I got hooked up with Ella Fitzgerald and Yves Montand. Granz was their manager, too, and soon I was on tour with Ella and later with Yves. That was a real showbiz thing, but it was fun.

The last time Jimmy and I played together was at a concert in Italy. He had a trio there, with Steve Swallow and Paul Bley, and his wife, Juanita, asked if I wouldn’t mind playing a couple tunes with them. He was really pretty shaky, and I didn’t know until Steve told me that he had Parkinson’s. But once he put that horn in his mouth, you’d never know it: He played great.

My last conversation with Jimmy was funny in a way, but very poignant. The last years of my contact with Jimmy were by telephone, and toward the end, he was so weak that Juanita would hold the phone for him and I would just talk to him. But occasionally he would be able to answer some. I remember telling him how important he was to me, and how much I had learned from him and by his example, and he said, “Same to ya!”