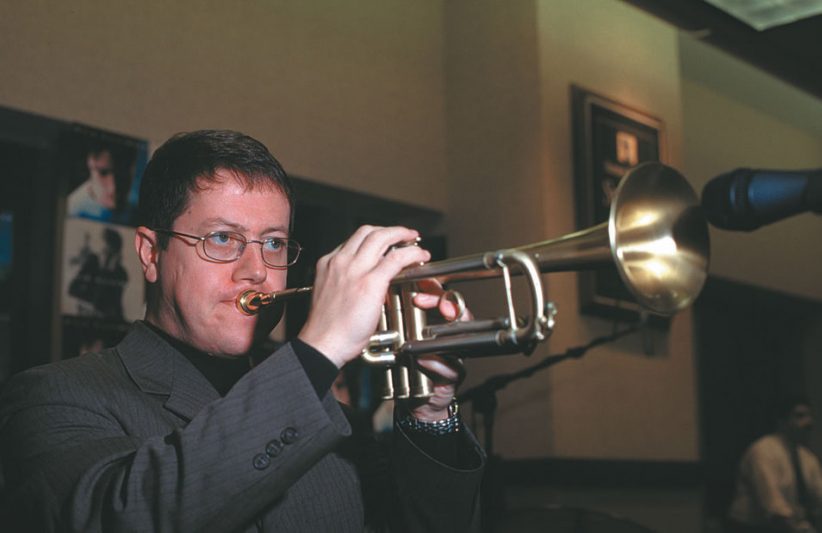 Straightahead trumpeter/flugelhornist Jim Rotondi sleeps, brushes his teeth and swats flies in Manhattan Plaza, a federally funded housing tenement for musicians, actors and, oddly, elderly folk that housed Charles Mingus, Dexter Gordon and Walter Bishop in the 1970s. The rent is based on income, which is good because Rotondi, 38, has so far escaped widespread recognition. He’s been persistent: recording with One for All (his cooperative with Eric Alexander, Steve Davis, David Hazeltine and Joe Farnsworth), Ray Appleton and Dena DeRose; playing with the Carnegie Hall Jazz Band and Toshiko Akiyoshi; teaching at SUNY Purchase. He’s also cut three records as a leader for Criss Cross, but the press hasn’t dropped much ink. Entering his name into Google yields little more than reviews of albums he’s played on as a sideman. It keeps the rent cheap.

The hopefully titled Destination Up, Rotondi’s first for Sharp Nine as leader (One for All cut Optimism for the label in 1998), may be his big chance to grab ears and capture hearts. The company he keeps, pianist Mulgrew Miller, vibist Joe Locke, bassist Peter Washington, drummer Joe Farnsworth and featured trombonist Steve Davis, places Rotondi in a unique situation. “With the exception of the two tracks Steve plays on, there is no other wind instrument,” Rotondi explains. “It’s the first time I’ve attempted anything like that. It is a less aggressive approach.”

The new group may be less aggressive, but Rotondi maintains that less aggressive doesn’t mean dated. “I feel that with One for All and my earlier leader efforts I’ve sort of gone after the straight hard bop, ’60s Blue Note influence, but I’m trying to update the sound a little bit; playing with Locke and Mulgrew made me do that. It pushed me in a different direction.” That direction is a laid-back, open sound, realized well with a version of Herbie Hancock’s “Yams,” Destination Up’s closing track, that sports a stretched-out tempo and sparse accompaniment. An up-to-date sound is nice, but most of all, Rotondi hopes the direction he’s moving in is, well, up. Of course, more attention might raise that low, income-based rent.