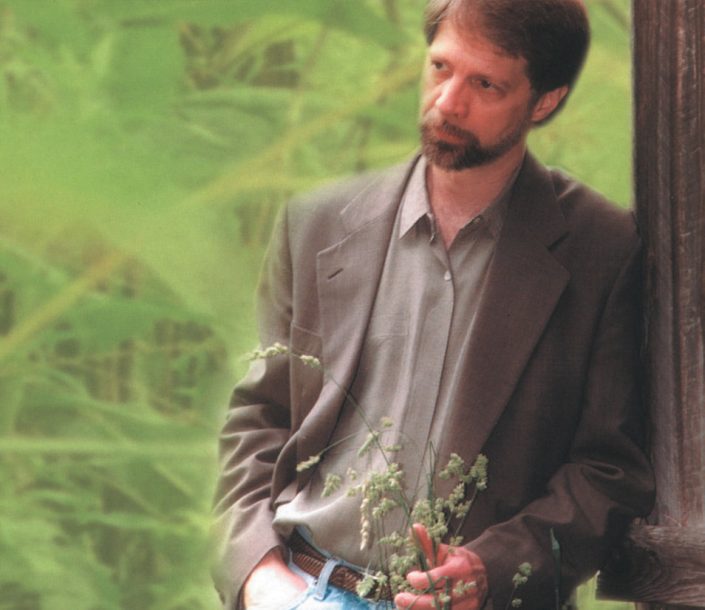 Shortly after the release of Jim Ferguson’s solo CD debut, Not Just Another Pretty Bass, the singer-bassist received a mysterious e-mail from a Boston neurosurgeon inquiring whether there were any left-handed persons in his family. Ferguson replied that his father, a drummer and music educator, was a lefty. “I knew it,” the doctor responded, delighted by confirmation of his long-held theory that lefthanders are gifted with a predisposition to do two things at once.

What’s remarkable about Ferguson isn’t that he simultaneously sings and plays bass, but that he does both so well. He’s not jazz’s first singing bassist. Slam Stewart and Major Holley hummed along with their plucked and bowed improvisations; Bob Flanigan and Ken Albers of the Four Freshmen accompanied the group’s vocal harmonies; and the late Red Mitchell and, currently, Jay Leonhart use their idiosyncratic voices as vehicles to present their own wry, often philosophical compositions. But Ferguson is equally accomplished as a straightahead jazz bassist and a smooth, supple tenor with a style reminiscent of, but far more expressive than, Chet Baker’s youthful cool-school vocalizing.

At age 4, Ferguson began singing in a South Carolina church choir and listening to recordings by Frank Sinatra and Peggy Lee on radio. While in high school, he studied classical vocal technique but, he admits, “Although I loved bel canto, I never felt comfortable with the foreign language thing, never thought that was really me.” In his senior year, he bought a bass to perform in church folk services, and, as a college freshman, was introduced to jazz by a college band director who played him an Oscar Peterson record featuring Ray Brown.

For the next decade, Ferguson, now 50, alternated between academic studies at the University of South Carolina and gigging as a professional musician. In the early ’70s, he spent a half-year stint singing and playing bass with the pop-folk group, The New Christy Minstrels, but quickly tired of life on the road. “I had some lovely experiences along the way,” he recalls. “In Los Angeles, I got to hear Bill Evans at Diamante’s and attended a Supersax Plays Bird recording session.” Several years later, pianist-songwriter Loonis McGlohon chose him as bassist for the NPR series American Popular Singers, hosted by Eileen Farrell and featuring such guests as Joe Williams, David Allyn and Jackie and Roy.

In 1979, Ferguson spent six months in New York, studying with bassists Michael Moore and Chuck Israels. Red Mitchell had returned to the U.S. from Sweden, and became an important influence and mentor. But Ferguson’s engagement to violinist Toni Fominaya drew him back to South Carolina, where he completed undergrad and graduate music degrees. In 1981, the Fergusons moved to Nashville, where they currently reside with their 8-year-old daughter, Lily. “It’s a town where, if you can play, you can work,” Ferguson explains. “There’s no closed-door policy.” As a back-up singer, he performed on country music awards shows and with the Statler Brothers, Dinah Shore and Tennessee Ernie Ford, while keeping up his instrumental chops by jamming in clubs and playing in rehearsal bands with jazz musicians emigrating from New York. For the last decade, he has toured as bassist and back-up vocalist with country singer Crystal Gayle’s band.

Five years ago, Ferguson formed his own jazz group to showcase both of his talents and, after two years, he decided that it was time to record as a leader. “At 45, I felt that I was finally ready,” he says. “I knew which players I wanted to use, had made some emotional connection with the music, and was really starting to enjoy it. I didn’t want to find myself at 65 wondering ‘What if?'”

On Not Just Another Pretty Bass, and his current release, Deep Summer Music (both for A-Records) Ferguson performs some of the classic standards that he heard as a child. He’s also begun writing his own material. The new CD contains three original compositions, as well as a lyric set to Red Mitchell’s bass solo on “You’d Be So Nice to Come Home To.”

The most affecting contemporary jazz-oriented male vocalist, Ferguson can’t quite explain how or why he is able to invest so much vulnerability in his music. “Sometimes I think that I must have a lot of psychological baggage that needs therapy. For some reason, I find at this point in my life that I can be an actor, even express things that don’t necessarily come from my own experience. I feel that I now have some legitimacy as singer of these kinds of songs.”