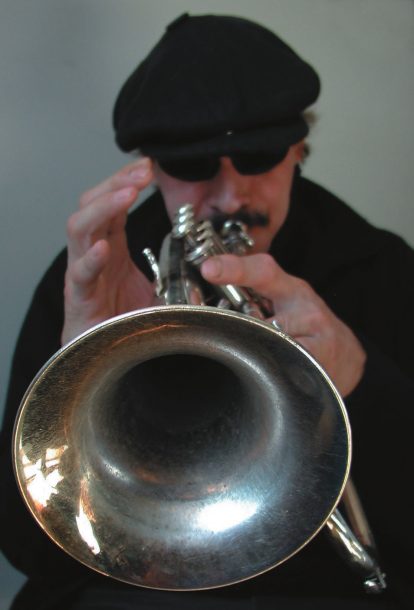 Trumpeter and conguero Jerry González has finally found a place where he can relax and concentrate on his music. The 55-year-old New Yorker went to Madrid in 2002 with Spanish film director Fernando Trueba to promote the Latin-jazz-performance film Calle 54. He says he and the Spaniards hit it off “from jump street. When we got here I took a walk down the street and I was stopped by 40 people for autographs!” he says by phone from Barcelona. “It was blowing my mind!”

The film had a limited art-house distribution in the U.S., but in Spain it was an underground hit. The film featured some of the biggest names in Latin jazz (Tito Puente, Paquito D’Rivera, Gato Barbieri and Chico O’Farrill, among others) in live performance in the Sony film studios on New York’s 54th Street. Jerry González and the Fort Apache Band close the film with their Afro-Cuban-based explorations of bebop. Although Fort Apache had never played in Spain before, González became so popular through his appearance in the film that he was invited to prolong his visit. Record producer Javier Limon wanted to introduce González to some of the Spanish musicians mixing jazz and flamenco. “I told them, ‘I’ll stay for a week’,” González says. “I stayed for seven months! I only went back to New York to do a week at [Manhattan jazz club] Sweet Basil’s, and then I was back on a plane the day after that gig was over. I’ve been here ever since.”

There is no secret as to why he stays.

“In New York I’d be sitting around waiting for the phone to ring,” González says. “In my first six months here I played on five or six albums: with [Spanish jazz vocalist] Martiro, Bebo Valdes’ and [flamenco vocalist] Dieguito El Cigala’s CD [Lagrimas Negras (Bluebird)] and I even did a track on the latest CD from Paco de Lucía [Cositas Buenas (Blue Thumb)]. I did a bunch of club work, concerts and stuff. It’s kept me much more active than I would have been in New York. Here they pay me well, and I don’t have to hustle gigs.”

González took Limon up on his offer to meet some Roma (Gypsy) musicians who had been mixing flamenco and jazz. Limon arranged for the meeting to take place in a recording studio. “I thought we were just jamming for our own pleasure,” González says. “We didn’t rehearse; we made it up on the spot. We had some fun, played some great music and moved on.”

Limon mixed the jams, sent a copy to Trueba, who by then had set up his own record label (Lola). They were both so impressed by the new ground covered by the informal musical exchange that they decided to release the CD. Jerry González y los Piratas del Flamenco was released to great acclaim in Spain in 2003, and it came out on Sunnyside in the U.S. this past June.

The CD is a combination of cutting-edge flamenco mixed with González’s command of bebop, with a dash of Afro-Cuban thrown in. Flamenco guitarist Nino Josele and percussionist Israel “Pirana” Suarez are González’s principal accompanists. El Cigala sits in on two cuts, lending his dark, rough-edged flamenco-singing style to the mix. But the album’s crowning achievement is the flamenco take on Charlie Parker’s “Donna Lee” (spelled phonetically in Spanish on the CD as “Donnali”). As he does on most of the CD, González is doubling on conga while he works Bird’s bebop tongue-twister on trumpet. Guitarist Juan Jose Suarez “Paquete” shadows him note for note but with a decidedly Roma accent.

González seems to have found a place for himself within the small circle of adventurous Spanish musicians, and the club dates, sessions and a set of quartet recordings are taking their toll on the veteran musician-for the better.

“I’m playing better because I’m playing almost every day here,” he says. “I’m also more relaxed out here. This place has a 24-hour vibe. They take their siestas late in the afternoon, which means I start at 1 a.m. and play until 6 a.m.!”

But the detour from his work with Fort Apache and his occasional contributions to genre-busting dance band Manny Oquendo’s Libre back in New York doesn’t mean a fundamental change in direction for González. “If I went to China to play with Chinese musicians, I’d still be standing on my own music—who I am as a musician,” he says. “Playing with these flamenco cats is just an expansion of who I am.”