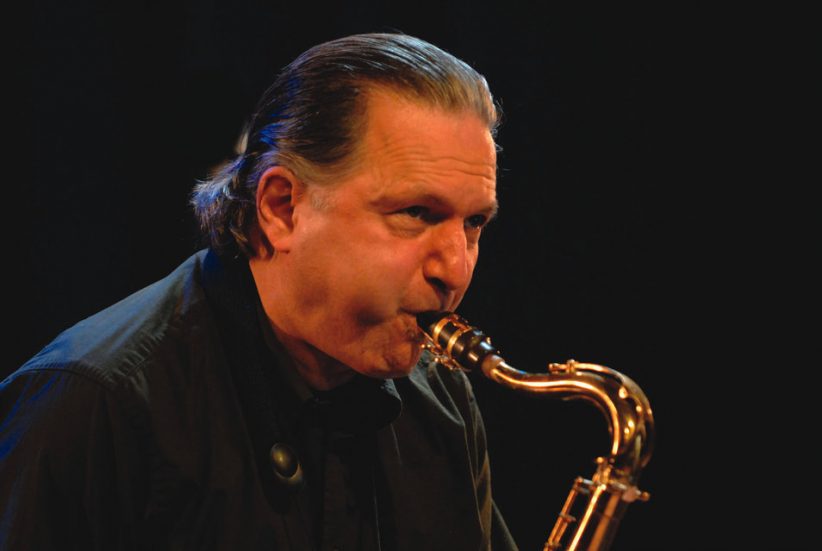 I’m still here, and I’m not a miserable S.O.B.!” says 58-year-old Jerry Bergonzi with a laugh when asked what he considers his greatest accomplishment. Certainly, the Boston-born-and-bred tenor saxophonist has reason to be content. Not only has he earned a reputation as one the finest tenor saxophonists of his generation, he’s also a renowned jazz educator. He’s taught at the New England Conservatory since the mid 1990s, and authored an influential series of books on improvisation. He performs at the most prestigious clubs and festivals, and teaches master classes to aspiring jazz musicians all over the world. Life is good for “The Gonz.”

Bergonzi’s quintessentially modern tenor sax style melds the linear, chromatic approach of such greats as Joe Henderson and Wayne Shorter with the horizontal, chordal techniques of John Coltrane. His tone is full-bodied with an occasional hard edge, enhanced by a savvy use of dynamics and creatively varied articulation. He’s an expressive and versatile player, as comfortable playing the hoariest of jazz standards as he is playing an Ornette-ish free tune. Above all, his manner of playing is utterly spontaneous and distinctive. With such contemporaries as Joe Lovano, Michael Brecker, George Garzone, and Dave Liebman, Bergonzi has helped define the modern approach to his instrument.

Bergonzi started on clarinet at age 8. He remembers hearing jazz when he was very young, thanks to a very hip uncle, a guitarist, bassist and trombonist who lived upstairs from the Bergonzi family. “I listened to Basie, Lester, Ellington,” says Bergonzi in a friendly, unassuming voice that’s as much New York as Boston. His uncle took an active role in his early jazz education. “He wrote out jazz solos for me to play. The first was on ‘When the Saints Go Marching In.’ I worked on that for three months!” he remembers.

Bergonzi got his first saxophone-“an old Conn alto”-around the age of 11. By 14 he’d switched to tenor full-time. He played in a youth band led by the jazz educator and saxophonist John LaPorta. LaPorta had played alto and clarinet with Mingus; apparently, the irascible bassist’s demanding leadership style had rubbed off. “LaPorta would stop the band and tell you why you sucked, in front of everybody,” Bergonzi, laughing, “but it was so great. He was such a great inspiration and leader.”

Before long, Bergonzi was also studying with another Boston musical legend, saxophone teacher Joe Viola. “Joe and John were the best. I’d go to a lesson with Joe and we’d play these sax duets. Joe would sight-read the tenor parts on alto, transposing as he played, and never make a mistake.” Along the way, Bergonzi also developed some electric bass chops, which would come in handy when it came time to support himself as a musician.

After high school, Bergonzi attended the University of Massachusetts at Lowell. It was an unsatisfying experience, to say the least. “It was just terrible, just pathetic,” says Bergonzi. “A bunch of stuffed shirts-music school with no music. Other than that it was great.” He managed to escape Lowell’s clutches and attend Berklee for a year, but financial difficulties forced his return.

After graduating in 1971, Bergonzi gigged around Boston, mostly playing bass, backing singers, strippers and comics. By 1972 he’d saved enough money to move to New York. Initially he roomed with a friend, the bassist Harvie Swartz. Bassists are always in demand, so living with one was a boon. “Harvie referred me for gigs, took me around. He’d get a call to play a session, and he’d say, ‘Hey, my roommate is a tenor player, do you mind if I bring him along?'” Bergonzi landed a regular weekend gig at Mercer Arts Center in Manhattan. “It was great,” says Bergonzi, “until the roof caved in, and that was the end of that.”

The six-plus years Bergonzi lived in New York were critical to his development. His third-floor loft became the scene of many a jam session, featuring the cream of New York’s young jazz crop: Joe Lovano, Steve Slagle, Dave Liebman, Michael Brecker, Bob Berg, John Scofield, Tom Harrell and Pat LaBarbera were among those who came to play. It was in the aftermath of one of those sessions that Bergonzi almost got to play with the musician he considers his greatest influence, Elvin Jones.

“Elvin’s my all-time hero. Anything he’s on, I’d buy. Everything about him-the rhythm, the intensity,” says Bergonzi. “After one of those sessions, Dave Liebman says he’s going to go hear Elvin’s band, and would I like to come along? So we go to the place, and Dave, he used to play in Elvin’s band, so he sits in. Then [pianist] Richie Beirach goes up and sits in. I’m just getting my courage to go up, and one of the guys says, ‘Elvin doesn’t want anyone else sitting in,’ so I missed out.”

Another jazz legend gave Bergonzi his biggest break. In 1973, Dave Brubeck hired Bergonzi to play with Two Generations of Brubeck, a band that included the pianist’s sons, Chris, Darius and Danny. It was a turning point. “For the first time, I was able to live the life of a musician. Playing jazz paid the rent,” he days. With Brubeck from 1973-75 (and later, from 1979-81), Bergonzi performed at the biggest festivals and the most prestigious venues.

By the early 1980s, Bergonzi was back in Boston, working on the city’s then-fertile jazz club scene. Around that time he also became involved in jazz education, teaching improvisation privately, developing a system he later spelled out in a series of books titled Inside Improvisation. Bergonzi found teaching liberating. “It was pure. I was able to make a living doing jazz all the time,” he says.

As the 1980s and ’90s progressed, work in Boston became scarce. “When they raised the legal drinking age from 18 to 21, work in the clubs dried up,” he says. Fortunately, he was afforded more and more opportunities to work outside the U.S. His recording career also took off. In 1989, he realized every jazz musician’s dream by recording for Blue Note (Standard Gonz). He also recorded several albums for Italy’s Red Records, one of his greatest supporters over the years.

Over the past two decades Bergonzi’s star has steadily risen. He’s played most if not all of the world’s great jazz events, including the Red Sea, San Remo and North Sea festivals. He’s recorded prolifically, as well. By his own count, he’s played on upwards of 150 records as leader and sideman, with more on the way. His latest is Tenor Talk (Savant), a quartet album featuring pianist Renato Chicco, bassist Dave Santoro and drummer Andrea Michelutti.

Today, in addition to a busy performing schedule, the Gonz is a full professor at NEC. He finds fulfillment in teaching. “I’m the eternal student, myself; I think that’s what makes me a good teacher,” he says. As someone who’s constantly striving to improve, he’s still inspired by the great tenor players of the past. Still, these days he’s just as likely to find stimulation elsewhere: “My inspiration is likely to be the last person I heard-a student, a CD, the radio. When I was young, I had an agenda when it came to learning, but now I don’t. I’m open to anything.”

The key, he thinks, is living in the moment. “I try to always be in the present. Yesterday is forgotten, tomorrow is yet to come,” he says. It must work. “I’m happier today than I’ve ever been. I play my own music with great musicians. I’m working all the time. I have a full life.”