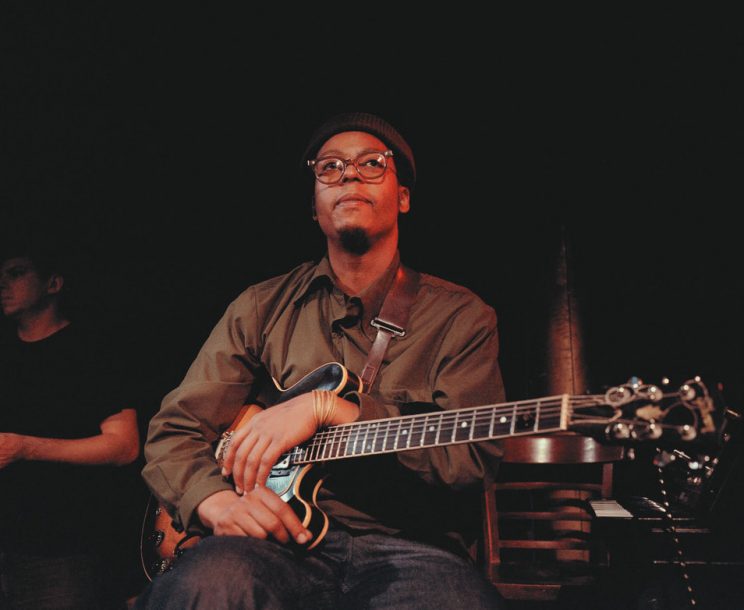 Guitarist Jeff Parker sees nothing unusual about his simultaneous membership in such diverse groups as Chicago post-rock kings Tortoise, current AACM heavies New Horizons Ensemble, jazz-funk experimentalists Isotope 217, as well as his frequent participation in all kinds of improvised gigs around the city. “Everybody’s always like, ‘You play with all of these different bands, but what do you really want to do?’,” Parker chuckles. “Right now, I’m doing exactly what I want to do.”

The 33-year-old guitarist didn’t have such clear notions when he first moved to Chicago in 1991, following a six-year stint in Boston where he studied at Berklee.

Although he was in Boston to become a jazz musician, he’s always possessed a multi-directional musicality. “When I first started playing I was in the jazz band at school, I had my own fusion band with my friends, and then I was in a fucking Triumph kind of band, playing ZZ Top and Led Zeppelin covers,” says Parker, who grew up in Hampton, Va.

After Berklee classmates and housemates like Kurt Rosenwinkel, Mark Turner, Chris Speed and Jim Black began heading to New York to break into the jazz scene, Parker found himself torn when it came time to make his own move. “There’s a certain closed-mindedness that has to accompany the discipline of getting into music, but a lot of people never move beyond that,” he says, referring to the neo-bop purists that Berklee churns out with assembly line precision. “When I was ready to do [new music] in Boston, a lot of people I was around weren’t.” Parker packed his bags for Chicago, taking advantage of then cheap rents and figuring he could make money gigging before inevitably relocating to New York. Nearly a decade later, he’s still around. “I didn’t really decide against New York as much as I ended up liking what was happening here,” he says.

Before long Parker was smack dab in the middle of a young and energetic scene where experimentation, stylistic cross-fertilization and frequent collaboration are commonplace. In fact, he became one of its key figures, nonchalantly linking together various sub-scenes, not only by playing different genres with different groups, but also by bringing a sympathetic musical style to each diverse setting that bridged them all. Yet Parker

insists that such style blending is nothing new, particularly in Chicago, birthplace of the musically omnivorous AACM.

“Chicago has a real tradition of individuality,” he says. “It’s always done its own thing.” He points out that the abundance of professional musicians leads to such interactivity; one gig leads to another, and before long you’re playing every kind of music. Parker treasures such diversity, asserting that each new experience teaches him something.

His growing discography and his live gigs in Chicago during the last year certainly testify to his eagerness to learn. In addition to Tortoise, New Horizons Ensemble and Isotope 217, Parker is a member of the Chicago Underground Orchestra, the Aesop Quartet (with Ernest Dawkins and Hamid Drake), Tricolor (with bassist Tatsu Aoki) and he’s a regular collaborator with tenor titan Fred Anderson. He recently worked on the new album by indie rocker Smog and his recent live work featured him playing with musicians as diverse as scene fixture Ken Vandermark, Flying Luttenbachers’ drummer Weasel Walter, edgy trombone maestro Jeb Bishop and pop chanteuse Rebecca Gates of the Spinanes. He even makes a cameo in the recent John Cusack flick High Fidelity, playing guitar behind Lisa Bonet’s character.

In all of these varied situations Parker neatly tailors his contribution to the situation, but his sound is a recognizable constant. Although the influence of players as disparate as Jim Hall and James Blood Ulmer can be heard in his playing, he truly is a product of all those cumulative experiences.