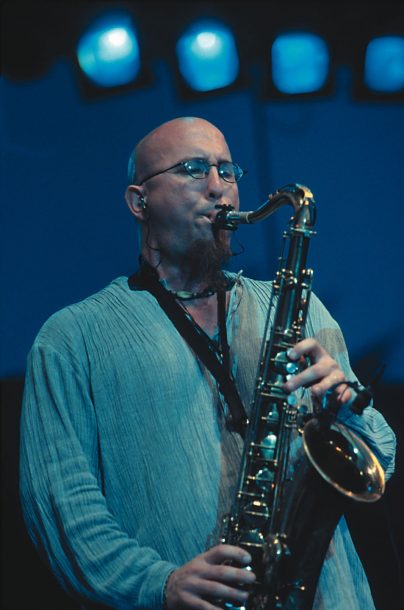 Though he calls his national debut for Compass Records Commonality, there’s not much mundane or predictable about master saxophonist Jeff Coffin’s style. His boldness, intensity, and verve set him apart from other saxophonists and, since March 1997, his work with Bela Fleck and the Flecktones.

“The idea was to have a more intimate setting where I could try some different things compositionally and have a transparency in the sound that would give us a lot of freedom to explore rhythms and different harmonic possibilities without a chordal instrument,” says 34-year-old Coffin. “I’ve been playing with Nashville-based Tom Giampietro [drums] and Chris Enghauser [acoustic bass] for about four years, and on this album we had a lot more room to stretch out. We weren’t in a hurry to get anywhere.” Trumpeter Rod McGaha, a Compass artist who also plays with Max Roach, adds tempered musicality to four of Coffin’s nine originals.

Wielding an impressionistic style influenced by all the sax masters, Coffin is an expressive, idea-rich player who patiently shapes a tune through free-form phrasing and varied dynamics. His trio achieves a like-minded approach. “I consider myself an improvising musician, ” Coffin says. “Every time I pick up the horn, I try to bring something of myself to the table. I’m interested in so many different kinds of music, I can pull from any of those places, whether it’s Indian music, the Beatles, stuff that Bela Fleck has written, or Ornette Coleman.”

Massachusetts-born and Maine-raised, Coffin earned his bachelor’s degree in music education from North Texas State University in 1990, then briefly studied on an NEA grant under Joe Lovano before moving to Nashville in 1991.

Today, Coffin keeps busy teaching privately, running a twice-monthly coffeehouse jam session, leading his large Vibration Arts Ensemble, touring internationally with Bela Fleck, and recording as an all-around studio musician. He expects to tour with his trio during the upcoming year. For more info, check his Web site at www.songs.com/jc.