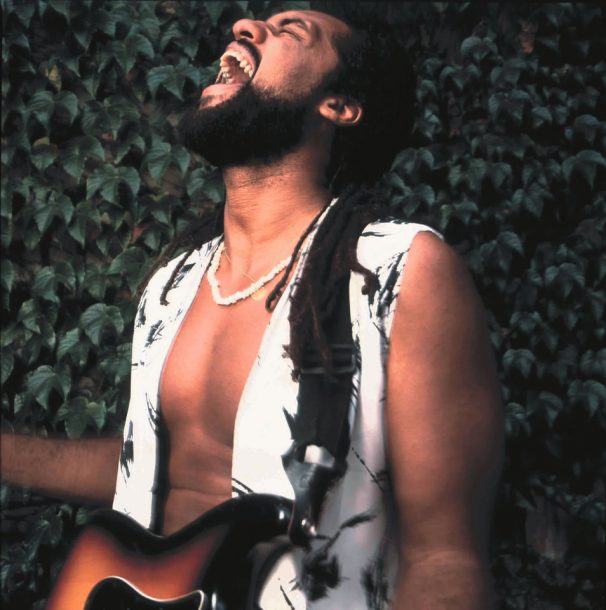 On the Knitting Factory’s Main Stage during a recent and rare trip to New York City, genre-hopping guitarist Jean-Paul Bourelly ripped it up on his sparkling Framus ax with his power trio of electric bassist Reggie Washington (Steve Coleman’s Five Elements) and whirlwind drummer Rodney Holmes (Santana, Zawinul Syndicate). Together they summoned up the ferocious power and jam aesthetic of ’60s rock along with the adventurous spirit of ’70s avant-garde jazz. Special guest Henry Threadgill completed the picture of this modern day Band of Gypsies. Their sound was at once piercing and probing, slamming and swinging, toe-curling and harmonically provocative. Imagine if Jimi Hendrix had lived and gone on to take guitar lessons with Pat Martino while Buddy Miles had woodshedded with a stack of Tony Williams records.

But on the other side of the Atlantic, Bourelly is playing a different tune. Now based in Berlin, the Chicago native and former Brooklyn resident is touring Europe with an African ensemble in support of his latest recording, Boom Bop (recorded on the German PAO label and licensed in the States by Jazz Magnet). An ambitious blend of blues, funk, psychedelia, rap, avant-garde and world-music elements, it represents a place where the spirits of Muddy Waters, Albert King, Jimi Hendrix, Charlie Parker, Don Cherry and Mother Africa dance together harmoniously. Recorded with a core group of Senegalese percussionists while prominently showcasing the charismatic vocalist Abdourahmane Diop (known as the Howlin’ Wolf of Africa), it also features Threadgill on two tracks and tenor saxophonist Archie Shepp on three. Those myriad qualities on Boom Bop fuse most powerfully on pieces like “New Afro Blu,” the Prime Time-ish “Three Chambers of Diop,” the rap-flavored “Invisible Indivisible” and “Kinetic Threadness.”

“Both aspects are part of my musical makeup,” Bourelly says of his African-flavored Boom Bop project and his hard-hitting American power trio. “It’s all the same tree. In terms of the rhythm section, whatever is hitting under me I’m going to react to it differently. I think that’s really what being in jazz is all about: is to be really hearing what’s happening and reacting to it in a truthful way, which should be different each time. So with the underpinning that I have with Boom Bop, the language is different-where the accents would go, what the bass player might play-it’s all different. And then when I get my quartet or my trio going, especially from the American side, that’s another language that I speak fluently. But it’s all part of my vocabulary. It’s all in me, you know?”

The guitarist explains that this latest recording evolved organically over the past couple of years. “I started by playing with Diop and a couple of his drummers, Samba Sock, Siaka and Slam T. Wig. No gigging, just trying to learn off each other. I was trying to learn what they were doing and how they counted, which is totally different. And I was trying to show them how we count. Neither party was ever going to master the other one’s art form but the point was not to develop a music that was just kind of sandwiched together, as you hear in a lot of these collaborations with international multicultural relationships. Instead we were really trying to inspire each other with the other’s cultural experience.”

“So I let Diop check out some of my Stylistics records, and now the guy’s singing falsetto! You’ll never hear a guy from Senegal singing falsetto in a doo-wop style like that. Also I was teaching them different kind of blues scales and blues inflections and they would teach me a lot of their scales, which as a jazz musician I was able to pick up easily. What’s harder is the inflections-which notes they like to bend and how they like to bend them-all those little things that spell out the character of a music. I never tried to copy Diop. I was just trying to get enough of his influence in because I knew once it mixed with my own influence it would come out as something totally different anyway.”