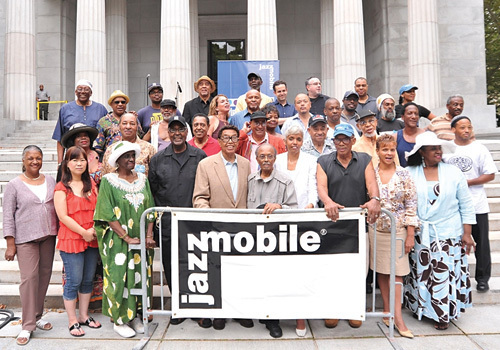 Back in 1964, concerned about jazz losing its audience to rock and pop, pianist Billy Taylor came up with an idea to spread the word about jazz to new audiences. Why not bring the music to the streets and schools, like libraries were doing with their bookmobile? He called it Jazzmobile and, with the help of co-founder Daphne Arnstein, the result was one of the most talked about outreach programs in the history of jazz. The list of musicians who have performed for Jazzmobile programs reads like a who’s who of modern jazz. And it influenced several generations of upcoming jazz musicians.

On Aug. 9, 2009, dozens of jazz musicians, activists and educators associated with the program gathered together for a special reunion at Grant’s Tomb in N.Y.C., shortly before a performance by the Jimmy Heath band. Among the celebrants were Taylor, Heath, Melba Joyce, Jimmy Owens, Randy Weston, Charli Persip, Ray Mantilla, Diego Urcola, Onaje Allan Gumbs, Antonio Hart, Winard Harper and many other community-minded jazz folks.

Although the profile of Jazzmobile may have waned a bit in the mainstream press, the organization is still very much an active entity. This summer the spirit of the original founders is being kept alive by a series of performances in various locations throughout New York City.

Here is a list of performances still to come:

“The Joints are Jumpin'”

For more information about these shows or Jazzmobile, call 212-866-1900 or go to jazzmobile.org.