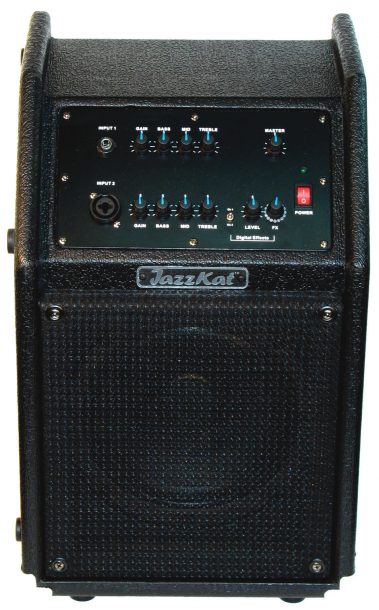 I’ll cut straight to the chase here: The JazzKat, for more reasons than just how it sounds, is one sweet guitar amplifier. There’s a reason John Pizzarelli puts his name on it.

Take a look at Pizzarelli’s tour dates. He’ll work his way up the California coast in a week of gigs, play Nashville a few days later and within two weeks be in the Pacific Northwest for a spate of shows in Seattle. By the end of this year Pizzarelli will have logged more miles than my ’98 Camry’s seen in its life. That kind of tour schedule takes its toll on musician and equipment alike. And the JazzKat was designed to withstand rigorous gigging-not that you notice it straight away.

To be honest, at first blush the JazzKat doesn’t look like a contender. Its sturdy, boxy black enclosure isn’t particularly ugly, but the JazzKat isn’t going to win any beauty contests, either. Devoid of any retro-leaning cosmetics or even neat-looking control knobs, it appears more like a prototype than a finished product. But take a closer look: The swing-out handle on its side is strategically placed so that the amp won’t knock at your knees when you carry it. And-Pizzarelli’s probably figured this out by now-at 11 x 10 x 17 inches, the JazzKat fits in an airplane’s overhead compartment. Plus, with the control knobs set back from the amp’s outermost surface, if the amp gets knocked around, the controls will likely survive the beating. Additionally, one of the amp’s two channels sports one of those nifty XLR/phono inputs to accommodate a guitarist who sings and needs a place to plug in a microphone. That channel is voiced a bit hotter than the other one (to give a mike signal a bit of a push) but guitarists who seek powerful volume levels should be satisfied with what they get out of either channel. Even if you made the switch from the legendarily loud Fender Twin to the 110-watt JazzKat, you could hardly complain about lost headroom. Crank the JazzKat’s main volume control and supply a healthy dose of gain from an individual channel control, and that’s one loud little amp-a tremendous amount of sound comes out of this super-featherweight, 23-pound box.

The amp doesn’t have a distortion channel-it doesn’t need one to appeal to jazz players-and the amp’s creators rightly figured that anyone who wants gritty tone can supply their own stompbox, and effects send and return jacks are included on the amp’s back panel. The JazzKat also supplies 16 built-in digital effects that can be used one at a time and are dialed into the output to taste on either or both channels. The 16 effects range from basic reverb to chorus to a flanger and a nifty rotating speaker sound. Save for a couple of the reverb settings, most of these effects would be better generated from an outside source.

But forget all of that. Weight, design, Pizzarelli’s tour schedule don’t mean squat when the bottom line is sound. To compete with the Ultrasounds, Acoustic Images and AERs in the solid-state, low-weight, high-quality jazz amp market, the JazzKat delivers nothing short of clear, clean and consistent guitar tone from a variety of axes.

Starting the JazzKat’s audition with a Stratocaster plugged into one of its two channels, I was taken with the brightness of the sound-and this was with the three-band EQ set flat. Most straightahead jazz players will employ an archtop in conjunction with the JazzKat, but the amp’s treatment of a standard single-coil pickup signal is divine for anything from punchy funk to crystalline country licks. Jazz tone from an archtop’s neck-position humbucker is how the amp justifies its $949 price tag, however. The amp’s basic jazz tone rings evenly balanced, slightly warmed over with a tubelike quality and maintains clarity at any volume setting. Again, those who come to the JazzKat from a tube amp like a Twin shouldn’t have complaints, as the JazzKat even supplies that X-factor tonal quality that some of its solid-state competition doesn’t achieve. The eight-inch Eminence driver is a proprietary model built by the speaker manufacturer just for the JazzKat and gives the amp a nice amount of punch when you attack a chord with force. The amp’s output is free of noise, which means that the subtle details of your playing really come through. Like I said, there’s a reason Pizzarelli put his name on it. (Pizzarelli’s signature model comes covered in tweed in contrast to the black tolex model shown here.) It’s an inspiring example of amp craftsmanship. Any jazz player with an itch for a new amp best give this one a shot before buying anything else.