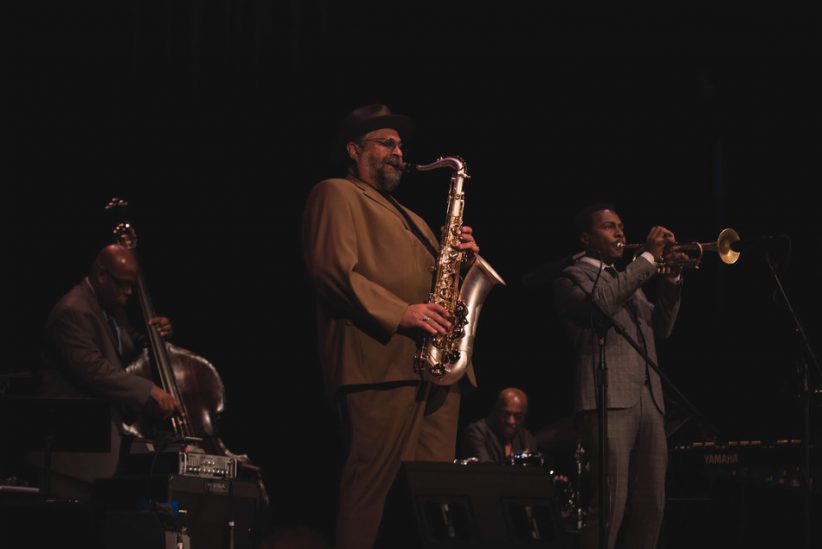 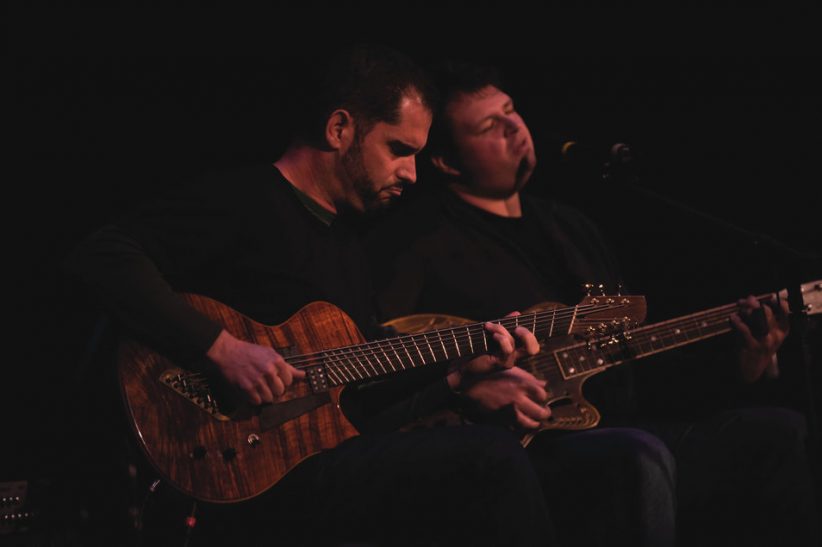 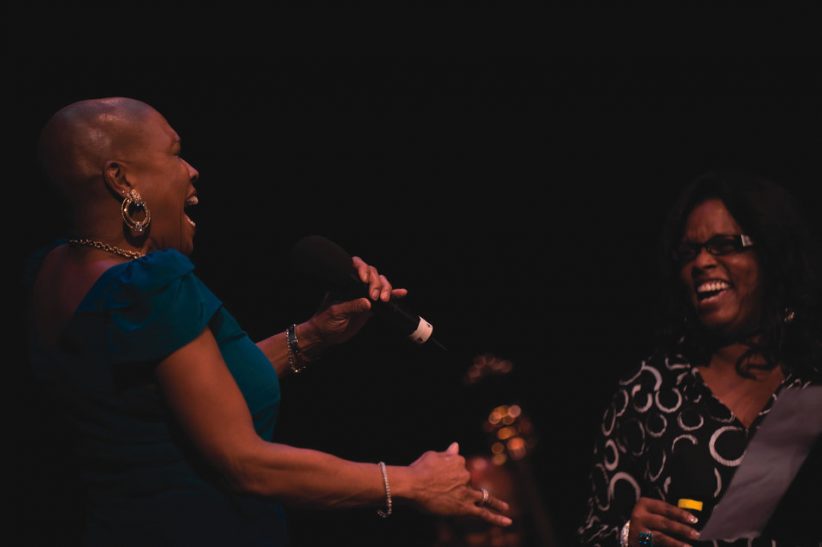 Jazz has long been noted for its ability to transcend borders, age, race, religion and politics, but that didn’t prevent Stefon Harris from making an important distinction during the Oct. 1 “Jazz for Obama” benefit concert at Kaufmann Concert Hall in Manhattan’s 92nd Street Y.

“Hey, you all. I can guarantee you that [this] sounds better than Republican jazz!” said the young vibraphone master, mischievously, after he and his quartet delivered a potent version of Thelonious Monk’s “I Mean You.”

Harris’ quip elicited knowing laughs from the audience of 750, each of whom paid between $50 and $250 per ticket and helped raise $60,050 for Barack Obama’s presidential campaign. Billed as “The Jazz Concert for America’s Future,” the benefit show in the 917-seat venue was the brainchild of pianist Aaron Goldberg, 34, who spoke briefly at the start and deftly performed as part of four different bands during the evening. The concert took place barely a month before Election Day and just one night before Joe Biden and Sarah Palin met in the candidates’ only vice presidential debate.

By turns lighthearted and solemn, poignant and provocative, the two-part musical feast lasted nearly three hours but only rarely lost its focus or ability to inspire. And with such stellar artists as Roy Haynes, Hank Jones, Dianne Reeves and Brad Mehldau on hand, the music spoke louder than the intermittent comments offered by some of the performers.

“We’re here tonight because we are tired of the lying, no-hope, incompetent, unthinking, destructive, willfully ignorant, fear-mongering jive that’s been coming out of the executive office for the past eight years,” said singer Kurt Elling, who ably acted as master of ceremonies, dueted with pianist Laurence Hobgood on the Hobgood-penned ballad “Motherland,” and also sang during the concert’s grand finale.

One of the night’s most moving moments came when Elling read excerpts from “The Edge of the Roof” by Rumi, the iconic 13th-century Persian poet. In just a few stanzas, it captured the hope and the dread that have been stirred up by the fiercely contested race for the White House, if not the soul of our nation:

When you want dessert, you choose something rich.

In wine, you look for what is clear and firm.

What is the rest? The rest is mirages,

And blurry pictures, and milk mixed with water.

The rest is self-hatred, and mocking other people, and bombing.

So just be quiet and sit down. The reason is: You are drunk,

And this is the edge of the roof.

Much of what transpired during the concert managed to be both sober and celebratory, as befits an event that mostly struck a good balance between cautious optimism and a palpable sense of yearning for better days ahead. Accordingly, the song titles themselves took on an added significance. This held equally true whether it was Jones and saxophonist Joe Lovano eloquently essaying the Arthur Schwartz-penned ballad “Alone Together,” the multigenerational Roy Haynes Quintet soaring through a rhythmically intense reinvention of McCoy Tyner’s “Passion Dance,” or Reeves oh-so-slyly invoking a bygone Ronald Reagan campaign slogan with her luminous vocal rendition of Cat Stevens’ 1971 gem, “Morning Has Broken.”

Guitarists Doug Wamble and Charlie Hunter were equally memorable with their sublime version of Sam Cooke’s civil rights anthem, “A Change Is Gonna Come” (which Cooke wrote in 1965 as a response to Bob Dylan’s 1963 classic, “Blowin’ in the Wind”). Where other singers might have belted the lyrics in an overwrought effort to connote “soul,” Wamble wisely opted for a sweetly understated delivery that was perfectly offset by Hunter’s swelling blues lines and Wamble’s incisive rhythm playing on his vintage metal resonator guitar.

Other artists opted for more of a more visceral approach, in particular vocal powerhouse Dee Dee Bridgewater, who delivered a combustible version of Eugene McDaniels’ “Compared to What?” Though written as the Vietnam War heated up in the 1960s and most famously recorded by Les McCann and Eddie Harris for their landmark 1969 live album, Swiss Movement, the song, sadly, sounds no less pertinent today, especially with such charged couplets as:

The President, he’s got his war.

Nobody gives us rhyme or reason.

Have one doubt, they call it treason.

We’re chicken-feathers, all without one nut. God damn it! Tryin’ to make it real-compared to what?

Not all of the selections made as great an impact. Despite a strong vocal and piano performance by, respectively, Bilal and Robert Glasper, who benefited greatly from the often ingenious accompaniment of bassist Derrick Hodge and drummer Chas Dave, a medley of Bilal’s “All Matter” and the Johnny Green chestnut “Body and Soul” was marred, not once, but twice. The first intrusion came with the loud ringing of an audience member’s cell phone, which understandably elicited glares from the nimble-fingered Glasper. Then there was the medley’s 17-minute length, which might have been justified if there had been a greater sense of direction and structural cohesion.

Stanley Jordan sounded similarly diffuse on a Mozart adaptation that went on perhaps twice as long as the guitarist’s ideas warranted. But these were rare lapses during a concert that otherwise had grace and power to spare, be it on the finely modulated version of “Besame Mucho” by Mehldau, bassist Matt Penman and drummer Jeff “Tain” Watts (who also played with equal drive and agility when accompanying Bridgewater and vibraphonist Harris), or Italian singer Roberta Gambarini’s wonderfully fluid, scat-fueled take on Tadd Dameron’s “The Scene Is Clean.”

Reeves and Bridgewater teamed with Watts, bassist Christian McBride and pianist Edsel Gomez for a propulsive version of Mongo Santamaria’s “Afro Blue.” It was a prelude to a grand finale of Thelonious Monk’s “Straight, No Chaser,” which featured many of the concert’s stars, including Mehldau and Goldberg alternating on (and sharing) piano, and Elling, Reeves, Bridgewater and Gambarini on vocals. That the song’s impromptu lyrics included repeated references to “change” and to “the audacity of hope” seemed perfectly suited to both the concert and its inspirational beneficiary. So did Elling’s parting comment: “Straight, no Palin.”