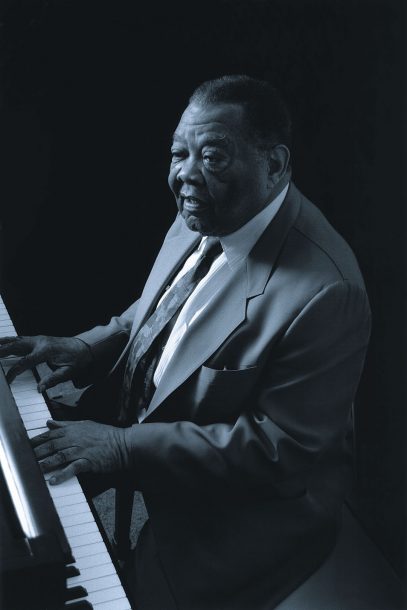 It is remarkable how many leaders in the big band era were piano players. Duke Ellington, Count Basie and Stan Kenton were the major survivors after WWII, but many others-like Fletcher and Horace Henderson, Earl Hines, Claude Hopkins, Luis Russell, Edgar Hayes and Buddy Johnson-either quit, died or took to playing in small groups. Jay McShann and his band were on the verge of big things when he was called into the army in 1943. On his return to civilian life, he re-formed the band, but soon found that post-war conditions were inimical to its continuance.

Earlier, his life had been quietly eventful. He was born in 1916 in Muskogee, Oklahoma, a town of 30,000 that was also the birthplace of such famous musicians as Don Byas, Barney Kessel, Walter “Foots” Thomas and Ellington bassist Aaron Bell. It was Bell’s mother who taught McShann’s sister piano, and indirectly he profited from her instruction. But his experience of jazz on the radio, and particularly the Earl Hines broadcasts from Chicago’s Grand Terrace, were more persuasive. As a youngster, he stayed up late to hear them when his parents thought he was studying. “When Fatha went off the air,” he says, “I went to bed.”

He still couldn’t read music when he went to Fisk University in Nashville, but he had a good ear and subsequent experience with various groups furthered his musical education, as did hearing bands like Bennie Moten’s, Andy Kirk’s and Count Basie’s after he had arrived in Kansas City, These, too, fed his determination to have a big band of his own, and by 1941 he had a good one, with a great star-to-be in its ranks-Charlie Parker. McShann always insists that Parker’s peak was during the four years with him, but fate had an ironic stroke in store. When the band went to record for Decca, the producer was not much interested in its instrumental originals, but wanted emphasis on vocal blues. He got it, too, and a big hit in “Confessin’ the Blues” as sung by Walter Brown.

This hit was partly to determine McShann’s future. He had considerable experience of the blues in Kansas City, where Pete Johnson and Joe Turner reigned supreme. He heard Jimmy Rushing with Count Basie, Mary Lou Williams with Andy Kirk, and Charlie Parker, in his opinion, was the world’s best blues player. Queried about Johnny Hodges, he replied, “Charlie would play a dozen notes where Johnny played one, but he’d make you like ’em, so that made up for the difference in tone.”

McShann’s career in 1944-49 is illustrated to some extent by Capitol’s recently issued three-CD, Kansas City Blues (52047), where he plays on 28 tracks (seven of them previously unissued) with such first-class musicians as Ben Webster, Harold Ashby, John Jackson, Tommy Douglas, Walter Page, Jesse Price and Baby Lovett. Jimmy Witherspoon, with whom he was to enjoy a long friendship, is introduced, and there is even a reunion with Walter Brown.

Experience with the big band, both as leader and as the heart of its fine rhythm section, had given McShann assurance and a rare feeling for tempos and swing. More than 50 years later, after working with many great drummers, he still names Gus Johnson as his favorite. Bassist Gene Ramey, the section’s third member, was another valuable asset as a player and as a wise counselor on personal relationships. Together, these three were as sure-handed on the blues as any rhythm team around.

While McShann’s reputation as a blues and boogie-woogie player was now securely established, he knew that there was more he should know about music, so in 1952 he decided to “go back to school” and study at Kansas City Conservatory under Dr. Francis Boubendork and Dr. Herb Six. Meeting Art Tatum later in California, where McShann enjoyed much success with a small group, also contributed beneficially to his keyboard approach. They became good friends, and McShann would do the driving on nocturnal expeditions to hear other musicians and to enjoy themselves at their “hide-out,” an after-hours place with a good piano. “Tatum would play all that old technique stuff first,” he remembered, “but when he settled down he played the blues.”

Records illustrate McShann’s scope very thoroughly. In the years since the Decca debut, he has recorded on around a score of different labels here and in Europe, where he has frequently toured since his first visit in 1969. His relaxed, easy-going personality has consistently helped to make staunch friends of producers, beginning with Capitol’s Dave Dexter and continuing today with John Norris of Sackville and Hank O’Neal of Chiaroscuro. The 1966 Capitol LP, McShann’s Piano, had wide circulation and served to introduce McShann as the singer he necessarily became in order to answer requests for the unforgotten hits with Walter Brown. He has a similar regional accent and vocal quality, but he sings much better than Brown, with more attention to melodic variety and more warmth and humor.

Today, he is generally recognized as the top blues pianist in the business, but there is unjust limitation in such a description. He plays and sings an extensive range of material besides blues-standards and compositions by Ellington and Waller-with skill and insouciant charm that triumph even on such unlikely vehicles as “On a Clear Day” and “Once Upon a Time.” Essentially, he maintains a jazz tradition. “I do what I do,” he says modestly, “and I hope to continue doing it.” He does it alone superbly, or with bass and drums, or, as on records, with compatible spirits like Buddy Tate, T-Bone Walker, Al Casey, Jim Galloway and Duke Robillard.

Like several other famous pianists, McShann indulges in what might be termed interior scatting while improvising. From some, it emerges as a kind of hummed counterpoint, but his is more guttural. Complimented (with a smile) about the examples on his Piano Jazz album with Marian McPartland (Jazz Alliance TJA 12030), his typical riposte was, “So you like my grunting style, eh?”

Now in his honorable 80s, he paces his activities carefully, but he gets around. He was on hand to play “Hootie Blues” and “The Jumpin’ Blues” when the new jazz museum opened at 18th and Vine in Kansas City on September 5th, and he was set to be aboard the Norway for its floating jazz festival in the fall. Meantime, he made a couple of appearances at the 40th Monterey Jazz Festival, one with Duke Robillard’s quartet. (An excellent CD by this combination is, incidentally, already available on the Canadian label, Stony Plain, SPCD 1237; it was made when McShann was at the Edmonton Folk Festival in 1996.)

The importance of maintaining any kind of tradition is seldom recognized today by newspapers addicted to novelties, sensations and celebrities. In a pre-festival piece, The San Francisco Sunday Examiner and Chronicle advised its readers on September 14th that “Monterey [had] played host to all the jazz greats, from Mingus and Monk to Miles and Trane,” unaware apparently of the far greater greats who had played there, but it did at least refer to Jay McShann as a “blues heavyweight.” Reviewing the festival subsequently in The Los Angeles Times on September 23rd, Don Heckman wrote about music “intriguing and varied enough to satisfy the most discriminating palate” by Don Byron of klezmer fame, by the heavily promoted Diana Krall, by Sonny Rollins with Caribbean rhythms, by the Cuban Arturo Sandoval (trumpet and scat), by Brazilian singer-songwriter Ivan Lins, by Miya Masaoka on koto, and other “performers who arrived with little fanfare” to deliver “ear-grabbing music.” But one musician he didn’t mention at all-you guessed?-was McShann, who, in addition to the set with Duke Robillard, patiently and articulately answered questions about Charlie Parker and the recently deceased Jimmy Witherspoon at an afternoon seminar.

“Nobody likes hometown” was one of Coleman Hawkins’ axioms. Guardians of the tradition, like keepers of the flame, should never be taken for granted.

“I play all kinds of piano, of course, but I have a special liking for Baldwin.”

“I’ve been playing Stride Piano Summit (Milestone MCD-9189-2) and other records by Dick Hyman. It’s just amazing what he can do.”