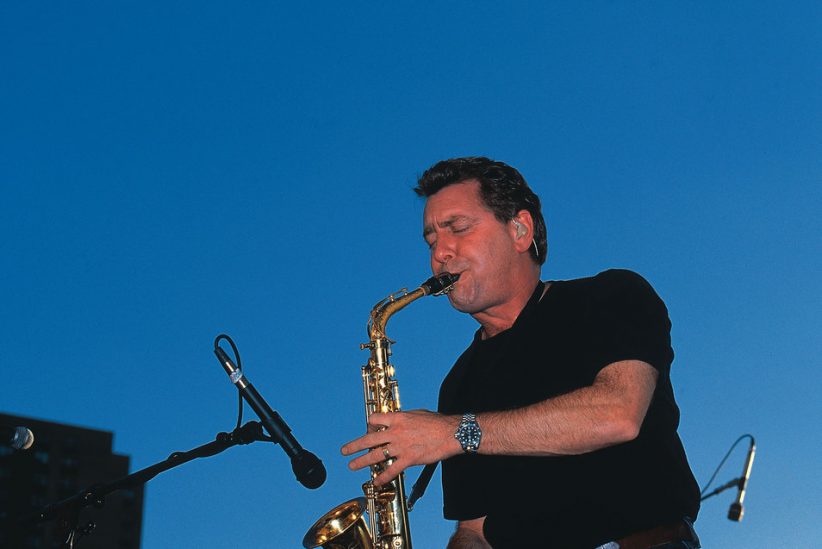 It always seemed inevitable that Jay Beckenstein would step away from Spyro Gyra and record a solo CD. It just never seemed it would take this long.

Eye Contact signals a fresh beginning for the 49-year-old saxophonist, who has signed with a new label, Windham Hill, and clearly hopes to travel in new directions while exploring where his musical interests lead. But even as he gains exposure as a leader, Beckenstein wants to make clear he isn’t deserting the groundbreaking contemporary jazz ensemble he’s been leading for a quarter century and which first brightened the airwaves with “Shaker Song” and “Morning Dance” in the late 1970s. “We really made a lot of good music together,” he says. “I have no interest whatsoever in ever losing that. Furthermore, the guys in that band have become family to me.”

So what took so long, in addition to recording about a CD a year and doing more than 100 shows a year?

“Whenever I’ve asked record companies if they were interested in a solo record they’ve looked at me and said, ‘Well, Spyro Gyra is your project,’ and they’ve always asked what would be different about it. This CD wasn’t so much about the players as it was about the producers. With Spyro Gyra, I’ve been the producer all along. I’ve always felt that being the producer meant that I had control and that the music was going to go in the direction I wanted it to. With the solo record, clearly bringing in other producers would take it to places I might not go.”

Beckenstein enlisted the help of Chieli Minucci, Jason Miles, Jeff Beal and Chuck Loeb. At this point, attentive Spyro Gyra fans may protest: Wait a minute, didn’t Loeb produce six songs on Spyro Gyra’s Windham Hill debut, Got the Magic? He did, but that’s because Beckenstein began writing songs for a solo album when still signed to GRP, which had initially agreed to the project. “I had about nine cuts of the solo record done, and I had already embarked at that point at working with other producers, and working with Chuck in particular. When we came over to Windham Hill, they fell in love with a couple of things I had done with Chuck and those appeared on the Spyro Gyra record. It created a bit of ambiguity that I wish hadn’t happened, but the tunes (including ‘Silk and Satin’) were really successful.” Loeb and Minucci also play guitar on Eye Contact, while Miles plays some keyboards and Beal contributes programming.

Spyro Gyra records also have had Beckenstein’s alto, tenor and soprano out front, but also had major contributions by group members Tom Schuman on keyboards and Julie Fernandez on guitar. Eye Contact is foremost a sax album, of course, and has more of a jazz sensibility than recent Spyro Gyra recordings, as Beckenstein stretches on solos and employs a number of jazz bassists: John Patitucci, Mark Egan, Marcus Miller, Will Lee and Bakithi Kumalo of South Africa. “This gets back to something I couldn’t do with Spyro Gyra,” Beckenstein says. “I couldn’t say, well, gee, this one is just crying for John Patitucci. And ‘The Other Side’ wanted Mark Egan.” Still, the CD should go over well with Spyro Gyra fans-who are used to harder licks and concert jamming-and contemporary jazz fans in general. But the CD really recalls the days when jazz fusion wasn’t afraid to strut its rock influences and experiment while keeping melody in mind.

“Spyro Gyra touched on every conceivable style,” Beckenstein says. “It wasn’t like I had a whole bunch of stylistic ground that was virgin to me. I couldn’t say to myself that I was going to make that Latin album, so it became a lot of little things, like cover tunes. Spyro Gyra doesn’t do cover tunes. They were really important to me when I was young, and here was an opportunity to cover them.” The covers include Joe Zawinul and Weather Report’s “Black Market,” where Beckenstein shows his chops amid chanting and percussion, and Charles Mingus’ “Goodbye Pork Pie Hat,” where his smoldering tenor has never sounded better or jazzier. Beckenstein was one of a few music students selected to study with Mingus at State University of New York in a class on improvisation.

“The solo project got my juices flowing and showed me how easy it was to step out of the Spyro Gyra box,” Beckenstein says. “And I’m looking forward to trying other experiments, working with other artists. Maybe down the road, instead of Chuck co-producing a Jay album, maybe we’ll do a Chuck and Jay album. I recently spent a couple of weeks in Spain and met a couple of South American musicians living there and was really taken by what they were doing musically.”

Beckenstein also wants to produce more music with his Cross-Eyed Bear Productions, having already worked on albums for Tom Schuman and vibraphonist Dave Samuels. Whatever he does, Beckenstein knows he’ll have to manage his time wisely. “The success of Spyro Gyra doesn’t leave much time. And the success of the band is about being on the road.”

The road has been a familiar place for Beckenstein since he formed the group, jokingly named for a species of algae called spirogyra (“It’s got an onomatopoeia sound to it, like spinning or twisting”), in Buffalo, N.Y., in the 1970s. It was a natural progression for a kid who grew up in a house where the official music was jazz. “I had a steady diet of Lester Young and Coleman Hawkins and Bird and Diz and Miles and everyone else. But a couple of people stand out-one is Cannonball, one is Oliver Nelson and one is Stan Getz. But, of course, I listened to ‘Trane, Sonny Rollins and everyone who was playing.” Beckenstein was so immersed in jazz that it wasn’t until he was a teenager that he was exposed to rock ‘n’ roll, turning on to the Beatles like millions of other kids.

Although equally taken with jazz and rock, Beckenstein found his place in the middle, where the mixture of the two styles seemed natural to him as he pursued his musical career. “The boundaries that we kind of come to expect these days didn’t exist so much then. It wasn’t that big of a leap for me from Miles to Hendrix. But today things are so categorized and one would never think of mixing those two styles.” As his musical tastes expanded, Beckenstein evolved also, fusing jazz and rock with world, Latin and Brazilian music, all over a rhythm-and-blues base. “It all kind of hybridized,” he says.

Beckenstein has made his mark in jazz, although he’ll be the first to admit his is a style that isn’t copied much by the new generation of sax players. “I tend to defy description. I don’t really sound like anyone in particular and I ended up with very much my own sound. My particular style has not become the poster-boy saxophone style. When I think of the great saxophonists of my generation, two individuals stand out. One is Michael Brecker, who plays this terrific post-bop everything and also has a great R&B sense and is a tremendous jazz technician. And the other is David Sanborn, who really pioneered an R&B style that is the foundation when you talk about somebody like Boney James. I mean, I’m sure Boney listened to David Sanborn. Mostly when I hear saxophonists today, they tend to fall in the Brecker thing or Sanborn thing.”

Of course, mainstream jazz critics and fans probably wrote Beckenstein off a long time ago. But Beckenstein followed a path he says came naturally to him. “I really thought I was a mainstream jazz player. I never imagined that the idea of combining jazz with rhythm-and-blues, or other rhythms or using an electric bass or using a backbeat, I never thought any of that stuff made it non-jazz or was going to separate it into another category. It certainly has ended up that way. But I thought what I was doing was a perfectly natural step that had been going on for the last 20 years in jazz. I thought we were making mainstream jazz.”

Beckenstein gets defensive when discussing the seemingly uncloseable gap between those who demand their jazz acoustic and others who prefer their music pop-flavored with elements of jazz around the edges. “One camp has been magnetically tugged away from what I used to love about jazz-its adventurous spirit, its willingness to take risks. Contemporary jazz has been pulled away from that, and I’m sorry for that. And I won’t be pulled along; I intend to make interesting music. At the same time, the other camp, guess what happened? They don’t support adventurous music, the right of a musician to play whatever he wants. The other side of the coin has become as stodgy as the worst classical music school you could imagine. I laugh hysterically at anyone who thinks it can’t be jazz without an upright bass. Excuse me? But there actually is a group that has harmed the music, that has tried to be extremely pure but that has only accomplished stagnation.

“The reason why I loved jazz as I was growing up was because I could look forward to every single year the music sounding different than the year before. In the late 1950s and early ’60s, when I was really formulating my musical mind, I watched Miles Davis put eight records out in a row, each one being a brand new and incredible journey. I thought that if he wants to mix rock ‘n’ roll into it, well, that’s just the way it is. What kills music is trying to put it in a box, because the thing that breathes life into it is its willingness to change. As soon as you say it should be paying homage to the masters, OK, I’ll buy that. But then you have to buy that the music has become Bach, that it’s become a tribute to dead people. It’s getting to be museum music.”

While he is unsure of the model numbers, Beckenstein plays a prototype Yamaha alto sax and a Yamaha custom tenor sax, a Keilwerth soprano sax and an L.A. Sax alto. He uses a Vandoren Java #3 reed for his tenor and a #3.5 for his soprano and altos.