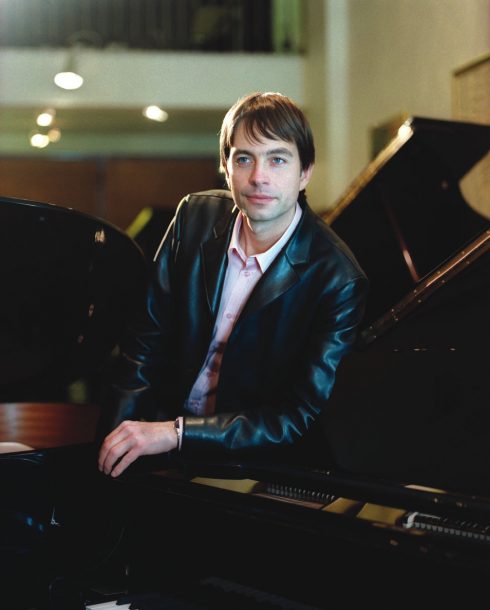 Swedish pianist Jan Lundgren concentrates on melding the bebop tradition and the great American songbook with the music of his homeland.

“Such a fundamental part of my love for jazz is based on American players that it’s very hard to ignore,” he says. “Still, when I’m talking about developing the Swedish side of myself, I want to mix these things. The Swedish are very calm people, but there’s a lot of temperament beneath that might not show immediately. You know, ‘Don’t wake the bear.’ I’m a typical Swedish guy.”

A typical Swede, perhaps, but by no means a typical jazz player, Lundgren has defined his musical interests on 11 albums as a leader, recording for Fresh Sound (Spain), Sittel (Sweden) and Alfa (Japan). He has appeared on more than 40 CDs as a sideman with the likes of Herb Geller, Bill Perkins, Arne Domnérus and Conte Candoli. His most recent CDs are Plays the Music of Victor Young, featuring Johnny Griffin, Stacey Kent and Deborah Brown, and the trio date For Listeners Only; both are on Sittel.

Lundgren heard Oscar Peterson for the first time at 14, played in a band within a year of that experience and faced the decision at 15 whether to become a jazz pianist or a professional tennis player. In 1979 Lundgren’s power and skill on the court won a national competition and the prize of intensive study with Björn Borg, Sweden’s winner of five straight Wimbledon championships. Tennis ultimately lost-point, set, match-to the examples of Peterson, Bud Powell, Bill Evans and McCoy Tyner. At 36, Lundgren’s creativity and flexibility bring raves from musicians and critics who rarely rave.

The late pianist Lou Levy, a skeptic by temperament, said of Lundgren, “He goes to the source of the music, interpreting it as the composer meant it to be played. A lot of top pianists don’t do this.” Drummer Billy Drummond, who with bassist Peter Washington has played on two of Lundgren’s Alfa CDs, says, “Jan really had a vision of what he wanted and a firm grasp on styles. He’s a great piano player.”

Alto saxophonist Herb Geller asked, “How do I describe his taste or his awareness in accompanying another soloist? I feel indeed fortunate to have had his exquisite harmonic sense, perfect timing and intuition. He has inspired me to some of my finest performances.”

When tenor saxophonist Bill Perkins was planning his 1995 tribute to Lester Young, Perk Plays Prez (Fresh Sound), he and producer Dick Bank looked for someone who understood the essence of the pianists on Young’s classic recordings. They chose Lundgren, whom more than 50 Swedish critics voted musician of the year in 1994. Perkins says that Lundgren “captured the spirit of Count Basie and Teddy Wilson superbly, without doing a slavish imitation. That would indicate to me a musician who has done a lot of listening and absorbing. Nevertheless, Jan is a thoroughly modern pianist, with an unerring grasp of harmony, rhythm and dynamics.”

Lundgren’s other honors include the Golden Record award for the best-selling Swedish Standards (Sittel, 1997) and the Sigma Award of the Duke Ellington Society. In 2001, he was nominated for the second time for the Swedish Django d’Or Prize (Contemporary Star of Jazz).

The pianist keeps himself and his trio, which includes bassist Mattias Svensson and drummer Rasmus Kihlberg, very busy. Lundgren’s seven visits to Los Angeles have included a gig at the Jazz Bakery and nine recording dates. He has recorded twice in New York. In 2000, Lundgren played in the “Swedish Jazz Salutes the U.S.A.” concert at Carnegie Hall, an event he suggested. The trio plans to tour Sweden, parts of Europe and Japan this spring and summer, and Lundgren is currently researching the songs of Jule Styne for his next CD, which will feature music of the great show-tune composer treated with bebop sensibility, Swedish melancholy and his own kind of melodic freedom.

Of his desire to further integrate into his playing the ethos of Swedish music, Lundgren speaks of vemod, which translates as “tender sadness.” The trait has long been familiar to U.S. listeners in “Ack Värmeland du Sköna,” brought from Sweden by Stan Getz and known here as “Dear Old Stockholm.” Discussing Art Farmer’s celebrated 1964 collection of Swedish songs, To Sweden With Love, Lundgren says, “I think it’s a great album, but it brings American melancholy to the Swedish songs. Swedish musicians would have played it differently. I’m thinking of people like Arne Domnérus and Lars Gullin, Jan Johansson and Bengt Hallberg. They all have the quality I’m trying to define that is so hard to put into words, that Swedish thing, maybe our own kind of melancholy. This is what I’m trying to express in our trio’s music, along with the bop feeling.”