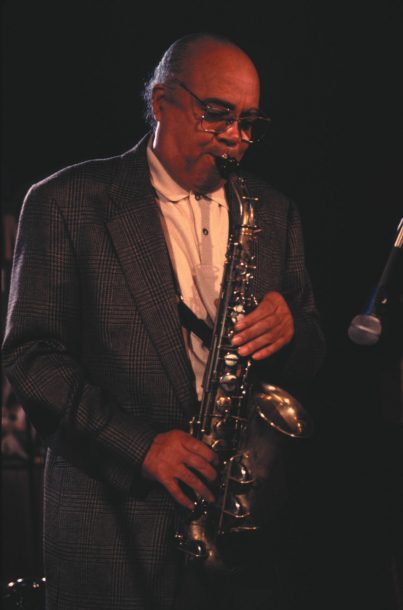 Cross-generational part-nerships seem rare these days. But just such a relationship has been fruitful for veteran reedman James Spaulding. His 11-year hook-up with David Murray finds him playing a valuable role in Murray’s octet. On the wings of his latest Escapade, (HighNote), Spaulding is playing a series of collaborative gigs between the David Murray Octet and the superb Urban Bush Women dance troupe. “David is incredible with the stuff he’s writing and involved with,” Spaulding enthuses. “He likes the way I’m able to go in and out of the chords like he does; it’s just another extension. When I think back on Sun Ra, I think about those extensions related to David’s approach, the way he gets into his tenor and bass clarinet.”

David Murray, Sun Ra, Freddie Hubbard, Max Roach, Milt Jackson: a handful of the many fertile bandstands that have welcomed Spaulding. A true MVP sideman, the Indianapolis-bred Spaulding has carved out a richly varied musical experience with his accomplished alto sax and flute playing, a currently rare doubling duo since soprano sax is most players’ second axe of choice. Fortunately, he came along at a time when instruments were plentiful in schools and, though steered to the clarinet by the band director, he also picked up the flute out of pure curiosity. Years later he came under the flute tutelage of Professor Emil Eck, late of the Chicago Symphony. “He corrected me on a lot of bad habits I had developed,” Spaulding chuckles.

Spaulding plans a return to the clarinet but, for now, plies his trade principally on the alto sax, flute and, on Escapade, the dark richness of his bass flute. He alternates the three tools on the Don Sickler-produced date, playing tunes by Hank Mobley, Kenny Dorham, Dexter Gordon, Duke Ellington and Grant Green, as well as a couple of old war-horses for great measure. “I’m just gathering all of the experiences I’ve had in the past, from when I was in the Army bands, on up to Sun Ra, to the rhythm & blues bands I was in, right up to David Murray,” Spaulding says of his playing on Escapade. “I try to put all those energies and thoughts together.

“Don Sickler really introduced me to Hank Mobley’s music and to Kenny Dorham’s music, and I said, ‘Wow, this is a perfect thing for me to get into,’ because I really had a chance to get involved with their structure and their music.”

A veteran of classic Blue Note sessions-including having performed Escapade’s “Grant’s Tune” on a Grant Green date-the CD reflects the spirit of those times. “The energy of these players, Ray Drummond, John Hicks-guys already familiar with that kind of playing-and [trumpeter] Don Sickler, it was just a wonderful feeling. [And] the choice of material, that’s what’s important, isn’t it?”