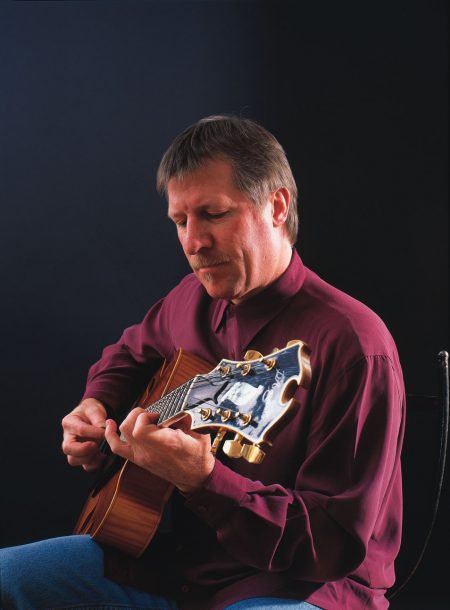 The odds are pretty good that James Emery is practicing right now. The guitarist is a renowned practice demon. He’s been like that for decades, going back to daily marathons with bassist John Lindberg in the late-’70s heyday of Woodstock’s Creative Music Studios, and before. It has engendered an ease and precision in creating music seemingly too complex to be made with a plectrum.

Emery’s dizzying serpentine lines are a hallmark of the String Trio of New York, which he co-founded with Lindberg in 1977, and, more recently, a succession of his own groups, the most recent being the sextet featured on Luminous Cycles (Between the Lines). Emery’s playing also comprises the genome of a technically demanding compositional style that demands hours of woodshedding from his groups. From the clean execution of a hair-raising run to the sleek contour of an ensemble, everything about Emery’s music has a clear genesis in a rigorous practice regimen of honing his own ideas and revisiting the work of masters like Monk.

Recently, however, Emery’s practice schedule has been trimmed by the hours required to compose a new work, “Transformations,” for the Vienna-based Klangforum chamber orchestra and three jazz soloists-himself, trumpeter Franz Koglmann and a yet to be determined saxophonist (the piece is on track for eventual release by Between the Lines, and the CD will be rounded out by small group pieces including a quartet project with Joe Lovano, Judi Silvano and Drew Gress that has already been recorded). This is Emery’s first piece for orchestra written from scratch. Previously, he orchestrated “Cobalt Blue,” a longtime String Trio staple Emery also included on his ’97 Enja quartet date, Standing on a Whale Fishing for Minnows, for the String Trio’s 2000 Constitution Hall performance with the Air Force Band, whose generic name obscures its symphonic dimensions. Emery did something similar when he reworked the quartet disc’s title piece for septet on Spectral Domains (Enja; 1999). In both instances, Emery did not want to try to create new music while learning the idiosyncrasies of a new format.

“Orchestration is tough,” Emery says. “So I followed Ravel’s example. Much of what he wrote were orchestrations of solo piano pieces, so he could run wild with them. But even if you have already written the basic material, orchestrating it can take a long time. It took Stravinsky two years to orchestrate ‘The Rite of Spring’ from the version for two pianos. Using ‘Cobalt Blue’ the first time out turned out to be a wise move, because I would be in much worse shape writing this new piece without that prior experience.”

If Emery’s writing on Luminous Cycles is any indication, his score for Klangforum’s seven strings, three brass, seven woodwinds, piano and two percussion will be an intricately layered, rhythmically charged work. On pieces like “En Rapport,” Emery overlays rhythm-shifting motifs, phrase shapes that alternately jab and glide and a variety of tangy asides like a momentary clarinet and vibes unison. The resulting weave is made richer by Marty Ehrlich and Chris Speed, who play five wind instruments between them, as well as the percussion tandem of Kevin Norton and Gerry Hemingway (bassist Drew Gress rounds out the ensemble). Emery wants to retain the fluidity and flavors of his sextet music, despite how thoroughly different the process is to write for classical musicians he has yet to meet.

“With the compositions on Luminous Cycles, I was able to write each part as I went along, mostly because I know what the players can do,” Emery says. “Six or seven players are not that far removed from a trio or quartet-settings I’m used to writing for. Writing 24 parts involves a whole different distribution of information. Keeping a cohesive line of thought becomes much more complex. So I try to write as much music in five or six parts as fast as I can, with as much detail as possible. Then I can begin to orchestrate without having to think about what I’m going to do next. Musically, it’s already figured out. I can just focus on how it will sound.”

Given the commitment to write a half-hour-long piece, Emery also made the strategic decision to divide the work into five movements, which gave him a more manageable structure to develop his materials. This, in turn, presented the challenge of devising a method through which he could transform the five movements into a continuous, organic piece of music. Ever the student of the jazz tradition, Emery turned to a reliable source-Gil Evans. In the master colorist’s work on Miles Davis’ Miles Ahead, particularly Evans’ use of long tones as connective tissues, Emery found the means to buttress a piece that spans brisk virtuosic sprints to evocative balladry.

“I have a whole new respect for Gil,” Emery admits. “After years of writing primarily for the String Trio, and trying to wring every last color possibility from that combination of instruments, to have all these choices is sometimes overwhelming. My experiences with the sextet and septet have come in real handy, but the doubling in this chamber orchestra is incredible. In the preliminary orchestration of the first movement, I’ve got it scored for two flutes, oboe, two clarinets, bass clarinet and bassoon. For the second movement, I’ll use flute, alto flute, English horn, E-flat clarinet, clarinet, bass clarinet and bassoon. But you also have to constantly remember that you can’t just use all these instruments because they’re there. They have to fit the music. You have to find the appropriate voice for each part. That’s the genius of Gil Evans. Right now, I’m dealing with how to use a contrabassoon, or whether to use it at all. It’s there, so I gotta use it, right? And it just so happens I’m a big fan of Ravel’s contrabassoon part on ‘Ma Mère L’oye’-the low notes make the floor shake.”

Emery acknowledges that the process of writing such a piece takes him far afield of the spark and immediate feedback of playing with his sextet and the STNY, whose new violinist, Rob Thomas, Emery says, “has something of the same harmonic virtuosity and intensity that is always associated with Coltrane.” It is a labor of love that has its share of toil, as it entails an immense amount of trial and error, and enough repetitive motion to provoke an OSHA investigation. Still, Emery knows from his transcriptions of Monk’s piano solos for guitar that the swing is in the details that are often so excruciatingly difficult to get down on paper. For Emery, the goal is to have the composition come off the assembly line and run like a deer.

“Even though I’m dealing with issues like whether or not to have a contrabassoon part, my music is still coming from the same place my music has always come from,” Emery contends. “There is a lot of improvisation in the germ material, and I focus on that improvisational flash as I go through procedures like writing out complete drum parts or accommodating limitations of certain instruments; you can’t give a French horn certain types of parts that are too fast and are all over the place in terms of pitch. And they are classical players-I can tell them to do things like low trills or high glissandos, but they’re not improvisers in our sense of the term. So I have to be as specific as possible with articulations and dynamics, which in a way takes me away from improvisation, but it’s the only way that I can keep that kind of spirit in the piece.”

Orchestration entails processes of experimentation and scrutiny that tranform composers into the musical equivalent of an Underwriters Laboratory analyst. Can this motif withstand the pressure of having extended harmonies stacked upon it? Does this phrase really turn a deeper blue if played by a clarinet instead of an alto saxophone? Will these voicings atomize under the G-forces of double time? For Emery, orchestration is a severe test of his writing, one that goes beyond determining the durability and flexibility of his materials. It has made him more stringent about what he calls “stock material, the regular stuff. I’m really after the irregular stuff that is still unmistakably mine. It’s another thing I love about Gil Evans, the way he always put something into an arrangement that’s really different, but is still obviously Gil Evans.

“Ultimately, I think a lot of the music somebody comes up with is given to them. It comes from somewhere else, or out of nowhere. When does playing with it, moving this around or manipulating that around in various ways, turn improvisational processes into compositional processes? It’s hard to say where that point is until you’ve crossed it. All I try to do is put down the music coming through me. That’s hard, generally, but it’s really hard when it’s coming fast. I have to get it down before it goes, and it does go fast sometimes. The trick is holding onto something long enough to write it down as you first heard it.”