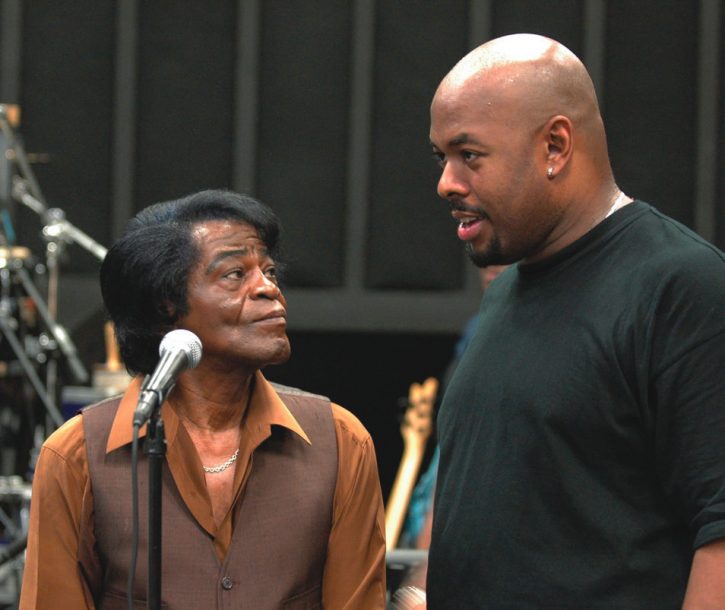 For close to half a century, James Brown represented that rare type of artist whose music created an impenetrable force around the listener. When you listened to James Brown, you felt strong, bold, almost immortal. From personal experience, I can tell you that being around James Brown was the equivalent of trying to walk on the sun. He was that powerful. He demanded to be called “Mr. Brown.” Why not? But he was quick to call everyone else “Mister” as well. With Mr. Brown-as well as all men and women from his generation-you had to earn respect. You just didn’t wake up one day and decide you should be respected.

I was first awarded an opportunity to earn Mr. Brown’s respect in 1995. Verve Records had just released my first CD, Gettin’ to It, whose title track, of course, was inspired by James Brown’s hit, “Get It Together.” In fact, I was very scared that James Brown might actually try to sue me when he heard it, because it was awfully close to “Get It Together.” However, when he heard it, he was more appreciative than anything else. He was actually somewhat surprised that so many jazz musicians enjoyed his music. Guess what, Mr. Brown? All jazz musicians enjoy your music-at least the ones who like rhythm!

I was able to spend lots of personal time with Mr. Brown in New York, and in his hometown of Augusta throughout the ’90s. Much of this time with him was centered on his love and appreciation for jazz. He was partial to “hard-hitting” jazz-Art Blakey & the Jazz Messengers (specifically with Lee Morgan); John Coltrane’s classic quartet (“as long as it didn’t get too out,” he would say); Jimmy Smith and Horace Silver; and much to my surprise, he loved Chick Corea. Before he ever heard me play a note, I remember him saying to me, “You must love Ray Brown, huh?” Yes, James Brown knew his jazz.

For a moment there, Mr. Brown and I fell out of touch. It became increasingly harder for me to speak with him directly. I always had to leave messages with him through his manager. But, hey, I didn’t mind. This was James Brown, after all. All that changed in 2005, when I was named the Los Angeles Philharmonic Association’s Creative Chair for Jazz. Instinctively, my first reaction was to use all of my newfound clout to work with James Brown. The person who got the ball rolling was my dear friend-the legendary trombonist Fred Wesley. I told Mr. Wesley my idea, and he put me in touch with Mr. Brown’s longtime manager, Mr. Charles Bobbit.

I told Mr. Bobbit that I wanted to put Mr. Brown at the Hollywood Bowl singing the material from the Soul on Top album (arranged by Oliver Nelson) with a big band with me playing and conducting. Mr. Bobbit gave me a chillingly long pause and said, “…well, Mr. McBride, you know how Mr. Brown is. That’s going to be a hard one. I personally think it’s a great, great idea, but…I don’t know. You know he doesn’t work with anyone else’s band, and he certainly won’t let you be the musical director, but I’ll tell you what-let me work on him.” I hung up the phone happy that I at least knew Mr. Bobbit thought it was a good idea. The following days waiting to hear back from Mr. Bobbit were long! Finally, about a week later, Mr. Bobbit called and said, “I’m still working on him. Just hang tight.” This went on for about two months! Finally, that fateful day came on Oct. 26, 2005, when Mr. Bobbit called my cell phone and left a message, saying “Hello, Mr. McBride. Well, I think I talked him into it. He wants to do it. You and him doing Soul on Top at the Hollywood Bowl next summer. Call me later.”

Man, the world stopped for about 30 seconds as I stood there in shock!

Less than a year later, on Sept. 6, 2006 at the Hollywood Bowl, my most gargantuan dreams unfolded right before my very eyes. James Brown singing the music from Soul on Top with me playing and conducting. Doesn’t get any better than that. We had so much fun. Yeah, there were a few clunkers, but he had nothing but fun. Louie Bellson came out and played “For Once in My Life” with us and did an awesome job. At 81, he’s still swinging hard. Mr. Brown and the big band continued to perform all of the tunes we rehearsed except “If I Ruled the World,” which Mr. Brown decided he didn’t want to do. In between each song, Mr. Brown did a little rapping to the audience, and would end his rap by saying stuff like, “Mr. McBride, it’s time to go to work,” or “Let’s do it, gentlemen,” or my favorite one “You got it…brother!” We ended the Soul on Top portion of the program with a funky and rousing “September Song.” During the vamp, James Brown sang, “Give the bass player some! Give the bass player some!” I wish I could have enjoyed that moment a little more, too, but I guess I had to take a solo, huh? Toward the end of my solo, JB and I got into some call and response like he used to do with Fred Wesley and Maceo. Sigh…

Then…the show was over. Just like that. I’d spent 75 minutes onstage at the Hollywood Bowl with the most influential living musician on earth, James Brown. I lived my dream. I played for him. I conducted for him. I was his musical director onstage. What do I do now? What could possibly top this? Nothing. Absolutely nothing.

I called Mr. Bobbit the morning after the show, and he said, “Maaaaaan! You have no idea how much fun Mr. Brown had last night. He’s been talking about it all morning!” That made me feel good. I said, “Well, you tell Mr. Brown that we’re going to do it again soon.” Mr. Bobbit said, “I know he’d like to hear that!”

Sadly, we’re not going to do it again, but I can say that on one night in September I lived my dream. I shared the stage with the Godfather of Soul, Mr. James Brown.