Skip to content
Become a member and get exclusive access to articles, live sessions and more!
Start Your Free Trial
Home > JT Archives > James “Blood” Ulmer: Blood on the Tracks 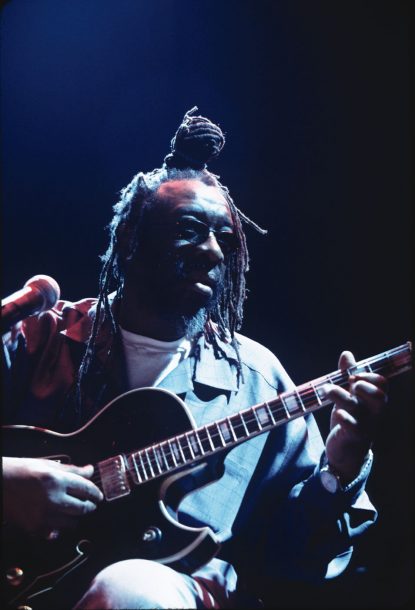 Guitarist James “Blood” Ulmer and producer Vernon Reid went into the studio, sans backing band, to document one man, one guitar, one voice. What they came up with is Birthright (Hyena), a chillingly dramatic document that taps into the very essence of the blues.

“Solo blues is the first kind of blues,” says Ulmer, a son of St. Matthews, S.C., who was taught music by his father, the leader of the gospel band the Southern Sons. “Solo blues was kind of wiped out by band blues, and in the stamping out of solo blues I think it lost the real meaning of what blues was all about. Because when the band got ‘hold of the blues, it became more about entertainment. People began to dance to it, and the message of the blues got lost.”

Ulmer delivers his message in very direct terms on the album’s opener, “Take My Music Back to the Church,” as he moans: “I’m gonna take my music back to the church / Where the blues was misunderstood / Some people think that it’s the song of the devil / But it’s the soul of a man for sure.” Elsewhere, Ulmer addresses matters of earthly pleasures, sanctity and redemption on stirring confessionals like “The Evil One,” “Devil’s Got to Burn” and “My Most Favorite Thing.” He also turns in stirring covers of Willie Dixon’s “I Ain’t Superstitious” and “Sittin’ on Top of the World” along with radical reworkings of two of his own tunes, “Where Did All the Girls Come From?” and the folkish “Geechee Joe,” from his 1981 masterpiece, Freelancing (Columbia).

His “White Man’s Jail” is a response to a tune he had previously written for the 52nd Street Blues Project recording Blues & Grass (Chesky). “On that album I wrote a song for Queen Esther called ‘Queen Esther’s Blues,'” Ulmer says. “In it she describes the man that she wanted to have. So she sings, ‘I’m looking for a man who ain’t never been in no white man’s jail / Ain’t been to no white man’s school / Ain’t learned the white man rule.’ And the way she sounded, man-I wanted to be that man! So I wrote this answer to her where I sing, ‘I ain’t never been in no white man’s jail / I ain’t never learned the white man’s rule / I ain’t been none of that / What about me?'”

Each piece on Birthright is sung in Ulmer’s characteristically raw, husky voice and performed on his black Gibson Birdland, with the bottom E string tuned down to a low A to provide a deep drone that anchors his jangling chords and staccato single-note lines. Ulmer does showcase his Ornette Coleman-influenced harmolodic approach to guitar on two instrumentals, “High Yellow” and “Love Dance Rag,” although for him there is hardly any separation between real-deal blues and harmolodics. “I think blues has something to do with being the backbone of harmolodics. There’s a freedom there. Harmolodics is free music played by ear, so it’s the blues.”

Ulmer and Reid made two other successful blues collaborations prior to Birthright: 2001’s Grammy-nominated Memphis Blood: The Sun Sessions (Label M) and 2003’s acclaimed No Escape From the Blues: The Electric Lady Sessions (Hyena). But the guitarist isn’t just stuck in the blues. He appeared with James Carter’s organ trio, with special guest Hamiet Bluiett, for a live gig at the Blue Note in New York that was documented on Out of Nowhere on HalfNote, and he played with alto saxophonist Arthur Blythe at another Blue Note engagement. At last year’s Vision Festival in New York Ulmer tore it up in a sizzling power trio with drummer G. Calvin Weston and electric bassist Jamaaladeen Tacuma (a fellow Ornette alum and former bandmate in the Music Revelation Ensemble). Ulmer is also anxious to reunite with drummer Rashied Ali, pianist John Hicks and bassist Reggie Workman in a group they had together a few years back.

“I can’t change my way of living because I made a blues record,” Ulmer says. “I have a whole other agenda that don’t have anything to do with this blues stuff. I love playing with Jamaal and Calvin, I love playing with the Memphis Blood band and I want to keep playing that swinging free harmolodic music with my boys [Hicks, Workman and Ali]. So I can’t stop wanting to try and make these other things happen. That’s the only way I can stay alive.”