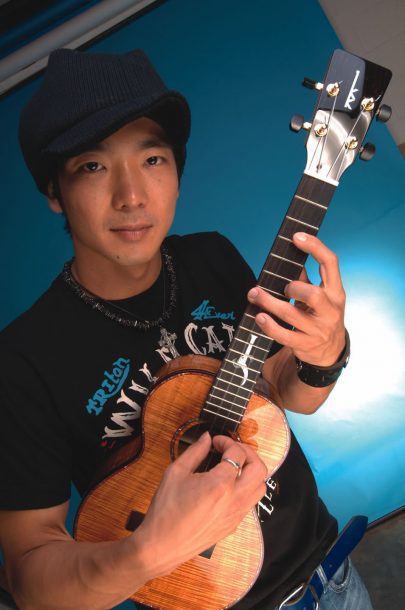 Jake Shimabukuro may be the first jazz musician to gain a pop following via the Internet sensation Youtube.com, which makes streaming video instantly available. Aptly situated on a rocky outcropping in Central Park’s Strawberry Fields, the Hawaiian-born ukelele master is caught in the act of turning George Harrison’s White Album classic “While My Guitar Gently Weeps” into a scorching solo tour de force. With close to 100,000 hits, the four-minute clip served as a savvy preview of his first solo album, Gently Weeps, which hit stores in September. In truth, Shimabukuro isn’t a jazz musician per se, though jazz is certainly one facet of his ever-expanding musical persona. A gifted improviser who is perfectly comfortable reharmonizing American Songbook standards, Shimabukuro is a dues-paying member of what Bela Fleck calls “the odd instrument club,” a loosely affiliated group of musical explorers determined to turn theirs axes into all-terrain vehicles.

Over the past six years, Shimabukuro has transformed the diminutive four-string uke into an infinitely pliable instrument, capable of generating everything from crunching, effects-laden rock to sensuously swinging jazz. Along the way he’s shared stages with a plethora of artists, including fingerstyle guitar star Kaki King, vocal wizard Bobby McFerrin, mandolin master Mike Marshall and fiddle renegade Darol Anger. In a conversation last spring in San Francisco, he had just returned from a stint at the New Orleans Jazz & Heritage Festival, and he was still buzzing from four non-stop days of making music.

“I got to sit in with a lot of Dixieland bands and I played with Jimmy Buffet in front of 120,000 people,” said Shimabukuro, grinning at the memory. “I was so scared. I was only looking at Mac McAnally, the guitar player, or down at the ground. I played at the House of Blues with Keller Williams and I opened for The Radiators and then got to sit in with them. I also I opened for Ivan Neville. Man, talk about the funk! We crammed three weeks of stuff into the four days we were in New Orleans.”

New Orleans is just the latest pinnacle in a career that’s been on a rapid upward climb since the summer of 2002, when he signed with Sony’s Epic Records International, a label with a strong presence in Japan. Shimabukuro has won a huge Japanese following in recent years through more than two-dozen tours of the country. And he became a hometown hero when his first CD, Sunday Morning, won Instrumental Album of the Year at the 2003 Na Hoku Hanohano Awards (Hawaii’s Grammy), where he was also named Favorite Entertainer of the Year, honors he repeated in 2004 with his second album, Crosscurrent. More importantly, Shimabukuro’s status in the unofficial but tight-knit fraternity of maverick string players was cemented when banjo master Bela Fleck asked him to record on the Flecktones’ album Little Worlds, and then invited him to tour with the band as an opening act. For fiddler Darol Anger, Shimabukuro is the latest champion “bringing the string community back into the forefront of modern music.”

Shimabukuro’s previous releases, like 2005’s Dragon (Hitchhike Records), seemed to favor instrumental pop over jazz. But when Shimabukuro performs on the mainland under his own name, he’s generally working solo, which is the context in which he’s most dazzling.

While he spent several years experimenting with effects and electronics, he’s returned to his acoustic roots, displaying his seemingly casual virtuosity in an unplugged context. Rocking back and forth on his heels and swaying from side to side, he enters another world as he plays a mix of original pieces and standards, his wrist moving in a hummingbird blur.

“In the last several months I’ve become a purist,” Shimabukuro said. “I found myself relying so much on my effects to fill up the sound and to keep the show interesting. It got to a point where I felt like I can’t play without my pedalboard, I need this and I need that. I wanted to break away from that and learn how to play my instrument again, because that’s what it’s all about.”

Shimabukuro’s new album, Gently Weeps, is a jazz-inflected statement that he feels will mark the end of one phase of his career. Instead of constantly making a case for his instrument’s rightful inclusion, he wants to focus on producing and composing. He hopes to work on film soundtracks and collaborate with vocalists-ambitions that go far beyond gaining recognition as the baddest ukulele player on the planet. Looking at the role models he’s chosen, Shimabukuro is on the right track.

“Guys like Bela Fleck, Mike Marshall, Darol Anger and Victor Wooten, they just take their instruments and run with it,” Shimabukuro said. “They don’t let anyone tell them ‘You can’t do that.’ They find a way, and that’s what it’s about. You have the desire, you have that passion and you find a way to make it work.”