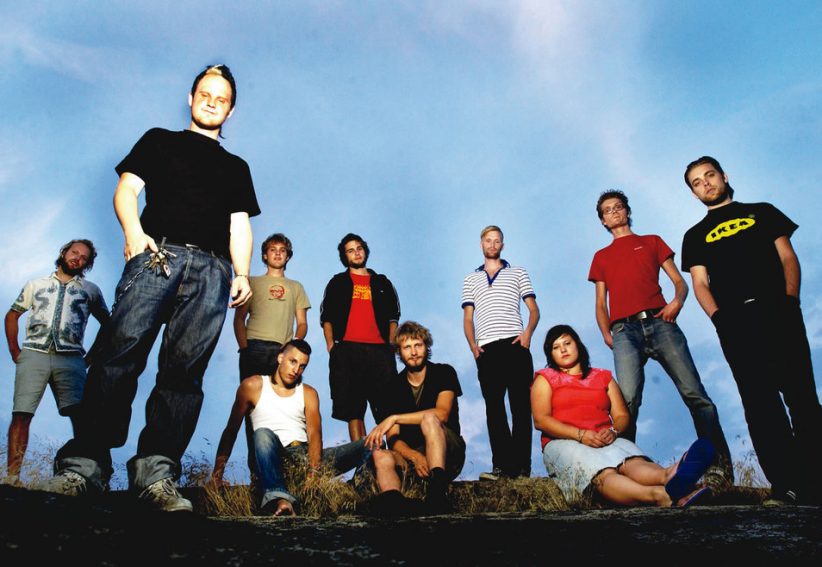 The vibe from Jaga Jazzist began in the Oslo jazz underground about five years ago and went overground with the release of A Livingroom Hush in 2001 (reissued by Ninja Tune). In 2002, the CD was voted jazz album of the year by BBC.com listeners.

But if Jaga Jazzist’s first album made audiences across Europe perk up their ears, their live performances were something else. Now the group’s much anticipated follow-up, The Stix (Ninja Tune), is out, and when it debuted at this year’s Vossa Jazz Festival in Norway, there was a queue of three and four deep that stretched five hundred yards around the block. The audience in the big Voss Idrettshall was comprised of mostly under-30-somethings who jammed themselves around the bandstand like a rock concert and responded to every solo by waving their arms in the air. Jaga’s drummer, cheerleader and frontman Martin Horntveth said afterward that this kind of response to their blistering live performances was typical across Europe.

The 10 members of Jaga Jazzist each play several different instruments, but the basic lineup comprises tuba, vibes, trumpet, saxes, bass clarinet, Stereolab-style keyboards, electronics, bass (acoustic and electric), guitar and acoustic and electronic drums. One of the most innovative bands in Scandinavian jazz, Jaga Jazzist is based in Oslo, which has become a nexus for an extraordinary synergy of musical activities that’s been bubbling away for several years and is beginning to surface across Europe. “The Oslo scene has all types of bands and all this different sounding music,” Horntveth says. “That’s how we fit in-we’re different, because everybody there is different! In our band, everybody doubles; it frees people up for new ideas, rather than just playing saxophone all night. We love the sound of two bass clarinets; we also double up other instruments. It’s not just jazz solos or jazz and electronics; we try and get a group sound of our own.”

Their convoluted, time-change, roller-coaster arrangements achieve a fascinating balance between acoustic jazz and electronica. Onstage for 90 minutes without a break or even a page of music in sight, Jaga Jazzist shapes its musical identity with unexpectedly sophisticated compositions whose relentless melodicism and avant-garde flourishes unwind in all sorts of unexpected directions. Sitting down and writing for a large ensemble is hard, often thankless work, which is why good, well-realized compositions like these are rare. It’s a discipline that rubs off on the soloists, who didn’t try and blow one another off the stand but know what to say within the context of the arrangements to make the music work. It’s a communal effort that has created Jaga’s vivid group identity.

Formed in 1994 in Tønsberg, a town outside Oslo, the band was left to incubate in the comparative isolation of a small, self-contained music scene. The nucleus of the band is Horntveth, his brother Lars (tenor sax, bass clarinet and electric guitar)-who was 14 years old when the band was formed-and their sister Line who gives the band its backbone with her powerful tuba riffs. Six of the current lineup have been with the band since the beginning, which explains how Jaga really plays from inside the music. The key is Martin’s constant and insinuating percussion presence, both live and on record, using a mixture of kit and drum machine. “I use the Akai MPC2000 live because it’s very good for live triggering and drum machine playback,” he explains. “The large pads make it easy to control the machine and play live drums at the same time. We love playing live, and everything we do is approached with that in mind. Maybe you could say we play electronic music with live instruments.” (The electronica element is apparent on the new Animal Chin EP for the punk label Gold Standard Laboratories, which features songs from A Livingroom Hush and The Stix along with a new tune and two remixes.)

Most of the arrangements are provided by Lars, whose constantly shifting tonal colors, rhythmic shifts and mood changes avoids collage through fluid juxtaposition and deft writing skills. “We start off with written arrangements then improvise with different sounds and arrangements,” Martin says. “We try and write ‘too much’ music so we can select the best parts and lose the rest. On the albums we try and get that energetic live feel and the cut-up electronics. We’re very focused on the collectivity and the fact we have a unique instrumentation. We like to combine a good melody with unusual orchestration, also weird beats and noise. I think people are open for new sounds and complex electronic music. The use of electronics is set to grow fast.”