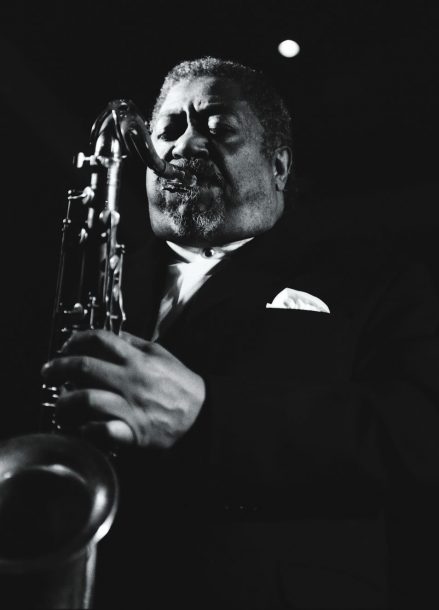 He’s played for presidents, world leaders and celebrities. He has performed on national radio and television with the likes of Solomon Burke, Stanley Turrentine and the Drifters. He’s traveled the world on diplomatic missions, sharing the stage with everyone from Ed Shaughnessy to Bob Hope.

It sounds like a life most musicians only dream of, but there’s a catch: Saxophonist Jacques Johnson did it all for Uncle Sam.

For nearly 28 years, the performer called “Saxman” served in military bands while in the U.S. Army. He was the first African-American to earn the rank of sergeant major-the highest non-commissioned officer status-in the premier United States Army Band. And he served as lead tenor saxophone and director for the U.S. Army Blues Jazz Ensemble.

Despite such accomplishments, Johnson would rather discuss Coming From the Old School, his sixth self-produced CD.

“[Last year] all of my friends started dying,” says Johnson, 66, referring to fellow Washington, D.C.-area jazz musicians Keter Betts, Mike Smith and Charlie Hampton. “I was at the last funeral, and I looked at the other [musicians] and said, ‘We’ve got to do this now.'”

Within weeks Johnson teamed with organist Bill Clark, who was an old friend from the D.C. jazz scene.

“We wanted to do it like the old days,” Johnson explains. “Go straight into the studio and just play. We said we weren’t going to practice.”

The fresh result is a spontaneous mix of jazz, soul and go-go. It was recorded in two days in the basement studio of David Earl, founder of the blues and roots label Severn.

“Back in the old days, the jazz and blues players played together,” Johnson says, explaining the gumbo of sounds on Old School. “You can dance to every track on it.”

The album kicks off with “I Can Taste Your DNA (A Kiss),” a stirring soul-jazz groove with a hook-laden head that matches anything Johnson’s heroes, Turrentine or Gene Ammons, wrote. “You Are the One” is smooth jazz at its finest, with excellent stick work from drummer Andy Hamburger. But the highlight of the album is its finale, a thumping go-go rendition of “Take the ‘A’ Train.” Johnson says he arranged “‘A’ Train” as a teaching tool for young people. “It’s a way to turn kids on to jazz,” he explains. “When I go to schools, kids turn their noses up at jazz. This song has all the changes of the original song but sounds like the music on the radio today.”

Johnson understands how important music can be to a child’s future. The Hopewell, Va., native picked up clarinet and saxophone as a child because he couldn’t play sports. “I had soft bones and was very sickly,” Johnson recalls. “My stepfather was a guitar player and he turned me on to music.”

After playing in various bands in Virginia, Johnson enlisted in the Army to support his family. He auditioned for the Army band during basic training, and the rest is history. Following stints in Europe, Johnson settled in the D.C. suburbs. He retired from the service in 1987 and embarked on a teaching and recording career. Old School came out in October, and its R&B sequel, Coming From the Old School Part II, is due out this summer. It features bluesman Chick Willis on vocals and lead guitar.

Johnson works with several D.C.-area youth jazz ensembles, including the Blues Alley Youth Orchestra and the Catholic University of America Jazz Band. “I would love to get more young black kids into jazz,” Johnson says. “There are just too many stuffy educators turning them off.”

He’s turned at least two young people on to music. His son, Jacques Jr., is a busy session guitarist and is featured prominently on Old School. And his daughter is the remarkably talented Me’shell NdegeOcello, who has earned critical acclaim (and three Grammy nominations) for her blend of R&B, pop and jazz.

Johnson beams brightest not when discussing his work for Uncle Sam but when boasting about his children’s success. “You listen to Coming From the Old School,” Johnson explains proudly. “Then you’ll see where Me’shell gets her thang.”