Skip to content
Become a member and get exclusive access to articles, live sessions and more!
Start Your Free Trial
Home > JT Archives > Jacky Terrasson at the Earshot Jazz Festival 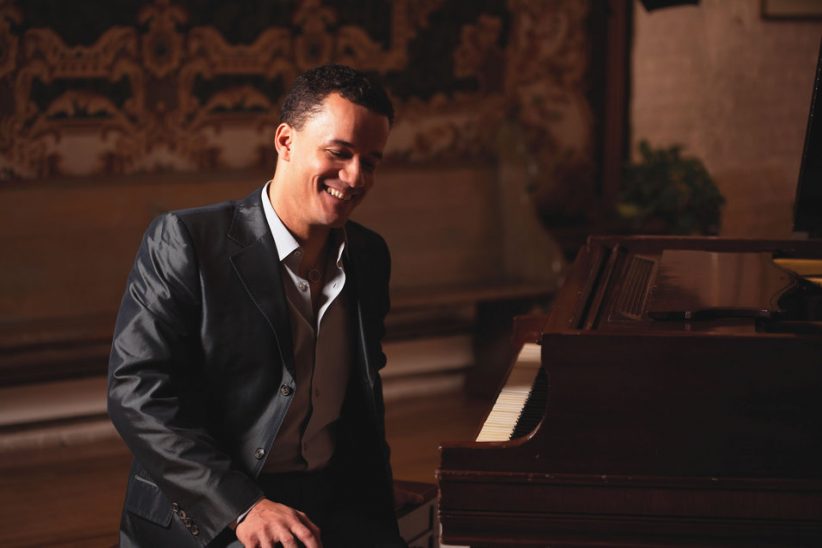 Jacky Terrasson’s appearance at the Earshot Jazz Festival confirmed an eternal verity: If you only know a jazz musician from recordings, you do not know that artist. (Keith Jarrett has said that a record is “like a fax” of a musical event.)

Even if you own all nine of his Blue Note recordings, even if you have listened hard to his new solo album, Mirror (on which his current solo show is based), you are not quite prepared for the experience of Jacky Terrasson in person.

For starters, no album gets Terrasson’s sound (not even when, like Mirror, it is recorded by one of the best engineers in the business, Joe Ferla). A Steinway played by Terrasson is a different instrument. His notes ring and hang in the air with a particular piercing metallic clang.

For another, a live Terrasson concert is a notably dramatic, dynamic occasion. In person you see how this compact man swoops over the keyboard like a condor and how he dominates the instrument.

In person Terrasson is one of the loudest pianists you’ve ever heard. On the opening number at the Triple Door he almost never got above middle C and was deafening. He cracked thunder, foregoing forward movement, churning and heaving in place, celebrating the maelstrom. But most of his pieces, even with all their digressions, have narrative flow. The second tune was an intricate, continuously evolving “You’ve Got a Friend.” The contrast with the version on Mirror was stark. On the record, the song is a hovering, rapt testament. At the Triple Door it was longer and harder and more complex, expressed in diverse languages, even including stride. “Everything Happens to Me” is a deep, affecting ballad on Mirror. At the Triple Door it was more so, with unresolved inner tension and real pain in its epiphanies.

In person, uptempo tunes contain sudden intervallic leaps and huge spikes in amplitude. Terrasson’s concept of solo piano is orchestral. “Caravan” was a processional that wildly pranced and careened. “Tragic Mulatto Blues” was a wailing, rolling ritual. It is surprising that Terrasson has infrequently performed solo and that Mirror is his first solo recording, because he is a natural. His left hand is formidable. Unlike many pianists who play solo, he does not use his left hand as a surrogate for the absent bassist and/or drummer, and often does not even use it for chords. Rather, his left hand plays its own independent song, concurrent with his right. The contrapuntal patterns effectively double the detail in the overall grand design.

And Terrasson plays all of the piano. He can knock you down when the section riffs kick in his piano orchestra. “Just a Gigolo” achieved the impossible: it out-Monked Monk. Terrasson set Monk’s version of the song in motion, sublimely jerky and full of pregnant pauses, then he exploded it. Then he settled it at the end with a quiet theme statement of a lyric gentleness that exists nowhere in Monk’s world.

Two days after his Friday appearance in Seattle, Terrasson gave a Sunday afternoon solo concert at the San Francisco Jazz Festival. The Triple Door in Seattle is an excellent place to hear music (good sound system, good food, good sight lines), but the setting in San Francisco was beyond posh. The Legion of Honor is a museum built as a three-quarter-scale adaptation of the 18th-century Palais de la Légion d’Honneur in Paris. On a brilliant sunny autumn day, the views of the Golden Gate Bridge and the city and the bay were stunning. Downstairs in the museum is the 316-seat Louis XVI-style Florence Gould Theater, with columns and ceiling murals. It was illuminating to witness how an improviser like Terrasson approaches a virtually identical program, 42 hours later. The thematic content of each song recurred, but Terrasson usually places these references in the middle distance. The background and foreground is dense with his spontaneous inventions of elaboration, and they were what changed in the two performances. “Take The ‘A’ Train” was much longer in Seattle, a series of tumultuous eruptions in which Ellington was embedded. “Autumn Leaves” was harder in San Francisco. (The leaves did not “start to fall,” they pelted.) “America the Beautiful” was more in-depth in Seattle, but both versions allowed constellations of notes to suddenly become the song in flashes.

Mirror is a pale and mild approximation of the real thing. On the other hand, you can take it home with you.