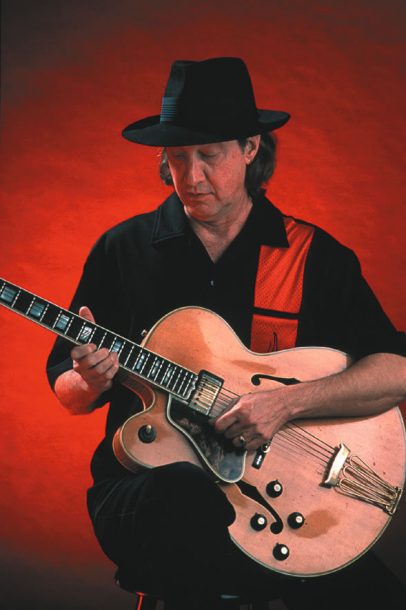 Guitar great Herb Ellis and I were flying in from Houston, Texas to San Antonio to join Lenny Breau in a three-part guitar clinic at the Southwest Guitar Conservatory (the full-time guitar school that I owned for seven years in the late ’70s and early ’80s). We were going to be late due to weather conditions that had us in a holding pattern around San Antonio. After about an hour the pilot announced, “We only have two-and-a-half minutes of fuel left-then we will have to go to Dallas.” Herb leaned in to me and said, “I wish he hadn’t said two-and-a-half minutes. That half minute bothers me.”

This was the first time the three of us were to play together after doing our parts of the clinic individually. Herb had never met Lenny and was not familiar with his playing. After a while I said to Herb that Lenny would go on first and cover for us until we got there. He turned to me and said, “Lenny’s pretty good isn’t he?” I replied, “Yeah, he’s real good.” Herb thought for a minute and then said, “When we get there, let’s go up together because he can’t be better than both of us.”

We finally arrived late and Lenny, after fielding three hours of questions ranging from “What kind of pick do you use?” to “What’s a chromatic whole tone scale?” was ready to hit the bar across the street. He’d braved the extended Q&A session solo while we circled above.

After the seminar, Herb and I had a gig that night at a local club called Nona’s. During the first part of the gig the crowd was really noisy. After the second song Herb jumps up and in a loud voice said, “May I have your attention for a minute? We don’t have any mics up here so it’s kinda hard to hear us, or for us to talk, but what we’re trying to say is-SHUT UP!” Everybody laughed and had a good time and it was another hot set. As I came off stage one guy who had been sitting up front said, “You guys are pretty good. What’s the name of your band?”

We packed up and then collected Lenny and proceeded to historic Mi Tierra, the classic original Mexican restaurant in San Antonio. This place is a Texas landmark and has existed as long as anyone can remember. It has authentic mariachis who have played around there for many years and Christmas lights and decorations that stay up all year long. We always like to go there to hear them play and the food is great. It was a busy night and the joint was jumpin’. In the process of ordering-which took a great deal of focusing on the menu-I noticed out of the corner of my eye that the mariachis were approaching our table and they were already into the bridge of a swinging Mexican conjunta-polka. I was just getting ready to suggest to Lenny and Herb that we should ask the group to come back after we ordered when I realized that Lenny wasn’t in his seat. When I looked up, I noticed that one of them, wearing a sombrero and strumming a guitar, looked strangely familiar. “Look, it’s Lenny!” gasped Herb. Sure enough there he was, smiling from the midst of the mariachis-and cookin’, I might add.