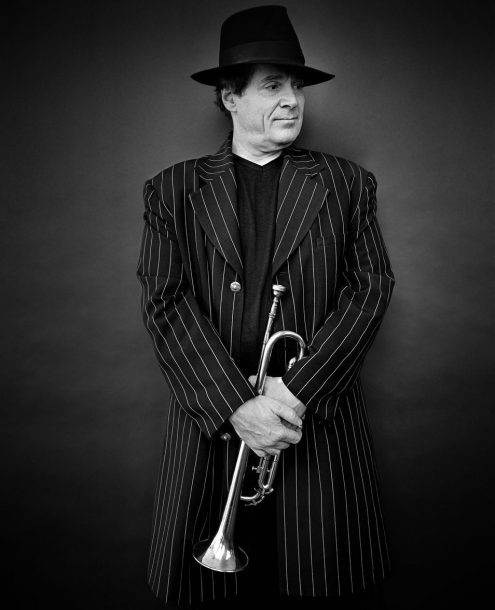 On one of his countless irreverent recordings, noted auteur and irascible iconoclast Frank Zappa once posed the question, “Does humor belong in music?” On Invasion of the Booty Shakers (Savant), the latest with his band of musical upstarts collectively known as Masters of Suspense, trumpeter Jack Walrath asks the question, “Does insolence belong in music?” And with cuts like “Rats and Moles,” “Da Thrill of Vasectomy, Da Agony of Da Feet” and “I Want to Be Your Pig,” his answer would seem to be a resounding yes.

Blending metalesque skronking from guitarist Bill Bickford (a charter member of Defunkt), wild vocal abandon from audacious scatmaster Miles Griffith, slamming yet intricate grooves from drummer Cecil Brooks III and bassist Hill Green and bristling, daring trumpet work from Walrath, the Masters of Suspense run the stylistic gamut from punk-funk to bebop, from roadhouse blues to reggae to samba, all done with a touch of merry prankster glee. Several of Walrath’s tunes on the new recording have an ironic sense of juxtaposition, a surprising Jekyll-Hyde dichotomy that defies standard songwriting forms. It’s a characteristic he may have inherited from a former employer and significant mentor, Charles Mingus.

A native of Florida who was raised in Montana before relocating to New York in 1973, Walrath served as the trumpeter in Mingus’ final bands (alongside drummer Dannie Richmond, tenor saxophonist George Adams and pianist Don Pullen) from 1974 until 1978 when the great bassist-composer, incapacitated by Lou Gehrig’s disease, could no longer work. On Walrath’s last string of recordings with the Masters of Suspense (including 1994’s Serious Hang on Muse and 1995’s Hipgnosis on TCB) he has continued to pay tribute to Mingus by playing his music, albeit in radically altered arrangements. This time out it’s Mingus’ “Freedom,” which receives an edgy punk-funk reading featuring Bickford’s caustic, distorto-guitar work, Griffith’s sanctified recitation delivered with evangelical zeal, a haunting vocal choir, Art Baron’s didgeridoo and Walrath’s impudent trumpet dancing cathartically over the fray.

Call it an inherent subversive streak or just a bit of tongue-in-cheek, this kind of irreverent approach has been Walrath’s calling card since he set out as a leader in his own right in 1979 with Demons in Pursuit (Gatemouth). “I didn’t know it was subversive,” he laughs. “Humor has always been an important part of jazz. Jazz is not only art, it’s also show business. Remember watching Leonard Bernstein conducting? That was part show business, too. But things seem so serious now-not just in jazz but in society in general. But in jazz, so many of the young musicians I see are basically up there on the bandstand just reading a part and thinking about playing the right notes as opposed to really getting into the music. And so that makes for a climate of seriousness that I really don’t relate to. Hopefully it’ll evolve back into a thing where jazz artists won’t take themselves so seriously and will be able to have some fun with the music again.”

While Walrath confesses that, gig-wise, jazz is in rough shape nowadays, he plans to plug away at his own eclectic musical vision, just as Zappa and Mingus did before him. “Recently, a guy offered me a gig to play with this kind of rock band, promising 32 weeks a year of good-paying gigs. And I thought, ‘Why have I been paying dues all these years if I’m going to get on stage and toot a riff every once in a while standing behind the rhythm section?’ I mean, that’s something I did when I was 20. I spent my life trying to play this music, so I’m not going to stop now. They’re going to have to take me out kicking and screaming.”

Meanwhile, Walrath sees new hope for working jazz musicians in the burgeoning, youth-oriented jam-band scene. “I think there’s an audience there that is open to something,” says the 56-year-old trumpeter. “You can’t go there and play ‘How High the Moon’ with a piano trio, but I think they can relate to energy. I think if Coltrane was up there just doing his thing, they’d dig it. Nowadays I like to use funk and rock elements in my music and I think these same people would relate to the energy of it and appreciate where I’m coming from. Maybe I’m Utopian-naive but I think if a young audience would hear really good musicians playing that kind of music, what are they going to do, walk out? People are intuitive. If you give them the truth, they’ll feel it. I think people can tell when musicians are bullshitting.

“We’re in a funny period,” he continues. “People are afraid of their own shadows nowadays and they’re always taking everything safe. It seems that ever since 9/11 everybody’s so politically correct and afraid to say anything. But you gotta fight back. You can’t just cower in your room and let people do things to you. And I like to think that I’m fighting back with my music.”