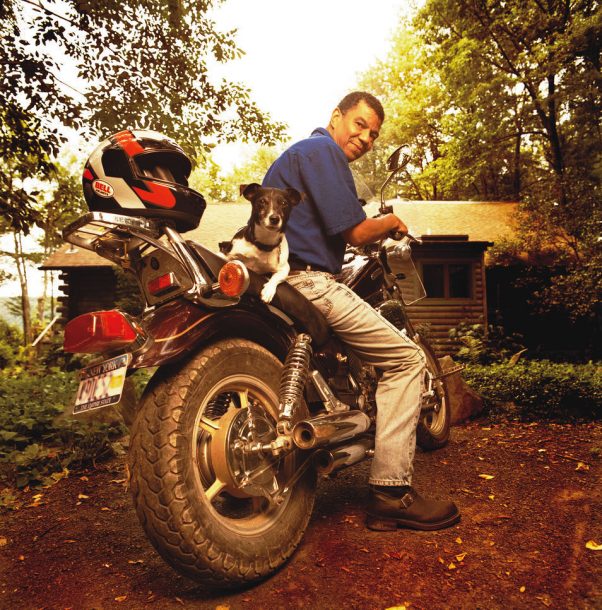 High up in the Catskills, away from the downtown area of Woodstock, N.Y., where antiques and artisans entice tourists and locals on Tinker St., you can find Jack DeJohnette.

You might find him and his wife, Lydia, in the living room of their log-house home that they built in 1975, when they moved to Woodstock from New York City. Or you might find DeJohnette down in his increasingly sophisticated music studio, or maybe just relaxing on the deck and admiring the expansive mountain view.

Or if you hit the winding roads that weave through the Catskills, you might find the legendary drummer-composer zipping along on one of his two motorcycles: a 1986 Yamaha Virago 700cc (pictured in the photo; that’s DeJohnette’s dog, Magic, riding shotgun) and a 1981 Yamaha Virago 750cc.

“I love riding my motorcycle on nice warm days,” DeJohnette says. “Lydia goes with me sometimes; she rides on the back. The traffic up here is much slower than it is in the city, so I just cruise around up in the country roads. It’s very meditative. I really love that.”

DeJohnette started riding motorcycles after his wife bought him a 200cc motorcycle for his birthday, much to his surprise. “After a few spills on it, I got the hang of it and started moving up to bigger motorcycles,” he says. “I’ve been doing it ever since.” No dirt bikes or off-roading for DeJohnette, however. “I’m just a cruiser,” he laughs.

Another DeJohnette passion is the music studio in his basement. “I just set up my studio with a Roland 2480 24-track hard-disk recorder and some Roland 24-bit speakers and some Shure microphones. You can record, mix and master right on it. I have a nice setup there”-and the same could be said of the rest of DeJohnette’s home.

Building a new house instead of buying an existing one was appealing to DeJohnette because “it would have our vibration in it.” He and Lydia worked with the architects to design the log house, and naturally, DeJohnette says, “The theme of the house is wood. Wood paneling, wood floors. It’s just the warmth of the wood.”

In 1969 Joni Mitchell wrote of Woodstock, “I have come here to lose the smog/I feel just like a cog/In something turning,” and you could say the Chicago-raised DeJohnette did the same. He and Lydia, a visual artist, liked that Woodstock was an artists’ colony, and they decided to move there to raise their now-grown children: Farah, 32, and Minya, 28. “We like the country. We haven’t regretted it. There’s a lot of art, music, dance, theater and we’re going into the third year of the Woodstock Film Festival, which is gaining momentum.” Since moving to Woodstock, DeJohnette, whose Native American lineage includes Seminole and Crow, got involved with the Seneca tribe in upstate New York. “We were initiated, the whole family, in the Wolf clan so we all have Wolf clan names,” he says.

The DeJohnettes own four acres, some of which are landscaped. There are neighbors on either side of the house, but the DeJohnettes never see them, and the home’s peaceful isolation and rustic interior makes the place feel like a meditative retreat. “It gives us a place of comfort and relaxation,” he says.

To paraphrase Mitchell’s “Woodstock,” it looks like DeJohnette got himself back to the garden.

Computer? “I have an iBook. I don’t like to sit in front of the computer all the time.”

Vacations? “One of our favorite places is Italy. We had a vacation in Tuscany, which was really nice. I like Sedona, Arizona. I’d like to go back there at some point.”

Books? “I’m reading A Beautiful Mind at the moment.”

Movies? “I’d like to see Sunshine State. I like a lot of his movies, John Sayles. I saw John Q, and I liked that. A Beautiful Mind.

Food? “Lydia’s the cook, but I have a few dishes I like to cook, like mushroom risotto-that’s my favorite dish-turkey, turkey breast. I love spinach. Roast chicken, roast potatoes, mashed potatoes. I love Indian food.”