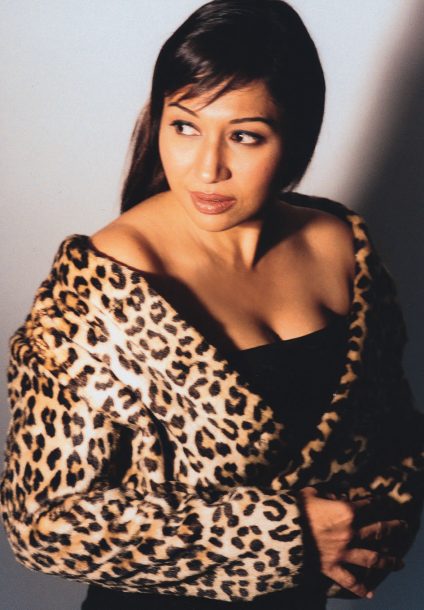 Musically speaking, Jacintha Abisheganaden has been all over the map. A fairly recent jazz convert, the Singapore-born chanteuse started out as a techno-pop diva, moved to the U.S. where she formed her own band, recorded an album of Spanish standards, returned to Southeast Asia, crafted a best-selling compilation of soft-rock classics, shifted to experimental stage work, performed with the New York Philharmonic and enjoyed a long run as Grizabella in the Singapore production of Cats. Not bad for someone who, based on the cover of her latest ballad collection, Lush Life, looks to be about 24. “Album covers are pretty deceiving,” she giggles, admitting that she’s a full two decades older than my guesstimate.

Simple mathematics suggest, then, that Jacintha (she long ago abandoned that tongue-twister of a last name) was 40 when she decided to forego safer career paths to test the jazz waters. Signing with Ying Tan’s Groove Note label, she partnered in 1999 with tenor sax legend Teddy Edwards to create Here’s to Ben, a 10-track melange of songs associated with Ben Webster. “My goal,” she says, “was to strip away everything I’d done previously and [focus] solely on the songs themselves. I wanted to take a storytelling approach, acting as narrator for the album and mapping out an emotional plan as I wove the songs together.”

A second salute, this time to Johnny Mercer, followed in 2000. It again featured Edwards and provided another ideal, ballad-driven showcase for her warm, delicate voice that, injected with a hint of Julie London somnambulism, is as inviting as it is gentle.

Asked how, after back-to-back tribute albums, Lush Life took shape, Jacintha explains, “Ying usually leads me in song selection. We started with ‘Lush Life’ and then paired it with ‘Harlem Nocturne.’ They became the cornerstone, and the rest were chosen to inform those two.” If the string-infused album has a role model it is, she suggests, Point of No Return, Sinatra’s classic 1962 nod to romantic disillusionment. “Sinatra didn’t hold back. He painted with such bold colors. At one point I asked, ‘Where’s the obligatory up-tempo number?’ and when Ying said there wasn’t one, I thought, ‘Yeah! That’s great.'”

Grateful to be able to establish an international jazz profile while remaining in Singapore, Jacintha has no plans to tour outside Asia. Placing motherhood ahead of stardom, she prefers to stick close to home until her three-year-old son, Alexander, is old enough to handle life on the road. She is, however, keeping busy in the studio. She recently traveled to Chicago to record four vocals for her pal Jeremy Monteiro’s jazz homage to the Carpenters, and begins shaping her fourth Groove Note album in October.