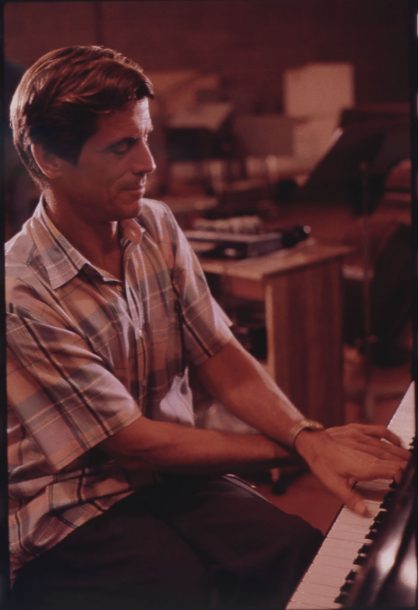 In 1957, a 21-year-old Hod O’Brien replaced pianist Bill Evans in Oscar Pettiford’s band. Evans had been performing “strange things” on the keyboard, so the bassist welcomed the orthodox bop sound of O’Brien. It was the pianist’s first big break. It was also the last time he would be replacing Bill Evans.

Evans, of course, would go on to change the way pianists played jazz. In his quiet, halting career, O’Brien stuck with the sound that got him in the Pettiford band so many years ago. “Bebop has always been in my gut,” O’Brien says, now 69. “I flirted with some other things, but I always came back to bebop.”

These days O’Brien lives in Central Virginia with his wife, singer Stephanie Nakasian, and daughter. His house sits on top of a hill dotted with cows and dogs. From this unlikely base of operations, he’s been slowly building his career.

O’Brien grew up in the northwest corner of Connecticut with another future jazz player, trombonist Roswell Rudd. In his teenage years, O’Brien played stride and Dixieland, often in the company of Rudd and the trombonist’s father. When a friend turned the pianist on to Jazz at the Philharmonic recordings and Symphony Sid’s late night radio broadcasts, O’Brien made his conversion to bebop.

Though he didn’t realize it at the time, O’Brien gravitated toward the players who had internalized the Bud Powell style, even though he at first found Powell’s own music off-putting. “Bud was beyond my grasp,” he says. “I was coming out of Nat Cole and Billy Taylor. Bud was playing a little too harsh, a little too virtuosic. Later on, I got to hear people like Tommy Flanagan, Claude Williamson. Their playing codified Bud’s playing for me. I could pick it out better. I thought, ‘Oh, that’s what Bud’s doing.’ Then I knew how to copy it.”

College lasted just three months for O’Brien, who subsequently jumped into the late ’50s East Coast jazz scene, where he grabbed gigs with Pettiford, Teddy Kotick, Zoot Sims and Stan Getz. But with the voice of his practical father in the back of his head, O’Brien left jazz for several years beginning in the late ’60s. He studied at New York University and took a job as a research assistant, which lasted, as he put it, “until the grants ran out.” A few years later, O’Brien got back into jazz for good, and even opened a club, St. James Infirmary, with Rudd. Though the club lasted only a year (the pianist was more interested in the music than the finances), O’Brien stayed in New York, gigging until the early ’80s.

O’Brien hasn’t built much of a discography-especially from the beginning of his career through the early ’80s-but he certainly has a knack for turning up on notable recordings. Generations of guitarists know O’Brien from Rene Thomas’ classic 1960 recording Guitar Groove (OJC). The pianist appeared on one of Chet Baker’s superlative late-period recordings, Blues for a Reason (Criss Cross), after playing behind Baker for years in New York clubs. And O’Brien’s first big recording session turned out to be a minor classic. The young pianist tried to impress Teddy Charles in a jam session one night without realizing that Charles was moonlighting as an A&R man for Prestige. “After we finished playing, Teddy says, ‘Hey man, I like the way you play. Want to do a record date?” O’Brien laughs. “I got to be on the Three Trumpets record with Art Farmer, Idrees Sulieman and Donald Byrd [later repackaged as Art Farmer’s Trumpets All Out (OJC)]. When I meet these young trumpet players, they all know who I am. When I met Woody Shaw, he said, ‘Yeah, man I know who you are-I know that record. And Nicholas Payton knew me because of that record, too.”

O’Brien has been enjoying a modest, late-career bloom, especially in Japan, where his pure bebop approach, untouched by Evans or McCoy Tyner, attracts highly appreciative crowds. His latest album, and ninth as a leader, Live at Blues Alley-First Set (Reservoir), finds the pianist shooting out long, declarative bop lines in the company of his favorite sidemen, bassist Ray Drummond and drummer Kenny Washington, whom he first met at a Criss Cross recording date and hires whenever possible. “I particularly like Kenny Washington,” he says, waiting a beat before saying, “And I particularly like Ray Drummond. I love the way they lock in together. Kenny’s so clear and crisp and Ray has a nice strong attack and a deep warm sound. There’s a lot of forward thrust to the rhythm section. That’s the way I like to feel it.”