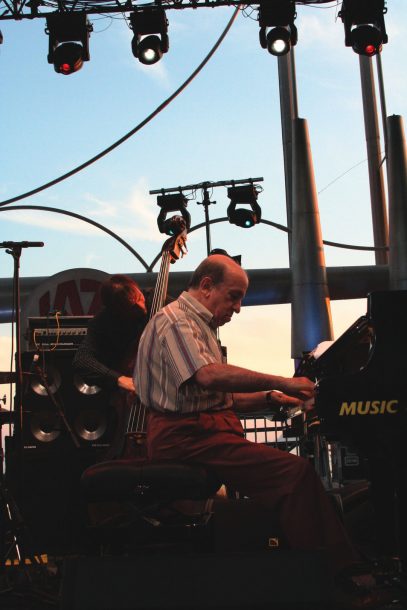 Every concert, everywhere, should be staged in front of the sea as the sun sets. Because when you listen to music while looking at water-with sailboats and yachts floating by, a full moon hovering in a cherry-painted sky, cicadas buzzing along in a sympathetic drone-everything seems golden. Even Keith Jarrett’s madman grunting can almost sound soothing in duet with the French Mediterranean.

Air France flight to the country, accompanied by the sounds of Mingus at Antibes and a bottle (or two) of Bordeaux. I arrived at the 2006 Jazz à Juan festival five days after it started to find…Tracy Chapman headlining. Not exactly Miles Davis or Duke Ellington, but what are you going to do? Jazz festivals are music festivals now, and I don’t mind at all. But the subdued singer-songwriter couldn’t rouse my jetlagged eyes, and I found my mind drifting as the crowd clapped and sang along to the painfully shy Chapman, who insisted on very little lighting. The darkened dais may not have pleased fans eager to see Chapman, but the shrouded stage did highlight the glorious glowing backdrop: la mer over her right shoulder, the coastline to Cannes over her left.

But you need not look far to find a pure jazz fix in Juan, an animated resort town that caters to everyone from the rich and famous to the middle class and anonymous. From Sidney Bechet Square, which features an eerie bust of the clarinetist, to the 50-plus sidewalk tiles that feature handprints and signatures from the legends who played there, jazz is everywhere in Juan. Along with numerous nightclubs spinning dance music, the “Jazz Off” portion of Jazz à Juan keeps the town swinging in a way that even Jazz Age Juan-Les-Pins resident F. Scott Fitzgerald might still recognize as the “constant carnival.”

Organized by Martinique-born, Antibes-based bassist Eddy Gaulein-Stef, Jazz Off is now incorporated into Jazz à Juan, offering daily free or low-priced concerts throughout the town in various venues, including an outdoor stage in the Jardins de la Pinède, which was directly across from my room at Le Meridian Garden Beach hotel. Most shows were by top-notch French artists who were unfamiliar to me, such as pianist Mario Stantchev (who emigrated from Bulgaria), but recognizable names like guitarists Philip Catherine and Philippe Petrucciani (Michel’s brother) also performed. I loved having all the music filtering into my hotel room-so much so that I opened the window and let the air conditioning run free in order to better hear the outdoor concerts at podium petite Pinède.

Le Meridian also hosted the nightly jam session by saxophonist Jean-Michel Proust, and many of the Jazz à Juan headliners showed up to play a song or two, including Jamie Cullum. The loveable imp played piano and belted “Bye Bye Blackbird” there a few hours after he whipped up the audience with a fantastically showy concert on the main stage.

Another face frequenting the jam session was French alto saxophonist Géraldine Laurent, leader of the Time Out Trio, which participated in the “Jazz à Juan Révélations 2006” concert along with groups lead by vocalist Emi Oshima and guitarist Nicholas Meier, fellow winners of a April 2006 contest sponsored by the festival. Ticket sales for this night were a country mile short of sold out, but it was commendable that Jazz à Juan gave such a high-profile opportunity to these trés talented younger artists.

Martial Solal is another supremely talented musician (though not so young), who didn’t come close to selling out his Jazz à Juan concert. But this is a large venue, and there were still a couple thousand people who witnessed France’s most prestigious pianist. Solal turns 80 in January 2007, but his facility on the keyboard is as fluid as ever. Backed by the Moutin brothers-François (bass) and Louis (drums)-Solal performed seven striking songs, all marked by his mind-bending ability to reharmonize familiar tunes, such as “Tea for Two,” to the point where they’re almost unrecognizable.

Solal is practically unknown outside of continental Europe, but he’s on the artistic level of Thelonious Monk, Art Tatum and Bud Powell. It was somewhat strange to hear such rigorously intellectual music played against the backdrop of an idyllic beach setting (and the glorious mindless bliss it engenders), but it was copacetic nonetheless. (The Wayne Shorter Quartet followed, so the night was one long blast of erudite jazz.)

The festival’s closing (and sold out) concert was by Jazz à Juan favorites Keith Jarrett, Gary Peacock and Jack DeJohnette. After a long, stern announcement reminding us plebes that no cameras were allowed, I felt tense. I even wondered how Jarrett would deal with the screaming cicada chorus that surrounded us. Perhaps he’d stop the concert and tell the insects to shut their frickin’ tymbals, the organs with which the males produce that distinctive alien whine?

The audience seemed to feel uptight, too, perhaps because many of them had witnessed Jarrett’s temper tantrum at a previous Juan-Les-Pins performance, when somebody snapped a photo and the notoriously prickly pianist left the stage in a huff, never to return. But this night nobody whipped out a digi-cam, and Jarrett and Co. played their usual genius set, filled with the leader’s legendary lyricism-and the predictable and completely annoying groaning. In addition to a set-opening “Life Is a Bowl of Cherries” and encore closing “Poinciana,” Jarrett’s trio went way back and tackled “Basin Street Blues.”

But as Jarrett played Harold Arlen’s “Last Night When We Were Young,” even his painful moaning couldn’t distract me from thinking of the lyrics, “Where is that star that shone so bright / Ages ago last night?” as I stared at the winding coast, the placid sea and the sparkling pin-pricked sky from the same vantage point that captivated Fitzgerald 80 years prior.