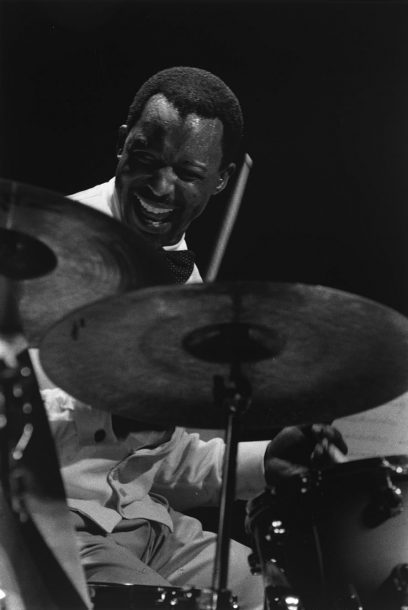 In New Orleans, music is a family affair, a cherished tradition passed from generation to generation. Drummer Herlin Riley comes from one such musical family. “I learned to play when I was 3 or 4 years old,” he says. “I was primarily raised by my grandfather who was also a drummer.”

Riley’s grandfather, Frank Lastie, was a respected New Orleans musician who as a child spent time in a home for juvenile delinquents, where he played in a band with Louis Armstrong in 1913. Frank Lastie’s sons were also musicians, including Walter, a drummer who introduced his nephew, Herlin, to bebop.

The 42-year-old drummer, who recently released his first recording as a leader, Watch What You’re Doing (Criss Cross), is best known for his work with the Lincoln Center Jazz Orchestra. Before joining the LCJO in 1992, Riley played with pianist Ahmad Jamal from 1982 to 1987. In 1988, he became a member of the Wynton Marsalis Quintet, occupying the drum chair vacated by Jeff “Tain” Watts.

On Watch What You’re Doing, Riley showcases his knack for conjuring up danceable grooves, aided by fellow LCJO members trombonist Wycliffe Gordon, multireedist Victor Goines and bassist Rodney Whitaker. The disc opens with the title cut, which in part features Riley’s take on the Smokey Johnson tune “It Ain’t My Fault,” a staple of New Orleans brass bands. “In the opening tune, I wanted to identify who I was,” explains Riley. “I’m a New Orleanian-and you can hear it in my playing.” Other songs include a beautiful, lilting ballad penned by Whitaker entitled “John Lewis” and “Warm All Over,” a Latin-tinged composition that features a brilliant solo by pianist Farid Barron.

The disc closes with the burner “Blood Groove,” based on a seemingly effortless groove Riley first conceived for the Marsalis oratorio “Blood on the Fields.” Here, Riley reminds the listener why he is one of the most respected drummers of his generation. “I wanted to do a record with my own name, to document my playing,” he admits. “I’ve been working on this music for a while now and it was important for me to make a recording as a leader.”