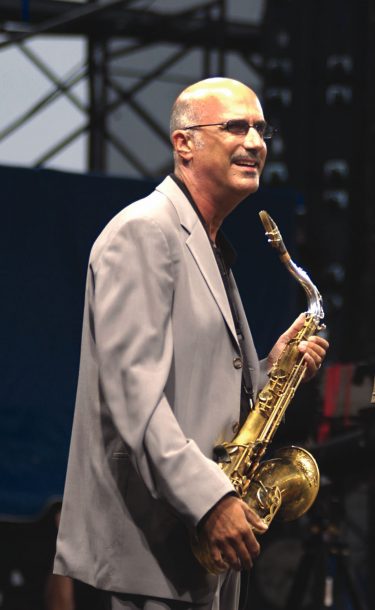 Michael Brecker at the Newport Jazz Festival in 2004

One of the more anticipated events in this year’s JVC Jazz Festival-New York lineup, this Carnegie Hall gala presented the iconic and multi-directional Herbie Hancock (pictured) in four distinct settings that showcased his technical brilliance along with his uncanny open-mindedness and unrelenting creativity.

The concert opened with a regal trio of Hancock on piano, Ron Carter on bass and Jack DeJohnette on drums performing tunes from Hancock’s classic Blue Note period. After a highly interactive rendition of “Toys” (from 1968’s Speak Like A Child) and a radical reworking of the jazz standard “I Thought About You,” which featured an especially lyrical bass solo from Carter, Hancock took the mic to announce the third tune, “One Finger Snap” (from his 1964 classic Blue Note album, Empyrean Isles). “I feel kind of funny doing this tune as a trio because usually I play it with a quartet,” he announced to the capacity crowd before coyly looking into the wings and adding, “There must be some sax player backstage there who could sit in on this one.” And with that, out walked Michael Brecker with tenor sax in hand, to the utter shock of everyone in attendance. The capacity crowd leapt to its feet with unanimous cheers as Brecker backed his way onto the stage from the wings, looking up at the ceiling and turning about in a mock-disoriented, Chaplinesque manner, as if to ask, “Where am I? How did I get here?”

In Oct. 2004, Brecker was diagnosed with myelodysplastic syndrome (MDS), a deadly bone marrow disease. He continued working and toured with Hancock in March 2005, after which he was hospitalized. And while reports had been circulating that he was feeling stronger lately, entertaining visitors at his home and woodshedding again on his EWI and tenor sax, no one-except for Brecker’s inner circle of friends and family-suspected that he was well enough to make a public appearance, let alone a high-profile one at such a prestigious venue. Some in the audience wept openly upon seeing the saxophonist stroll out onto the Carnegie stage, and I confess that I, too, had tears welling up in my eyes as he put his tenor to his mouth and proceeded to play his ass off. He looked thinner than usual and walked in a very tentative fashion, but his playing on Hancock’s “One Finger Snap” was imbued with the kind intensity, unparalleled facility and soulfulness that has marked his playing for 30 years. When the tune ended, the crowd erupted into another standing ovation as Hancock and Brecker shared a big hug. Brecker’s heroic return to the scene, albeit brief, was easily the emotional highpoint of this evening.

Hancock followed that triumphant segment with a new electric quintet featuring West African guitarist Lionel Loueke, bassist Matt Garrison, drummer Richie Barshay and violinist Lili Haydn. With Hancock alternating between acoustic piano and digital synthesizers, the band worked its way through dense, groove-oriented fare like “Sonrisa” (a reworking of a tune that Hancock played with Wayne Shorter on 1997’s duo encounter 1+1) and the world music-flavored “Virgin Forest,” which Loueke sang in his native language. Violinist Haydn premiered her pop-influenced opus “Unfolding Grace,” on which she also sang some New Agey lyrics in a breathy, dramatic voice. Special guest Marcus Miller joined the ensemble for a rousing finale of the 1973 Headhunters anthem “Chameleon,” a tune which is probably older than at least a few of the musicians onstage that evening. With Miller and Garrison splitting bass duties and providing a contrapuntal low-end, Hancock wailed with abandon on a portable Korg keyboard slung around his shoulder. Miller added some signature slap bass theatrics, played at an audaciously loud level in a room normally reserved for symphony orchestras. Loueke also experimented on this tune and throughout the set with some wah-wah and whammy bar effects issued forth from his nylon string guitar.

After an intermission, Hancock joined Cuban sensation Gonzalo Rubalcaba for some dazzling piano duets on “Maiden Voyage” and Wayne Shorter’s classic “Footprints.” The pair had an immediate chemistry at the keyboards and extrapolated freely and intuitively on these themes without dropping a beat. Rubalcaba’s playing on the very Latin-tinged rendition of “Footprints” was particularly dazzling as Hancock comped steadily behind the Cuban’s blazing right-hand flourishes. At the peak of his solo, Gonzalo’s keyboard attack was so exacting and intense that his fingers were like ten little hammers on the ivories.

The fourth segment of Herbie’s World reunited the pianist with his longtime colleague and former bandmate in the classic Miles Davis quintet of the mid-1960s, saxophonist Wayne Shorter. With Dave Holland’s unerring time and pristine intonation on bass and drummer Brian Blade stirring up polyrhythmic whirlwinds behind the kit, they delved into Holland’s “Pathways” and Shorter’s ambitious “V (The Visitor)” like abstract painters throwing sound on a canvas. Shorter alternated between tenor and soprano saxes and his playing was particularly inspiring on the closing number, his own harmonically involved “Prometheus Unbound.” Blade, a remarkable drummer who colors the music with keen, daring instinct while keeping the momentum surging forward, demonstrated a near-telepathic hookup with Shorter throughout the brief set. While a previous encounter at Carnegie Hall with this same all-star ensemble was open-ended and meandering, the quartet was far more focused this time and left plenty of room for group interplay and improvisation. Sounds like it’s time to get this amazing group in the studio.