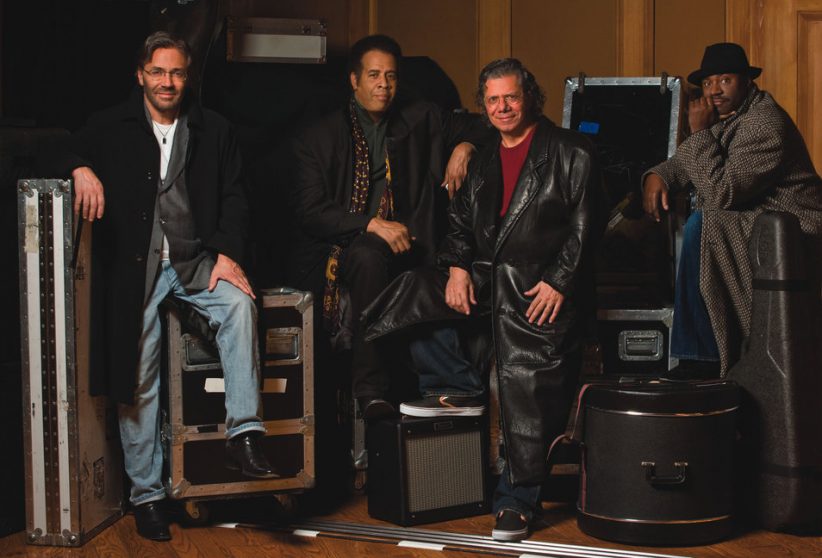 Preeminent vocalists Dianne Reeves and Diana Krall were featured nearly in succession on the same night (albeit in different venues), a deft move on the part of the programmers that allowed for examination of two contrasting but effective vocal-jazz schools.

To be sure, Reeves is one of jazz’s must-experience live shows. Often as stunning as her songs are the between-song banter and band introductions, which she unfurls as gorgeous bits of melody. At San Sebastian her set included a healthy cross-section of career achievements, among them R&B and pop tunes off the very fine When You Know as well as her Grammy-winning standards work from the film Good Night, and Good Luck. Surprisingly, what most revealed her talents was a cover of the Temptations hit “Just My Imagination (Running Away With Me).” Where a lesser singer with Reeves’ athletic vocal instrument might have overdressed such a tune with melisma and vibrato, Reeves’ vocal was controlled and crystalline. (Her range too is famously expansive, though she knows precisely when to exploit it and when to rein it in.) Her equally self-aware accompaniment-guitarist Peter Sprague, pianist Peter Martin, bassist James Genus and drummer Kendrick Scott-was so refined as to remind Reeves diehards of the large chunk of her discography marred by studio excesses. (Reeves also thrilled as a surprise guest with Bobby McFerrin, who “conducted” San Sebastian’s Orfeón Donostiarra choir but mostly cracked them up.)

In the Kursaal’s larger room, Diana Krall exercised a disparate brand of cool-a swinging, finger-snapping model that goes easy on the ears (and emotions). Krall’s Nat Cole-derived demeanor, plain but firm contralto, and habit of recording with august large ensembles make it difficult for her quartet show to transcend her recordings, and that quandary applied to this set-even if some traded choruses featuring the deeply underrated guitarist Anthony Wilson heated things up considerably. Her pop-jazz hybrid is austere and presented in a manner that is undeniably professional, balancing various musical attitudes of accommodation: Say, the exemplar swing of “Deed I Do” and the singer-songwriter lament of Joni Mitchell’s “A Case of You,” both ably performed here. Everything about the set seemed so professional and calculated, in fact, that it sometimes treaded dangerously on theatrical terrain.

Anthony Braxton performed his “Accelerator Class Ghost Trance Music” with a septet featuring several of the avant-gardist’s Wesleyan University disciples, plus brass player Taylor Ho Bynum, who has developed into one of jazz’s boldest brass experimentalists. The music-twitchy, spiny improvisations that often imply form without ever really taking it-took a backseat to some visual delights, onstage and off. A healthy audience occupied the Kursaal’s smaller auditorium at the set’s beginning, and after the leader began the proceedings by overturning an hourglass, a steadily trickling procession exited throughout. No matter: With Braxton, you’re either in or you’re out, and plenty were in, focusing rapt attention on parts composed (straight eighth notes sometimes suggested rhythm, and harmonies often seemed cyclical), and improvised, climaxing in a nightmarish cacophony as repugnant as it was exhilarating. Not to the extent of Adam Rudolph, Braxton’s leadership leans on visual cues and physical impulses, even if the controlled chaos that is his music is contained on hefty stacks of sheet music. Changes in instrumentation also seemed constant, with only tuba player Jay Rozen and guitarist Mary Halvorson assigned to a single instrument.

Historically, Braxton can now be considered Halvorson’s graduate school, the Art Blakey-style institution that nurtured one of the most exciting new voices in improvisational music and jazz guitar (certainly the most important avant-gardist to don an archtop since Derek Bailey). At San Sebastian, all of the elements were in place that would make Halvorson’s leader debut a massive (for jazz, anyway) critical hit in the coming months: jarringly beautiful arpeggiated passages, zigzagging linear phrases and snarling, Sonny Sharrock-ish bursts of fuzz-toned energy. On violin and viola was Jessica Pavone, with whom Halvorson shares an avant-folk partnership. One of her normal triomates back in New York, the drummer Ches Smith, was also at the festival, performing as part of Marc Ribot’s Ceramic Dog.

Ceramic Dog served as a reminder that perhaps the most avant-garde thing about guitarist Ribot is his versatility (and his anti-commerce comportment: case in point, he sent his rhythm section to field questions at his artist press conference). This trio with drummer Smith and multi-instrumentalist Shahzad Ismaily is a song-driven group that explores pop and rock styles through a downtown prism. Certain things, like Smith’s Sunny Murray-styled rounds of arrhythmic drumming or the unison riffs of “Never Better” evoked jazz interplay, but there was no denying the sheer pop-savvy of the warped Latin ditty “For Malena” or one of the madcap groove tunes.

Ceramic Dog was one of a handful of groups at the festival who represented the New York experimental and downtown scene in spades: There was also the large group led by Steve Coleman, who is still acting as an incubator for young talent via M-Base, and the Defunkt Millenium Project, an exceedingly fun call to arms from the heyday of postmodern funk and R&B. What always separated Defunkt ringleader Joseph Bowie from someone like his onetime boss James Chance is chops. With Joseph Bowie on trombone and percussion, brother Byron Bowie on tenor sax and the Ron Carter-schooled Kim Clarke on electric bass, this was a group of bona fide musicians out for blood-no no-wave irony was necessary to appreciate it. Even as Byron Bowie and keyboardist Adam Klipple unfolded marathon solos, it was difficult not to focus on the leader. Everything about Joseph Bowie was a hoot, from his searing trombone leads to his devil-may-care conga playing, the mild obscenities he’d grunt and thrust between lyrics, and his hilarious nuggets of spoken-word: “I try to keep my tuxedo on for a few minutes, but it gets too funky!”

Ahmad Jamal, who was given the Donostiako Jazzaldia Award by San Sebastian Mayor Odón Elorza, presented a piano-trio model in aesthetic opposition to opening night’s concert with the more limber Keith Jarrett Trio. Jamal’s trio, full of reined-in, hard-spun melodic improvisations and taut rhythmic shifts that suggest the sort of acoustic prog we associate with groups like The Bad Plus, is lead resolutely by the pianist through physical gestures. (Jamal also exhibits a Monk-like enthusiasm for his soloists.) This trio with bassist James Cammack and drummer James Johnson performed with the sense of urgency and drama Jamal has explored in the past two decades. (In other words, his ’50s recordings, from the era when Jamal faced an unfair pegging of “cocktail pianist,” often suggest an entirely different player-he fills open space rather than exploits it now.) “The Aftermath” was particularly effective, with shards of melody released in fits and starts and some stark shifts in volume.

Kenny Barron’s trio with bassist Kiyoshi Kitagawa and the celebrated Cuban drummer Francisco Mela performed a standards-heavy set that also included material from their The Traveler record (sans its roster of heavy-hitting guests). Highlights included “Softly, As in a Morning Sunrise,” Monk’s “Ask Me Now,” a solo piano rendition of “Memories of You,” a version of “You’ve Changed” that pointed up Kitagawa’s deep melodic yearning, and Barron’s own Wayne Shorter-like composition “The Traveler.” It represented an ideal of modern-mainstream jazz, with a sizable detraction: Mela’s drumming, usually full of bravado but still thoughtful, was full of bombast on this night, wrought with overlong solos that lacked coherent ideas (reaching around to repeatedly bash his crash cymbals?) and unnecessary volume.

Speaking of volume, San Sebastian also played host to two eventful fusion lineups: Return to Forever and the Soft Machine Legacy band. In an era when jazz’s commerciality seems to wane a little more each day, the Return to Forever tour was a healthy bump in the music’s balance sheet, a welcomed opportunity for nostalgia, and a chance for younger audiences to experience the “jazz + rock” hype that eluded them on its first go-around. Some of the back-in-the-day flavor that made the tour’s American stops so much fun-say, mulleted fusion fans tailgating in an amphitheatre parking lot-were impossible in San Sebastian, but oh well. Beginning with a cosmic, ’70s-style anticipatory overture and a few words of thanks from Chick Corea, the quartet launched into a definitive RTF burner, “Hymn of the Seventh Galaxy,” and it was off to the races. A carefully designed tour split into electric and acoustic portions and accommodating a hit parade, solo spotlights and reflective dialog from each member about what the reunion means (other than a rock-healthy paycheck), it was sharply executed but unlikely to change your mind about this group or heyday fusion in general. From “Hymn” and “Vulcan Worlds” to the encore, “Duel of the Jester and the Tyrant,” you were either enamored by the dexterity and force of the spectacle (Stanley Clarke turned even his upright bass spotlight into a clinic), or counting notes and nodding off.

To considerably less fanfare, the Soft Machine Legacy performed in the Kursaal’s smaller room on the festival’s final night, providing more conceptual ingenuity if less precision than RTF. Featuring bassist Hugh Hopper, woodwind player Theo Travis, drummer John Marshall, and worthy Allan Holdsworth replacement John Etheridge on guitar, the quartet entertained by turns trippy and tour de force: “The Steamer” compounded prog with postbop, “Chloe & the Pirates” was a reminder of British prog’s entanglements with psychedelia, and “In the Back Room” proved a deliciously skewed take on funk. It was a suitably eclectic capper to an even more diverse week of music.