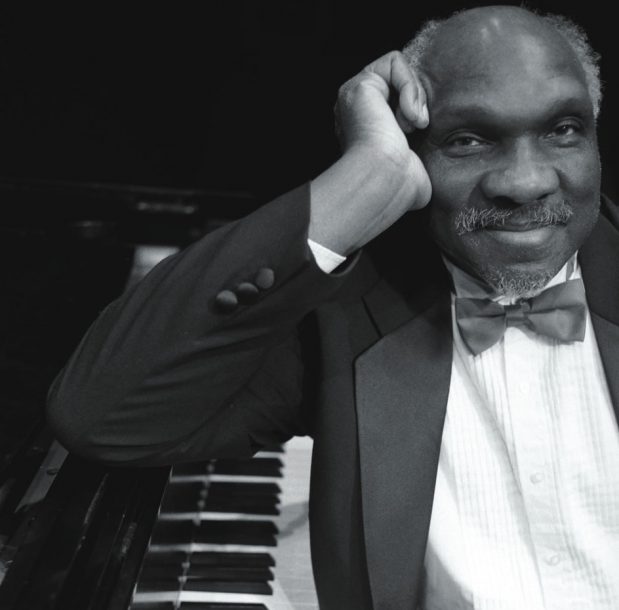 He and Frank Strozier, the alto saxophonist who played with Mabern in the Chicago group MJT+3, moved together, and upon checking their bags at the hotel, they headed straight to Birdland.

Cannonball Adderley, whom both men met during their time in the Windy City, was standing outside the club. “Hey, Big Hands,” Adderley said to the 23-year-old Mabern, “you want a gig?” Thinking the saxophonist was offering him a spot in his new group, Mabern said, “Yes.”

Instead, Adderley quickly ushered him into Birdland, where Harry “Sweets” Edison was leading a band with Elvin Jones, Jimmy Forrest, Gene Ramey and Tommy Flanagan. Mabern wound up on the bandstand, where Edison gave him minimal instructions: “‘Habit,’ eight-bar introduction, A-flat.” The song was unfamiliar, but the nervous Mabern wasn’t going to object.

One chorus later, Mabern realized he was playing “You’re Getting to Be a Habit With Me,” and by then he had figured out the changes. When the song was over, Edison offered him a spot replacing Flanagan, who was about to join J.J. Johnson’s touring band.

Mabern hadn’t realized he was being auditioned, but he accepted the offer, thus beginning a chain of events that has kept the pianist as a sought-after sideman ever since.

Harold Mabern Jr. was born in Memphis, Tenn., on March 20, 1936. After graduating from high school in 1954, he moved to Chicago, where he planned to attend the American Conservatory of Music. Finances precluded school, so Mabern began to explore the city’s jazz scene, which proved to be a wise decision. “Chicago was a unique town,” he says. “It’s almost like everybody on every instrument had their own sound because you had to play all kinds of jobs. You could go sit in with people and whatever you played with Eddie Harris’ group wouldn’t work with Johnny Griffin’s group. Even in the same city, everybody had a different repertoire.”

Mabern and fellow Memphis native Strozier hooked up with drummer-leader Walter Perkins for his MJT+3 quintet. (The initials stood for Modern Jazz Two, for the horns, with the +3 signifying the rhythm section.) The MJT+3 had decided to move to New York as a group, and the migration could have posed problems for the new arrivals, but Mabern fit in immediately. “A lot of people are going to say, ‘Harold Mabern really didn’t pay any dues.’ Not so. I did pay dues, and I’m still paying them, in a sense,” he says a few hours before an early-winter 2002 show with his Contemporary Piano Ensemble at Pittsburgh’s Manchester Craftsmen’s Guild. “What I did was I made up my mind: If I go to New York, I was not going to go there and sit in a hotel. I was going to be out meeting people, showing my face to promote myself.”

He was off to a good start. Edison’s band took Mabern right back to Chicago for a two-week booking. While in town, Jimmy Forrest brought the band (minus Edison) into the studio and made a recording for Delmark, All the Gin Is Gone, which included guitarist Grant Green, who flew in from East St. Louis. Upon returning to New York, Mabern sat in with Lionel Hampton. His reputation got around, and within a few years Mabern was playing with Roy Haynes, Betty Carter and Miles Davis, and appearing on Blue Note albums by Hank Mobley, Jackie McLean and Lee Morgan during the 1960s.

In 1962 the MJT+3 broke up, and in 1963 Mabern went on tour with Haynes. Upon his return he received an offer from Carter, asking him to back her for two weeks at the Birdland, as well as one from Davis, who wanted to talk to him about a West Coast tour. Painter Richard Jennings, better known as Prophet, recommended Mabern to Davis. “He thought I could play for Miles because I wouldn’t be obtrusive,” Mabern says. “No matter what I did, I wouldn’t get in his way.”

After finishing the engagement with Carter, Mabern flew out to San Francisco for what he calls a beautiful extended stay with Davis at the Black Hawk club. “Everybody was saying Miles is not going to be happy, blah blah blah,” he says. “He came to work every night and was there before the gig. Me, George Coleman, Frank Strozier, Ron Carter and Jimmy Cobb, we had a wonderful six weeks, man.”

Of the many bandleaders with whom he’s played, Mabern describes trumpeter Lee Morgan as one of his favorites—as a leader and a person. “He gave you a chance to grow musically,” he says. “That’s because Lee was an unselfish person and let us play our music. We only did about three or four of his tunes. All the other music was my music, Billy Harper’s music or Bennie Maupin’s music.”

While the constant work as a supporting player might leave some musicians yearning for the spotlight, Mabern was too occupied to feel that way. “Sure, I said to myself, ‘I hope one day I get to do at least one trio date.’ That’s every piano player’s dream. But it wasn’t such that I said, ‘I’ve got to do this, I’ve got to do this.’ I just took it as it came, and as long as I was working, I was satisfied.”

Mabern has worked hard to keep himself visible, but his playing is what sealed his reputation as a first-rate accompanist. “Most of the gigs I’ve gotten, I always tell young people, is because of the way I comp on the piano,” he says. “People love musicians who can comp good. I say, before you can be a great soloist, you should try to learn how to be an accompanist.”

The Piano Choir was started in the early 1970s, and it has recorded three albums, including a tribute to Duke Ellington. Other than the occasional use of hand percussion, their sound consists of nothing but electric and acoustic pianos, which Mabern says requires a deep concentration on the rhythm of the music. Although the Contemporary Piano Ensemble includes five pianists, the musicians take turns playing in groups of four. The group, which also includes bass and drums, formed in 1994 to pay tribute to Phineas Newborn, Jr., the gifted pianist whose talent and general attitude toward music left an indelible mark on Mabern from the earliest days of his hometown of Memphis. But it also incorporates pieces by all members of the group. “We put our egos aside because we all love and respect one another, and the love and respect we have for the music is greater than what we would think about ourselves,” Mabern says. “The person we’re doing this for, in the name of Phineas Newborn, brings us closer together.”

While growing up in Memphis, the teenaged Mabern played jazz with peers such as Strozier, tenor saxophonist George Coleman and trumpeter Booker Little. No one, however, affected the young pianist as much as Phineas Newborn, who, at four years Mabern’s senior, became a friend and instructor. “Anything you name about the piano, he had in his playing,” Mabern says. “Complete orchestration, crystal-clear touch, phenomenal technique. He had more technique in his left hand than most of us have in our right hands. He could put his right hand in his pocket and play complete compositions with his left hand.”

Newborn was a true genius, Mabern insists. He was adept on numerous instruments besides piano, he played music around the clock and he wasn’t above learning from his students. Mabern recalls teaching Newborn Clifford Brown’s “Daahoud” when the younger pianist made a return visit to Memphis. “On his first record date, he recorded it, which made me feel good,” Mabern says. “That was my claim to fame: saying I taught my teacher something.”

Mabern has taught his students more than just something at William Patterson College, in New Jersey, where he has taught for 22 years. Each Tuesday, he gives four private lessons and two ensembles. Teaching music from techniques that he learned in “the university of the streets” is not without its challenges, but Mabern sees that rewards come with it, too. “I’ve had some piano students that are so good, they teach me,” he says. “So what I do is teach them songs: Play the music that Charlie Parker played, which was standards. If you can play those, you can play anything. It teaches discipline that way.”

Mabern’s former student Eric Alexander returned the favor and used the pianist on six of his albums, including last year’s Summit Meeting (Milestone). “He’s kept me so busy, in fact I’ve worked more [in 2002] than I have in 50 years,” Mabern says. “He’s getting better right before my eyes. He’s constantly improving because he’s never satisfied.”

Working as a support player and in piano collectives has eclipsed Mabern’s own small but sturdy leader discography. Mabern’s recent CDs have been released only in Japan, including Mabern’s Grooveyard (DIW, 1998)—a solid trio date with Christian McBride and Tony Reedus that features a set of off-the-beaten track tunes and the excellent original “AON”—and Maya With Love (DIW, 2000).

Along with Summit Meeting, 2002 saw the release of Mabern’s Kiss of Fire (Venus, Japan), which he says turned out to be the best-selling album of his career. Ever the optimist, Mabern points out that these releases have built up a following in Japan, where he toured with Alexander and toured there in March 2003, and his label is “very honorable” when it comes to royalties.

Nevertheless, he would like to get a deal in the U.S. “I’ve got some ideas for some certain pop songs I’d like to do,” he says. “I did a record [in 1970] called Greasy Kids Stuff! with Hubert Laws, Lee Morgan, Idris Muhammad and Buster Williams. I put this Jackson Five song on it, ‘I Want You Back,’ and people are still talking about it. Now, if that had been with a bigger company—Prestige had a limited budget as far as distribution—that record could have been a big hit.”

While Mabern would like greater recognition at home, the pianist says he doesn’t find himself complaining too much. “As Mulgrew Miller says, ‘I don’t look left, I don’t look right. I just look straight ahead and keep going.’ Just try to be pure at heart, be honest to the music, and the rest will take you.”

“I must be backlogged with about 30 CDs, including eight more my daughter got me for Christmas.” In recent months, Mabern says he has been listening to his own Kiss of Fire (Venus) album as well as Evolution (Mercury) by adult-contemporary singer Oleta Adams. “I call her the female Donny Hathaway. I practically wore out her record.”

“I’m in no position to request, but my preference is naturally the Steinway D, but if you can’t get a D, any Steinway.” At home in Brooklyn, Mabern doesn’t have the space for a large piano, so he plays a Roland RD-500. “It has 88 keys that are weighted. For an electric piano, it’s one of the best I’ve ever seen in my life.”