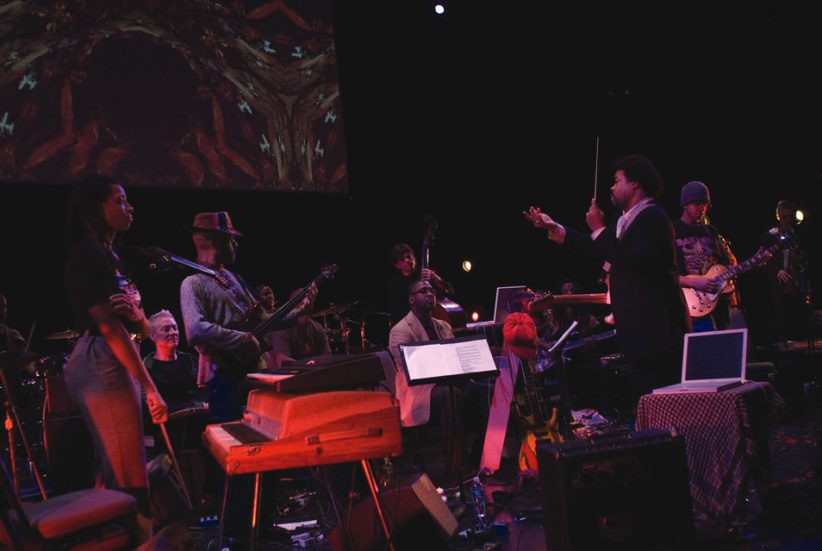 In September of 1999, author, critic and Black Rock Coalition co-founder Greg Tate had the notion to form a new band that captured some of what he calls “the extreme kind of Stygian darkness and gnarly, Abyssinian, evil-sounding vibe and crusty, Jurassic, tectonic funk of Miles Davis’ Dark Magus and Agharta bands.” A volatile outfit comprised of three guitars with rhythm section, Burnt Sugar played its earliest gigs at alternative-rock emporiums like CBGB, featuring Tate wailing away on his ax with Pete Cosey-like abandon.

Evolving over time into a sprawling ensemble that took its cues from Sun Ra, the Art Ensemble of Chicago and Parliament-Funkadelic, as well as Jimi Hendrix and electric Miles, Burnt Sugar the Arkestra Chamber has now expanded to 15 to 20 musicians with a four-piece horn section and a full complement of vocalists. And auteur Tate has traded his guitar for a baton, following in the footsteps of “conduction” maestro Lawrence “Butch” Morris.

“I’ve been watching Butch do the conductions since the first one he did at [Manhattan arts space] the Kitchen back in 1985, which came out as a live recording, Current Trends in Racism in Modern America [Sound Aspects],” says Tate. “Of the hundreds of conductions that he’s done in New York, I’ve probably seen about 30 or more. So I’ve been a huge admirer of Butch’s work and his ability to just pull music out of musicians in the moment, to create symphonies in the moment.”

The epiphany that caused Tate to take up the baton came to him at a gig with Morris at the now-defunct Cooler in Manhattan’s meatpacking district. “It’s funny, because it wasn’t anything at the concert that made this indelible impression on me-it was what happened before the concert. I brought a big Peavey amp to the gig and took that heavy-ass thing down all those stairs with a guitar and bag of effects, got set up and came back upstairs for air. And as soon as I hit the street I look up and Butch is getting out of a cab, and he’s just got this little pool-cue case with his baton in it. And I was like, ‘Huh! Wouldn’t I love to do that!'”

On Making Love to the Dark Ages (LiveWired), the latest recording by Burnt Sugar the Arkestra Chamber, Tate wields a baton along with a laptop and occasionally his trusty guitar. The results range from his expansive meditation on slavery, “Chains and Water,” full of free-blowing conversations between the horns and soulful vocals supplied by dynamic singer Lisala, to the electric Miles-ish groover “Love to Tical,” to the dreamlike, ambient, Eno-meets-Teo soundscape “Dominata,” which incorporates his audacious laptop experiments, to an intriguing mashup of Tate’s funky “Thorazine” with the Ron Carter-Miles Davis composition “Eighty-One” (from E.S.P.).

Other special guests in this rotating cast of characters on Making Love to the Dark Ages include violinist Mazz Swift, trombonist David Smith and tenor saxophonist V. Jeffrey Smith. “Throughout the band there are definitely people who approach their instrument with more of an orchestral approach than a genre- or idiomatic-based approach,” says Tate. “I think they’re coming at it like painters and poets and scions of Bernard Herrmann or [Ennio] Morricone. People of different instruments in the band think of bringing those kinds of sensibilities. They’re colorists, really.”

While the band has recently taken to performing radically re-imagined covers of tunes by everyone from Hendrix and Chaka Khan to Grace Jones, Michael Jackson, Iggy Pop and Joni Mitchell, Tate’s spontaneous conduction and the ensemble’s adeptness at pure improv remain the ensemble’s focus. “It’s really great having cats that when you want them to just go crazy, just paint the sky red, and bam-they’re there. And then they can just pull it all the way in and interpret really classic pieces of material, too. You know, it’s kind of a real powerful piece of machine we’re driving.”

To commemorate the 10th anniversary of Burnt Sugar the Arkestra Chamber, Tate is remixing and remastering the group’s first recording, Blood on the Leaf, which is due out in September.