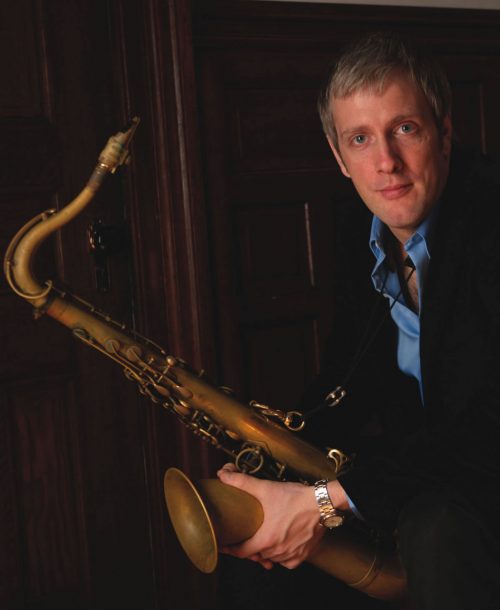 Until about three years ago, Grant Stewart was usually the youngest musician on the bandstand. “I’ve always been drawn to older musicians,” the 36-year-old tenor saxophonist muses. “My first music teacher, Pete Schofield, put me in his big band; there I was, surrounded by people who were around 30. I was 14.”

Stewart’s current quintet, which plays every Tuesday night at Smalls in Greenwich Village, mostly comprises musicians in their early fifties: guitarist Joe Cohn, bassist Joel Forbes and pianist Michael Weiss. Stewart’s younger brother, Phil, the drummer since 2005, saves the saxophonist from being the baby in his own group.

The age disparity may have something to do with Stewart’s taste. His music, as documented on his new CD Young at Heart (Sharp Nine), is a throwback to the jazz mainstream of a half-century ago: steady swinging, muscular hard bop via standards (the title track and “Repetition”), obscurities from titans like Ellington and Jobim, and one original inspired by the work of Jackie McLean. While his recording quartet (bassist Joe Farnsworth, pianist Tardo Hammer and bassist Peter Washington) are mostly younger than his regular band, Stewart is still the youngest.

His own sound on the horn is lean and sinewy, yet flush with lyricism, humor and rhythmic possibilities, much like tenor icons Dexter Gordon and Sonny Rollins, to whom Stewart is frequently compared. This, he says, doesn’t bother him in the least: “How could I deny the huge influence of those great musicians?”

But Stewart is no ideologue, nor part of some novelty “retro” movement; he’s just playing the music he loves. “I just like that jazz feel,” he says. “It’s not the sound of a specific era or player that I’m after. I’m after a specific feel. I like playing melodically, I like the swing.” Though Stewart does have his idols, he aspires not to their sound, but to their timelessness. “When you hear Coleman Hawkins playing ‘Picasso,’ he’s doing free, pure improvisation before anyone even had that idea. And I listen to Bird and, to me, he sounds more modern than a lot of the people who are actually modern.”

Hawkins and Charlie Parker, along with Wardell Gray, were among the first musicians that Stewart ever heard; his father, a high school teacher and part-time jazz guitarist in Toronto, would transcribe their solos, which 10-year-old Stewart would then learn to play on alto sax. In fact, his first experience in a combo was at home, jamming with his father and brother Phil (then on piano) before joining Schofield’s big band.

By the time he turned 18 in 1989, Stewart had switched to tenor and was making his name in Toronto’s then-flourishing jazz scene. The city was bursting with clubs and other places that even a teenager could play in, and Stewart and a quartet he’d formed had a regular booking at downtown’s C’est What café and pub. He was also associating with veterans like saxophonist Bob Mover, a mentor who would play him records, invite him along on gigs, and generally give him a foothold on the Toronto circuit. All the same, Stewart recognized that New York City remained “the Holy Land of jazz”; a year later he would quit Canada for the Big Apple.

After apprenticeships with Peter Bernstein and Jesse Davis, Stewart began gigging at Smalls as soon as Mitch Borden opened the club in 1993. “It’ been a home base for me a ever since,” he says. “Mitch is a one-of-a-kind club owner that helped a lot of guys in many ways. Smalls was very important to me: It gave me a place to work out my music and develop.”

That development has given Stewart ample offstage opportunities, too. He has recorded eight albums under his own name and two more as co-leader with saxophonist Eric Alexander, each further refining Stewart’s classic jazz sound. His focus in growing as a musician is not on composition, just his horn. Improvising, he says, is his composition; plus, “There’s so many great tunes out there that nobody pays attention to. I’d rather bring those to people than try to push my own tunes on them.”

It’s an unusual approach, but he must be on the right track. Stewart has gained an appreciative audience, and not just in the Village; he regularly performs throughout the world. Indeed, just after the release of Young at Heart in March, Stewart was booked to spend the better part of a month touring Spain, including some dates with his old friend Peter Bernstein. Though these extended leaves mean more work for Smalls’ booking personnel, “It works itself out,” he says. “They can’t get too sick of me this way.”

For a guy who’s so often the youngest in the band, Grant Stewart is a wise man.