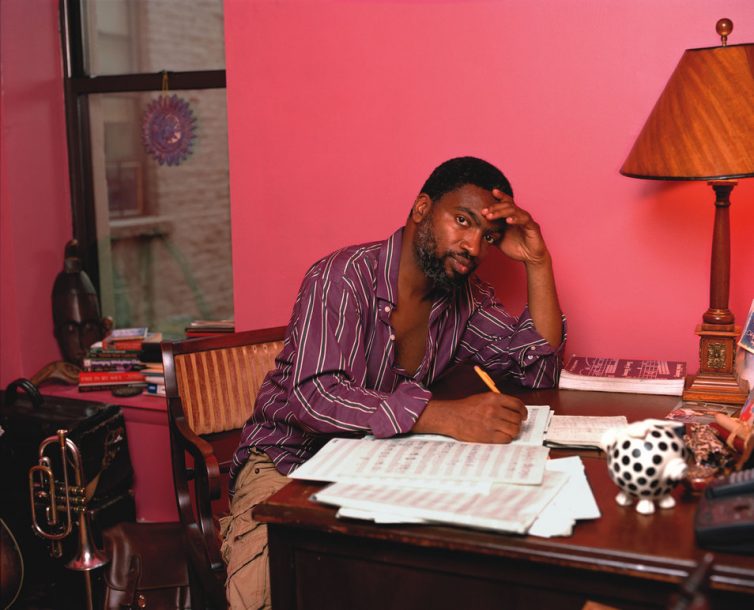 Graham Haynes doesn’t own an iPod or even a cell phone. Most of the CDs and DVDs on the shelf in his comfy apartment on Manhattan’s Upper West Side, a block from the northwest corner of Central Park, belong to his girlfriend, Lincoln Center lobbyist Melissa Thornton, with whom Haynes shares the space. The dog, an amiable black poodle named Niko, lived here with Melissa before Haynes arrived six months ago, but doesn’t seem at all put off by the new roommate.

It’s not that Haynes doesn’t like to hang onto things; he just tends to leave them scattered around. He’s lived something of a nomadic life, and the various moves-he spent time in Paris and Westchester County, due north of New York City, prior to coming here-combined with the relative lack of space in his current abode, simply don’t allow for accumulation.

If you watch a lot of movies-and Haynes does, though he prefers the classics and foreign films to current multiplex fare-you might not believe it, but his cozy, unadorned one-bedroom is more typical of an NYC dwelling than those ornately appointed drive-through palaces Hollywood seems to think a struggling waitress (or even a nonstruggling musician) could afford. Haynes’ kitchen is barely large enough to fit one cook, let alone two, there is no art on the walls of the apartment and the furnishings are utilitarian, not something out of a fancy-schmancy showroom.

There is no home recording studio in sight and although there’s a small room that Haynes uses as his office/workspace, the only visible musical instrument is a basic electronic keyboard, presently propped up against the wall in a corner of the living room.

But there is no denying the apartment’s homey appeal, and Haynes enjoys the quietude-during weekdays, the building’s relative stillness allows him to write music, which he does in longhand, directly from head to paper.

And therein lies the irony: The man living this relatively low-tech existence is one of the most cutting-edge, gizmo-happy musicians on the scene. Haynes’ spartan domestic life and soft-spoken manner are a complete 180 from the dense, sometimes manic music created by the 47-year-old cornetist, composer and sound manipulator. Haynes’ newest album, Full Circle (RKM), is a progressive explosion of post-electronica, searing Fillmore-era Miles/Mahavishnu fusion, radically deep funk, free jazz and a general spaceyness that early Pink Floyd and King Crimson would have envied. One of the eight other musicians on the record, Leon Gruenbaum, doesn’t just play standard keyboards; he plays something called the Samchillian Tip Tip Tip Cheeepeeeee, a complex MIDI controller that utilizes a modified ergonomic keyboard to trigger changes of pitch.

Clearly, Haynes tips toward the avant-garde end of the spectrum, but on the rare occasion he listens to recorded music at home-he much prefers the radio-it’s more likely to be a vinyl opera LP caressing his ears than anything remotely designated as jazz. Reaching toward the floor next to his sofa, he retrieves three vintage albums. He picked them up recently from a sidewalk seller not far from home. “This was like a dollar, this was five, this was five,” he says. “They’re in really good shape.”

And what’s got him excited this day is that on the following evening he will be in the audience at Lincoln Center to take in Siegfried, one of the four operas that make up Wagner’s Ring Cycle. The German composer looms largely within Haynes’ psyche: His last album, 2000’s BPM, crossbred jazz, dancefloor rhythms, world music and sampled opera-the opening track was called “Variations on a Theme by Wagner.”

“I don’t know why I like opera,” says Haynes at first, and then he considers. “The voice and the magnitude of it; the bigness of the orchestra and the set design. The whole grandeur of it, the spectacle of it. I studied a little bit of classical music theory and history at Queens College, and that’s when I got really interested in classical music and opera. I’ve just stayed a fan and tried to listen to as much as possible.”

Although Haynes relishes the culture that New York has to offer-he spends a great deal of time at the Lincoln Center Performing Arts Library and at museums-he also likes to get out of the city. For that purpose, he does own a car, but he keeps it in Queens, the borough where he was born the son of legendary jazz drummer Roy Haynes.

“Mostly we drive my girlfriend’s car around here,” says Haynes. “I drive mine if we’re going out of the city or back to Long Island, where my dad lives. So the car thing works a lot better if I keep it out there. It’s ridiculous here,” he says, “because you have to move it every day [to comply with Manhattan’s alternate-side parking regulations]-except for Wednesday.”

The car is, in fact, registered in Seattle, so every couple of years Haynes gets behind the wheel and drives cross-country. “Last April was the fourth time. I drive it out there, get an inspection and drive it back. I take the main highways, but I always try to stop and go sightseeing somewhere. Besides, I’m starting to dislike flying. There’s a lot more turbulence; with the climate being what it is, there’s a lot of crazy stuff now.”

What Haynes does enjoy, risky as it might seem to some, is riding his bicycle around the city. “I ride around Central Park,” he says. “The cool thing now is the bike lanes. They’ll take you all the way down [to Lower Manhattan], so sometimes I’ll ride to the Brooklyn Bridge. If you pace it, if you ride from here to the end of the city once a week”-for the benefit of non-New Yorkers, we’re talking several miles of dodging traffic and pedestrians here-“after three or four weeks you can do it straight without stopping.”

“My parents took me to see Duke Ellington’s Sacred Concert at the Cathedral Church of St. John the Divine. That’s a major historical point for me. It was long and I was a kid so I don’t particularly remember much about the music, but the cathedral was impressive.”

“I like the computer. I’ll travel around with a laptop, but I won’t travel around with a cell phone if I can help it. I need to be able to hear myself think. There are too many products coming out and too many people buying them, people using them while they’re driving and getting in accidents. I heard on the news that they’re trying to pass a no-texting-while-driving law. To think that you would have to do that…”

Tied Up at the Moment

“I have a bag of bowties that I’ve been wearing. I don’t know how I got into it-maybe something I saw in a magazine. These are the real ones that you tie yourself. I had to buy a tie and then ask the guy to show me how to tie it. I have about 20 of them now. They’re a lot of different colors and designs, like paisley. I don’t wear them when I play and I don’t wear them when it’s hot. I don’t like to have a shirt buttoned tight in the summer.”

“I didn’t grow up in the church, but I went through a period of about three years where I went to church and I was also performing a lot in church. Then, when I was about 35, I started to read a lot of books on metaphysics and Eastern religions. One of my favorites is called I Am That: Talks With Sri Nisargadatta [Maharaj]. It’s on Indian philosophy. They ask the guru questions and he answers them; that’s the whole book.”

Woodshedding in the Wilderness

“I play my horn in the parks all the time. I play in the tunnels. My favorite place to practice is Riverside Park. I like to watch the [Hudson] river when I play my long tones. I go out there and spend hours watching the river and practicing, and then I go in the tunnels. I like the sound in there. Sometimes people throw me money. The other day I was in Central Park and somebody asked to play my horn-‘Can I blow that?'”

“I like staying in those hotels where you have a little kitchen. I buy a large amount of groceries and bring them back and eat that way. I like eating out in most of Europe. But now stuff is more expensive than it used to be. In Italy I used to eat out for $8 and get a three- or four-course meal. But I can’t do that anymore. Now that’s almost $30. I don’t splurge as much as I used to.”