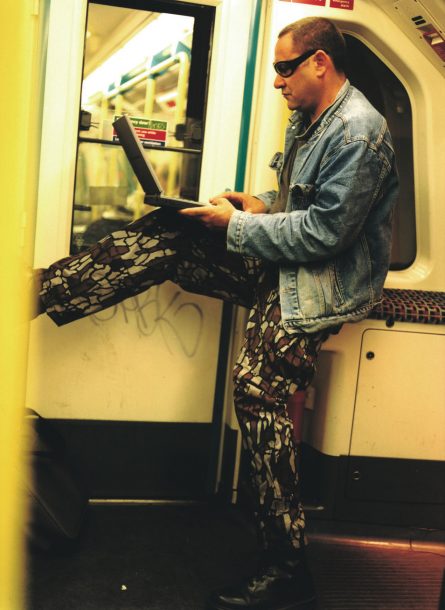 Saxophonist Gilad Atzmon pledges allegiance to Coltrane, Parker, Adderley and Brecker, asserting, “I am at heart a bebop player,” but believes he was born in the wrong time and the wrong place. The wrong time because “Jazz, the musical language I understand the best, has become a retrospective art form rather than authentic expression,” and in the wrong place because, “I was brought up in a small colonial nationalistic province in the eastern corner of the Mediterranean Sea.”

Raised in Israel as a secular Jew, Atzmon remained in the country of his birth until his early 30s before moving to London, where he quickly established himself as an exciting new voice on the European jazz scene. He’s equally fluent on soprano, alto, tenor and baritone saxes, clarinet, flutes and the sol (a Turkish clarinet) and zurna (a primitive double-reed instrument). After two highly acclaimed albums on the Enja label-2000’s Gilad Atzmon & the Orient House Ensemble and 2001’s Nostalgico-his latest album, Exile (Justin Time/Enja), represents an important milestone in his musical career to date.

Describing himself as a devoted political artist, Atzmon’s socio-political views go straight to the heart of his music. Arguing for a solution to the Israeli-Palestinian conflict based on equality and the Palestinian right of return, he uses Jewish and Arabic folk themes, swirling Coltrane-inspired modal jazz and hypnotic vocals to underpin his message.

Augmenting his regular quartet (called the Orient House Ensemble after the Palestinian Authority’s ravaged East Jerusalem headquarters) and featuring the talented young English pianist Frank Harrison and Israeli expatriates Yaron Stavi on bass and Asaf Sirkis on drums, with Mediterranean accordionists, Romanian flautists, Tunisian oud virtuoso Dhafer Youssef and, on two tracks, the Palestinian singer and musicologist Reem Kelani (who recently made a series documentaries for BBC radio called Distant Chords dealing with the music of displaced refugee groups around the world), Atzmon has produced one of the most exhilarating and passionate jazz albums in years.

Passion, Atzmon believes, returns an essential ingredient to jazz that has been missing since the ’60s. “For me, jazz in the ’50s and ’60s was very politically motivated. Black American musicians were politically and socially concerned, and jazz reflected these issues, a cry for freedom,” he says. Similarly, his own music, drawing its strength by reflecting the struggles of the Palestinian people, conveys intensely felt emotions. “How is it that people who have suffered so much and for so long can inflict so much pain on the other?” he questions. “How can Zionists, who are motivated by a genuine desire to return, be so blind when it comes to the very similar Palestinian desire?”

Atzmon emphasizes the similarities and commonalties between Jewish and Arabic cultures and peoples, who, he points out, lived in perfect harmony for centuries by mixing Jewish and Arabic melodies. “For instance, ‘Al-Quds’ is an Arabic interpretation of an Israeli tune that became the anthem of the ’67 war. In our version we use Mahmoud Darwish’s lyrics, so the longing for a homeland goes far beyond racial and nationalistic boundaries. In April 2002, the Jenin refugee camp was devastated by the Israeli army. On ‘Jenin’ I want to take you there, based over a Jewish tune, and on the way I want to take you to Warsaw ghetto, Auschwitz. [It took] three takes, to get into that cry of babies caught under the rubble.”

After studying jazz and composition at the Rubin Academy of Music in Jerusalem, Atzmon earned a master’s in philosophy. After military service as a paramedic, he quickly developed into something of a renaissance man. He has composed for modern ballet, films and radio, toured with Memphis Slim and supported international jazz names such as Jack DeJohnette, Michel Petrucciani and Richie Beirach at festivals. He was a session musician in Israel, performing both Jewish and Arabic music, played rock there and in London, where he has recorded with the likes of Ian Dury and the Blockheads, Paul McCartney and Sinéad O’Connor.

In 2001, Atzmon wrote his first novel, A Guide to the Perplexed. Banned within weeks in Israel, it was subsequently published in some 18 countries, including Britain, Russia, Latin America, Japan and the USA. A satire dealing with the themes of identity and exile, voyeurism versus involvement and the brittleness of reality, its darkly comic take highlights the dangers of racial purity and the position of the outsider in society.

But it is through music that Atzmon finds his greatest expression. “Artists, people who are moved by aesthetic principles, can move people towards change,” he says. “There is a very strong American tendency in my playing. I am also an exile, I was brought up in Palestine, a place where many, many cultures meet, and I feel very natural incorporating these elements into jazz. In Europe today you can hear so many artists and so many influences and so many different ideas that you cannot categorize it all. It just proves the point-freedom.”