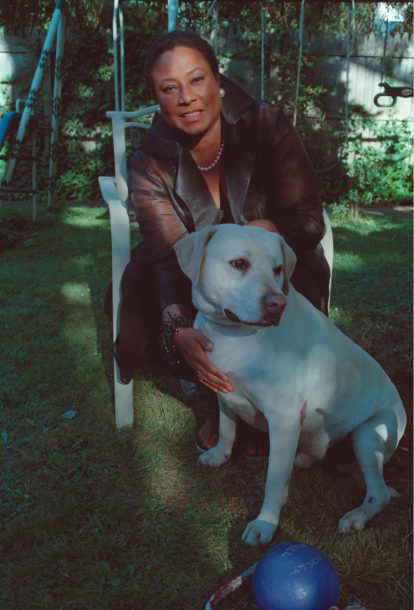 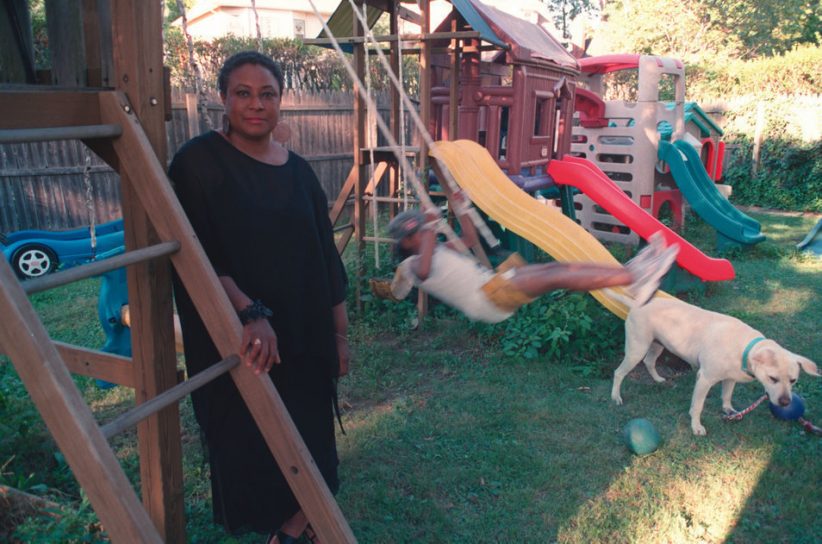 You’d drive right past Geri Allen’s home in semi-upscale suburban Essex County, N.J., if you weren’t looking for it. A high row of hedges separates a wooden fence from a busy local street, with only a number on the front gate breaking the anonymity. Once on the property, you’re greeted by a thick-bodied white dog that appears to be a mix between a retriever and a pit bull. He may look fierce, but his girth is greater than his growl. In the weathered blue front door someone has left their business card as the “head scooper” of a “professional dog waste cleanup” service whose slogan is “they poop, we scoop.”

The side yard of the home includes a collection of childrens’ swings and slides that would be the envy of most neighborhoods. A short stroll away from such upscale stores as Williams-Sonoma, this area of soccer-mom-rich Montclair likes to differentiate itself from the rest of the town with the prefix “Upper.” The designation not only indicates its geographic location on South Mountain but also offers a clue to the price range of its homes in the low seven figures.

Geri Allen and Wallace Roney’s house, with its lived-in yard and visitor-friendly dog, is a bit more downscale than the rest of the area. On this late-summer’s day, most of the furniture on the home’s first floor is missing in preparation for the painters, while a small air conditioner runs at full blast. Allen’s music room/study off the main floor is packed to the hilt with a piano, drum set, computer and sheet music.

Allen and Roney are engaged in the ultimate juggling act: raising their three children, Barbara, Wallace and Laila, in as normal a suburban setting as possible while also maintaining full-time careers as jazz musicians. Allen credits family with helping to hold things together, always available to help out when necessary.

“My focus is my children and my husband. My husband and my children,” said Allen, who also commutes to an associate professor’s post at the University of Michigan just outside her native Detroit.

“This summer for me was really great because I had a chance to consistently spend the whole summer with my children because Wallace was out on the road with McCoy Tyner,” she said. “One of us always tries to be here. If he is gone then I’m here, or vice versa. It really was wonderful, because I got to hang out with them every day. We went swimming and they were doing gymnastics programs. The children had breakthroughs musically. They were in the music program up at UMass [Amherst] for the summer [where Allen was teaching master classes with the likes of Billy Taylor, Sheila Jordan and John Blake], along with the one here [in Montclair]. It was so much fun watching them discover music…we never wanted to push it on them. If they wanted to do it, OK. If they didn’t, OK. Although we could hear they had talent. It was important not to put that pressure on them. They found it themselves this summer, and it was really kind of fun to watch them thinking about practicing and getting on the stage to perform.”

When pianist Allen wasn’t teaching and minding the kids, she was working on her latest extended work, “For the Healing of the Nations,” a 9/11-themed piece commissioned by Meet the Composer Foundation and the Walt Whitman Arts Center that debuted Sept. 10 in Camden, N.J. That piece and Timeless Portraits and Dreams, her latest Telarc album, have seen her absorbed in exploring various religious texts over the past year.

Raising the children and maintaining careers “is what it is. I know whatever parents are out there will understand that,” Allen laughed. “We put one foot in front of the other and we try as much as we can to be organized, but a lot of the time we’re improvising to figure out how we [can] make this happen. The way we look at things, they’re first. And then we find our way around not having to disrupt them.”

The suburban setting approximates the upbringing the two musicians had in Philadelphia and Detroit, while the proximity to New York, some 20 miles away, keeps them in touch with the cultural scene, Allen said. “I love New York. Every time I go back…the flashes come back: the walking around the city, the whole thing of learning the trains, really having paid the New York dues, so to speak, of really being a New Yorker,” she says. “I love all that about the city…it’s in me. But I’m really, really happy to be here, in a place where I can feel very kind of relaxed, the way that I grew up in the mid-west. I’m a Midwest kid from Detroit. We had a backyard…the kids growing up around us. That whole thing for me is really important…and Wallace, too. [Him] coming from Philadelphia, the feeling of continuity [is important].

Look! Up on the porch! It’s a bird! It’s a plane! It’s…Krypto, the family dog. Allen’s husband, trumpeter Wallace Roney, is a big fan of the Man of Steel, as well as Superboy’s best friend, Krypto, the superdog of D.C. Comics. As Wallace’s younger namesake grew up, he acquired his father’s love of the characters, and when he wanted to get a dog, the white Lab was given the name, Allen said. “Because Wallace is such a big fan and the D.C. Comics people know that, when we got the dog they said that they would register him as the Krypto. He’s the live version.”

Between her latest Telarc album, Timeless Portraits and Dreams, and a commission to create a 9/11 piece, Allen has been absorbed in “a lot of sacred text for the past year…including the Zohard, the Bible, the Quar’an and others…the major religions that believe in one God. There are definitely lines of continuity through all of them that I have found.”

The cosmopolitan atmosphere Allen encountered as a student at Howard University in Washington, D.C., carried over to food, and she acquired a taste for Ethiopian cuisine. Given Montclair’s multicultural makeup, Mesop, a nearby Ethiopian joint, is her local choice.

Harking back to her younger days in Manhattan, Allen cites Mamoun’s Falafel, a Greenwich Village mainstay, as a favorite. “As a young person, struggling in New York City, that was like a great meal. Really inexpensive. You could eat there every day and it was a really friendly place and you knew you were getting really healthy stuff. I’ll still go there after a gig. It’s open really late.” Allen also cites Famous Fish Market in Harlem on 145th and St. Nicholas Avenue. “And of course, [soul food landmark] Sylvia’s. That place is an institution. It’s been a while since I’ve been there, but I have her canned food in the pantry.”

“Godiva white chocolate. Cold Stone Creamery-they just opened a place up the street. Their [ice cream] is really addictive. If you’re going to do something wrong, you might as well do it right.”

“I do yoga, but I need to be more consistent with it. When I was living in Brooklyn, I had real discipline. But when you have children, their thing is first. I get into it at least two, three times a week. My children are all running now. We go to the track in the mornings and at night. That’s good for me.”

Mom on the Road

Although she’s planning to get a Web cam for her Apple iBook G4, Allen says she’s still “pretty much old school” when it comes to staying close to the family while on tour. “I have a tape of the kids talking that I take with me. And their photographs.”

“Eileen Fisher, Marion Lake-Oliver’s wife. She has a shop over here [in Montclair], Dem Two Hands. I shop there a lot.”