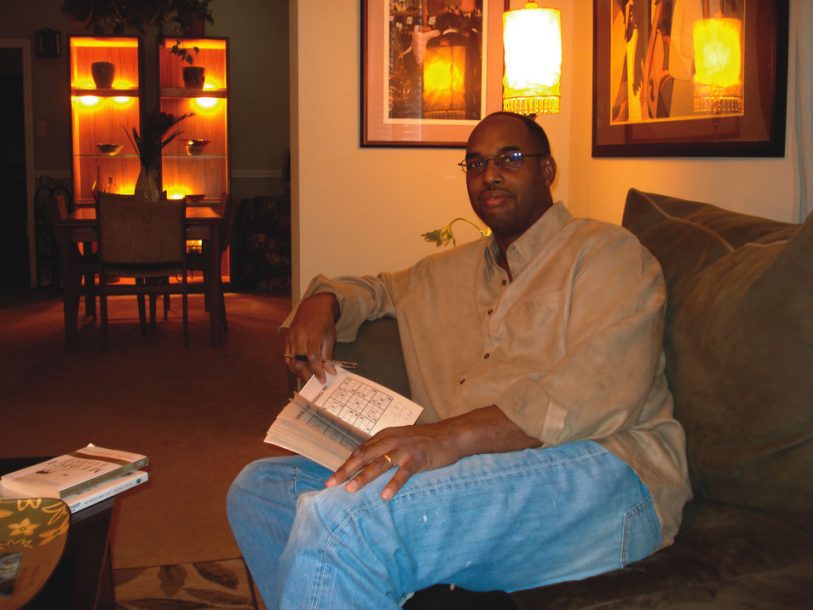 “I’m not a superstitious person, by any stretch of the imagination,” insists Gerald Veasley, a claim borne out by the fact that immediately upon taking a seat on the large, comfortable green couch in the bassist’s living room, I’m greeted in rapid succession by his two black cats.

Of course, no one feels the need to offer such a disclaimer without some tale of the supernatural to relate. Veasley lives in a cozy corner row house in the mostly working-class Overbrook section of Philadelphia, the type of neighborhood where people tend to live their whole lives, and leaving home rarely means moving farther than the next block. The previous owner of the house, Veasley explains, had grown up right around the corner.

“When he got married, his wife said, ‘If you buy me that house, I’ll make you the happiest man in the world.’ That’s all a man needs to hear, so he hustled and got his money together and bought her this house.”

Sadly, the wife passed away prematurely, but the house’s owner stayed on and raised the couple’s two children. But shortly after Veasley and his wife, Roxanne, moved in 12 years ago, he began noticing strange movements out of the corner of his eye.

“It always felt like somebody had just walked in or out of the room,” says Veasley. “I never wanted to share it with my wife because I felt like she’d be a little freaked out, but we were on vacation with another couple, trading stories, and when I brought it up she said, ‘You know what? I always saw the same thing.’

Rather than running out and hiring an exorcist, the couple took a strange comfort in the presence, which they assumed to be the former owner’s wife. “It’s the opposite of what you think about when you hear ‘ghost story.’ The house always had the feeling of a home where people were happy, where this woman really wanted to raise her kids and her husband had so much love that he kept her memory alive.”

That sense of dreams expressed but unfulfilled recurs when Veasley is asked about the large painting that dominates the dining room, opposite the “out-of-tune” upright piano and catacorner from shelves holding decorative bowls and vessels. The painting is an abstract piece comprised of blocks of solid earth tones. It’s the work of the mother of one of Roxanne Veasley’s best friends.

“Her mom’s dream was to move to Paris and to pursue her art, and she never made it-she was killed,” Veasley relates. “There’s something about this painting that looks so unfinished, but I may be reading into it because I know about her life. But it feels like there was more to do, and for her, there was more to do.”

As full of such personal reflections as the house is, the original deciding factor in its favor was much more practical. Built on a slight hill, it has an above-ground basement with a separate entrance, which until recently was Veasley’s home recording studio.

“My wife was out taking a walk and she saw a ‘For Sale’ sign,” Veasley recalls, “and when she came back to our two-bedroom apartment to tell me about it I was ticked off, because I had my equipment set up in a little nook and my friends and I were in the middle of recording. She showed me the basement and was like, ‘You can bring your musician friends in without them coming through the house.’ That was the appeal of the house.”

The studio is currently in the process of being converted into a den, partly because of a general stripping-down of Veasley’s musical process, but mainly because, he says, “I’m feeling a desire for home to really be home. I just put a small set-up in the spare bedroom, so I have a sketchpad, but I want the house to really be a private place.”

That desire to simplify his life may also be inspired in part by his wife’s interest in feng shui. “I owe her a lot in terms of her desire to declutter and to simplify,” he says. “In some ways, I’m a person that makes things too complicated. But she’s always cleaning out and getting rid of. We’re the family that has the garage sale. My wife’s mindset is if something’s not important to your life, why are you holding on to it? I won’t even go into how powerful a metaphor that is.”

Veasley is prone to drawing such philosophical parallels from everyday conversation, a result of reading he’s been doing recently into the creative process. While he refers to himself as a “greedy” reader with wide-ranging interests, his main objective in picking up a book is inspiration. “Not just inspiration for my musical life, but inspiration for my broader life. Sometimes just an idea is enough to make you a better person than you were a day before. A powerful idea can change things.”