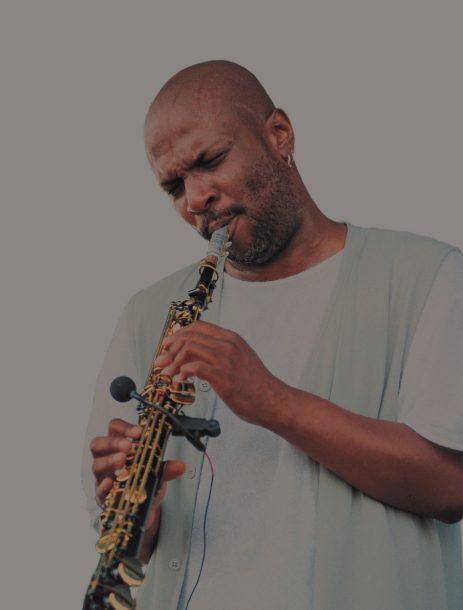 Much like a painter uses a brush to select colors from a palette, saxophonist George Howard has wielded his silken sound to blend elements of soul, pop and jazz into his signature funk-fusion style.

Howard, 41, has kept his urban-contemporary audiences happy via the thick grooves and lithe horn flair exhibited on albums such as Dancing in the Sun in 1985 and Do I Ever Cross Your Mind? in 1992.

Now, after carving a deep niche in contemporary music with 14 albums in 15 years, Howard says he’s ready to consider a shift in focus. His newest urban-flavored issue for GRP, Midnight Mood, “marks the end of one journey and hopefully the start of another,” he says, adding with a laugh, “I hope the audience comes along with me, because I’m goin’!

“I found a niche,” he says, “but I feel that there is always room for me to expand further. Music has always been about growth for me, a reflection of where I am and where I’m going.

Howard cites “Africa,” the experimental, multi-movement centerpiece of the new album, as his port of departure. “The particular rhythm in ‘Africa,’ played by Munyungo Jackson, is called ‘rhumba Mbatala.’ It signifies the movement of an old wise man whose presence alone commands honor and respect.

“Life has humbled me, but I know I am not a man-child anymore; I am a man and it’s time for me to start imparting information rather than extracting. It’s time for me to put it back; that’s what this song is all about.”

Howard, who has been to Africa several times, said he has always included a tribute to the African drum on his albums “because that’s where our music came from. I feel compelled to pay homage to the people who opened the door for me to broaden my life and my horizons; therein lies the honor of any kind of art.”

“I see myself as taking somewhat of a turn. More and more, I just want to play the type of music that lends access to stretching out, giving me what I need and folks what they want. Songs like ‘Dancing in the Sun,’ ‘Funk It Out’ and a couple of Miles Davis tunes like ‘JoJo’ on Love and Understanding, and ‘Tutu’ that I’ve played live.”

As part of his preparation for change, Howard began listening again to the legendary figure from his youth-John Coltrane. “Coltrane puts me back in touch with the various places I’ve been in an era that shaped my whole life. It was a reflective period, and Coltrane is without question the master of all time. His music wasn’t just jazz, black music, but music on a universal level.”

Growing up in Philadelphia, Howard was six when he began taking lessons at school on clarinet and bassoon. Soon he was selected as among the gifted students in his school, and given private lessons. By the time he was nine, young George knew he wanted to be a professional musician.

Learning to play an instrument was a window to the outside. “It was a chance to get out of the neighborhood and go to something totally different. It provided a form of escape for me, but also a discipline and a focus.

“Shirley Curtis was my first clarinet teacher in the second grade, and taught me at a private school for gifted students, the Settlement School of Music. She never wanted me to play saxophone because it wasn’t a ‘serious’ instrument. So I was ten, playing Vivaldi, and Handel’s ‘Water Music’ on clarinet, oboe and bassoon. But I wasn’t thinking of a career in classical music. Hell no, not at all.”

Howard said he didn’t want to try to fight the system.

“To be realistic about it, at that time it just didn’t seem acceptable. I can’t speak on it now, but (classical music) was a narrow institution at the time, narrow in the sense of acceptance of people of different backgrounds and cultures.

“I wanted to just play, to be in an environment where I could play and have a safe place to grow musically. And I didn’t think the classical institution would provide that for me.”

Although he continued private classical lessons until he was 15, his focus shifted when he was 13 after he convinced his public-school music teacher to let him take a tenor saxophone for the summer. “I said not to tell Mrs. Curtis, and started teaching myself. It was a Bundy student horn and easier to play than clarinet or oboe.”

“There was a time when I was listening to everything from James Brown and Jimi Hendrix to Yes and Emerson, Lake and Palmer. Once when I was trying to memorize Ronnie Bell’s solo from a Kool and the Gang recording, my father said, ‘You need to listen to Charlie Parker or Coltrane’ and he’d play the real shit for me.

“When I would buy a record, it would be the serious players-Miroslav Vitous or Jaco Pastorius, and then George Duke, who turned me out in a totally different way.”

Howard left classical music when his teacher caught him playing jazz licks. “Mrs. Curtis told me to make a choice, and I couldn’t relate to composers who were dead 400 or 500 years, so she dropped me. One thing was funny: She heard me playing the bass line of Miles Davis’ “Bitches Brew” on bassoon and told me to quit playing Miles Davis. It tripped me out that she knew it was Miles Davis!”

Working in the ’70s as a sideman with various local soul groups, he then became a session player for fellow Philadelphians Leon Huff and Dexter Wansel. In 1979 he joined Grover Washington, Jr. on tour. That led to a solo career and eight years in Los Angeles before he moved to Atlanta six years ago.

Howard’s discography began with Asphalt Garden in 1982, followed by Stepping Out and the chart-hitting Dancing in the Sun. After Love Will Follow, MCA signed him for A Nice Place to Be, Reflections and Personal.

After GRP took over the contracts of many MCA artists in 1990, Howard had annual issues of Love And Understanding, Do I Ever Cross Your Mind?, When Summer Comes and A Home Far Away.

In 1996, Howard was going through a period of personal tragedy and struggle when his mother became ill and died, and his marriage ended in divorce. The musical result was Attitude Adjustment, an expression of the upheaval in his life. “It was one of the hardest years I ever had, and it was a great challenge to remain focused in the midst of it all. I was writing as I lived it, and that’s what made it so real. I wasn’t hiding anything.”

“I didn’t tour much last year because I had to make a choice-make dough or get in touch with my center, which is hard to do on a tour bus. But I have had an opportunity to heal and now I’m looking forward to working again. It’s time for me to move on. I’ve been out there a long time, and I am ready to roll.”

Me’Shell Ndege’Ocello’s Plantation Lullabies and Soul on Ice (Maverick) (“a poet with a whole lot to say.”)