Skip to content
Become a member and get exclusive access to articles, live sessions and more!
Start Your Free Trial
Home > JT Archives > Gene Ludwig: A B-3 Burner You Can Count On 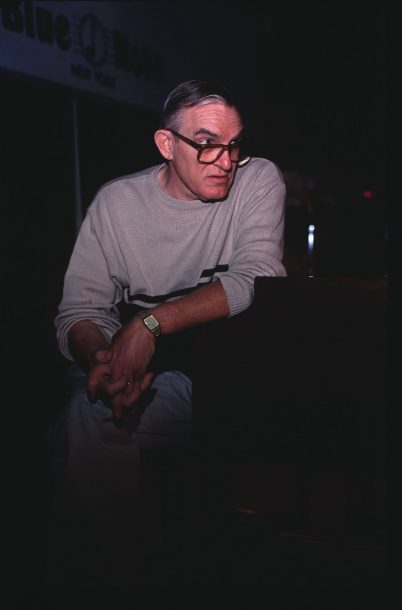 Off the bandstand, he hardly looks the part. The dress shirt and square-knotted tie, the neatly pressed slacks, wide-rimmed glasses and patriarchal demeanor suggest an upright, solid citizen-possibly a Midwestern high school principal or bank president.

And yet, when Gene Ludwig sits behind the hulking Hammond B-3 organ, he is instantly transformed. To witness this straitlaced 67-year-old white man wailing with such bluesy authority on Joe Henderson’s “Step Lightly” or laying down such a greasy groove on “One Mint Julep” is a momentarily disorienting experience. The juxtaposition of image and sound presents a befuddling dichotomy: High school principals and bank presidents aren’t supposed to be this baaaad.

Perhaps Ludwig’s genial demeanor and conservative attire has gotten in the way of him becoming as widely recognized and regularly recorded as some of his organ-playing colleagues. From a purely musical standpoint, he is certainly on par with the best of the bona fide B-3 burners and has been for over four decades. And yet, the Pittsburgh native had been overlooked for session work and largely ignored by the labels over the past 30 years.

“It’s the old story of ‘out of sight, out of mind,'” says renowned producer, soul-jazz expert and B-3 maven Bob Porter. “That’s a rule for anybody who deals in jazz. If you don’t hear anything from a guy for a certain length of time, and there’s no opportunity to see him, how the hell are you supposed to stay up with him? I mean, no one’s giving you a round-trip plane ticket to Pittsburgh to go hear Gene Ludwig.”

Porter had worked with Ludwig back in 1969 on a Sonny Stitt recording he produced for Prestige. As he recalls, “Stitt worked trios in those years, most of the time with [organist] Don Patterson and [drummer] Billy James. But I went to see him at a joint in Montclair [New Jersey] called the Spearington House, and he had Gene with him on organ and Randy Gillespie on drums. And I just thought it sounded really good-more inspired than Stitt had been with Patterson, not to say that he and Patterson hadn’t inspired each other for long periods of time. But based on the last time I had heard them together, it was getting a little tired. And seeing him with Gene-it sounded terrific.”

Porter promptly booked the trio (plus guest guitarist Pat Martino) for the Prestige studio session that resulted in Night Letter. Following a year of roadwork with Stitt, Ludwig would return to Pittsburgh and during the ’70s hook up with singer Arthur Prysock for two separate stints-one from 1973 to ’74 and the other from 1978 to ’79. The organist recorded his first session as a leader in 1980 for Muse (Now’s the Time with local Pittsburghers George Green on tenor sax, Kwasi Jayourba on percussion, Tom Soisson on drums and Larry McGee on guitar) but by and large remained “out of sight, out of mind” in Pittsburgh. Nevertheless, his reputation flourished through the ’80s and ’90s.

“I’ve always relied on a loose-knit network of guys who get around and see different organ players, and word usually gets back to me,” says Porter. “And everything that ever came back about Gene Ludwig was always positive. And I wasn’t really surprised because I figured he was good enough to probably work around Pittsburgh and not have to travel. And sometimes that makes a difference. To a certain extent if you are a local musician, you’re either so good that you’re always working or you’re not good enough to travel. There’s no real middle ground. And Gene is just one of these guys who is so good, and his reputation is so strong around Pittsburgh, that he really didn’t have to come out that much. I’m sure he didn’t [leave Pittsburgh] all that frequently.”

In recent years, Ludwig has been mounting something of a comeback, at least in terms of visibility beyond his own hometown turf of Pittsburgh. In 1997, Joe Morabia of Blues Leaf signed the underrecognized B-3 veteran to a deal that saw the release of his Back on the Track that year. It sold well enough to merit a follow-up, 2000’s Soul Serenade, which led to appearances in the New York and New Jersey area. Ludwig’s most recent release, 2002’s The Groove ORGANization, has been garnering substantial radio play in that same East Coast market. Jack Kriesberg, who books talent for the Blue Note nightclub in New York, brought Ludwig to Morabia’s attention and ultimately served as producer of those sessions for Blues Leaf: “I wanted to get him a little more visibility and exposure, as a friend and as someone who appreciates his talent,” he says. “The combination of his technique and his timing and his soulfulness is what got me about Gene. He’s not about showing off his chops as opposed to just dealing with the music. A lot of people are into that attitude of, ‘Look, I can play all these notes.’ But Gene is not that much concerned about that. He’s more concerned with the groove and the feel of the music and whatever it takes to enhance that. And he knows how to lay back, which a lot of people don’t do. Of the organ players who were around, I didn’t see anybody, outside Joey DeFrancesco, who was of that kind of caliber and who really understood the instrument as much as he does.”

Porter, who had been hip to Ludwig’s singular talent for some 30 years, ended up calling on the organist once again for a Plas Johnson/Red Holloway session he produced in 2001 for Milestone entitled Keep That Groove Going! As he recalls, “A few years ago at one of the Newark Organ jams, Gene came down and just smoked the place out. Nobody even came close, and Jimmy McGriff was on the bill that day! And you know, I was very, very impressed. It kind of reaffirmed everything I had been hearing from other people about how great Gene was sounding. The Pittsburgh guys always raved about him and I filed it away as a mental note. And when I got a chance to hear him at the organ jam, [I realized] they were right. So I brought Gene in on that session with Plas and Red, which also had Kenny Washington on drums and Melvin Sparks on guitar. Gene came in and worked with four guys he had never played with before but he was ready and he was prepared. They couldn’t throw anything at him that he couldn’t handle, which was really wonderful. That’s what you want in a sideman. I think his own solos were terrific and his accompaniment was fine. I was very happy with how he played on that session.”

Porter regards Ludwig as a consummate pro. As he put it, “Gene is, in my estimation, a real jazz organ player from the old school. He puts it right down the middle. And for my money, he’s playing better now than ever.”

To hear the Ludwig today conjuring up soulful, rib-and-greens-eating anthems on the bandstand is to experience one of the masters of ‘the Beast’ at the top of his game. A natural blues and bop player, his nimble right-hand flights are expertly anchored by some of the most solidly insistent grooves in the business. Adept at the long-lost art of bass pedals, Ludwig often doubles the low end with left-hand bass lines to fatten the groove while remaining purely liberated with his right-hand flourishes.

Accompanied on The Groove ORGANization by guitarist Bob DeVos, a sideman for such legendary B-3 burners as Charles “The Mighty Burner” Earland and Richard “Groove” Holmes, and the great drummer Billy James, whose loose, flexible shuffle beat made him the drummer of choice during the ’60s for the likes of organist Don Patterson and saxophonists Booker Ervin, Gene Ammons, Sonny Stitt, Eddie “Lockjaw” Davis and Houston Person, Ludwig wails with impunity on such soulful vehicles as Stanley Turrentine’s “Sugar,” Miles Davis’ “All Blues” and Tyrone Smith’s “Chitlins Con Carne.” He burns through Charlie Parker’s “Billie’s Bounce” and swings briskly through a jaunty reading of the Jule Styne/Sammy Cahn standard “It’s You or No One.” And on lush ballads like Duke Ellington’s “Mood Indigo” or the standard “You’ve Changed,” he ladles on rich timbres and thick chordal voicings to set a dramatic and appropriately melancholy mood.