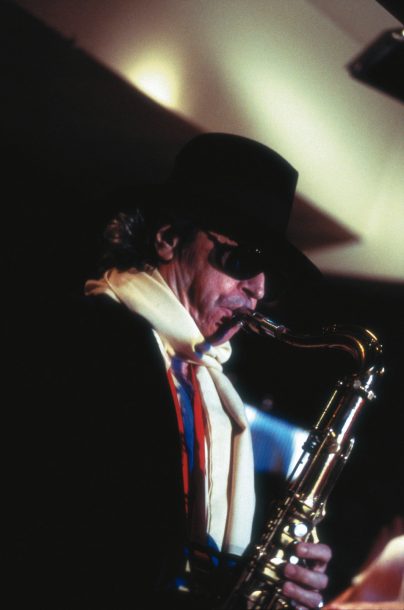 My Gato Barbieri Moment:… One cold, rainy, fall night two years ago, I went to S.O.B.s to catch a Philippe Saisse gig. Inside, a friend told me that Gato was in the house. Squinting in the nicotine haze, I soon spotted The Hat slowly tilted back, revealing double-x frame specs poised atop a Gary Cooperesque profile… smoke floating from his cigarette in element, wraith-like filigrees. Gato Barbieri was chill. I paid my respects, he smiled, thanked me and shook my hand. I walked away, anointed.

Where have all the jazz gods gone? You know, the old school bloods like Monk, Miles, Ornette-vital, inimitable icons of mad skills, deep music and crazy style (save for Rodney Kendrick, Branford and a few others, the new crew is pretty much three-dimensional). Gato Barbieri looms large over today’s musicscape because he straddles both the old and the new school with a sound so preternaturally visceral, so emotionally raw that it simply transcends rhythm and time.

Throughout a three decades-long career that can only be described as richly prolific-records with Don Cherry, Carla Bley and Charlie Haden, vibrant film soundtracks (most notably Last Tango in Paris, for which he won a Grammy), over 30 recordings as a leader (including his acclaimed Chapter series; four groundbreaking experiments in South/North America rhythms), standard-setting contempo jazz recordings, countless globe-hopping concert dates-Barbieri has never stood still, never dwelled on past achievements. “I don’t want to be hung on the same things,” laughs Gato. “I don’t like to make a record and have it in the closet, so I make so many changes in so many years-Impulse!, another change, A&M, another change now. Let’s talk more about the future.” An ironic statement considering that just three years ago, Gato Barbieri’s future was as dark as death.

In 1994, Michele, Gato’s wife of 35 years was diagnosed with a degenerative disease. For the first time in his career, the saxophonist put down his horn and walked away from the world. “I didn’t want to make any music,” he says with a tinge of sadness. At home, he transferred all the fire and tenderness of his music into nursing his sick wife. Sometimes in our darkest hour, a light appears to show us the way to the next door…in Gato'”s case, it was the opportune flashlight of Philippe Saisse.

“My best friend Robbie Gonzales plays drums with Gato,” recalls Saisse. “Robbie organized the meeting, it was like a staring contest, nothing was said.” Undaunted, Saisse, a fan of Barbieri’s since way back in his Paris teen years, simply had to record the man. “I knew he was a genius, that Gato’s sound would fit with what I had in mind,” says the keyboardist. “He had the most original sound like Sanborn, Brecker, Miles, he plays one note and no-one in the world sounds like, him.” Finally, “one day I saw him playing at S.O.B.s and he seemed glad to see me. That broke the ice-I had proven I was interested.”

Pre-production for the sessions that would create Que Pasa (Barbieri’s first new recording since ’85s Apasionado) began rockily in the early days of 1995. “It was a very long process because his wife was very tired at the time and he wasn’t comfortable with the way I work with computers and drum machines,” says Saisse. “The first thing he wanted to do was ‘Granada’ (“It is dedicated to the bullfight, I visualize a fight between a man and a toro, a feeling of push and melody,” Gato opines)-then we did ‘Circulos’-then Michele died in February.”

Trying to play himself out of his state of grief, Gato once again took to the road. In March, while onstage at D.C.’s Blues Alley, Gato suddenly felt “very bad.” After the first set, he checked himself into the hospital, was diagnosed and immediately rushed to surgery for a triple bypass!! Like his namesake, Barbieri cheated Senor Death, trading up to a newer, stronger life. “I am like a cat, really,” he muses. “We have to live and die with nobody’s help. The young people don’t have courage, but still you have to have some courage and make something different, or you can lose you.” Remarkably, by May of ’95, he was back on the block and itching to record again.

Back in Philippe’s MIDI-factory, Gato seized the time like a Black Panther on a mission. The first song they recorded was Saisse’s “Mystica,” a tune loosely based on Erik Satie’s sublime “Gymnopedie No. 3.” “The intro was the feeling of Satie, who I like,” says Barbieri. “I don’t like to play a straight tune so I make another melody, I make it beautiful. It’s a one-take tune.”

“Mystica” proved to be the Que Pasa sessions’ breakthrough. Once that was in the can, Saisse found to his delight that Gato “finally got the hang of the computer, it made him really focus, solid like a rock. He was grooving, adding stuff-‘we need cowbell, we need colors.’ He actually came up with the gamelan loop for his tune “Indonesia;” he brought the sample, I used the Akai S-1000 sampler and looped it. Basically, he’s a one-take guy-he puts down the headphones-puts the sax down-lights a cigarette and says, ‘That’s it.'”

The marvel at the heart of Que Pasa is that Gato sound-big music as bracingly wide-open as the pampas of his native Argentina yet as passionately intimate as a candlelit boudoir. “I am a Romanticist, angry, love, beautiful, all the components of our life,” declared El Gato. “When I play I am always thinking about sound, work on the sound, not the technique; when I can’t express what I want with the sax, I sing.” Make no mistake, there will never be enough ways to skin this Gato.

“‘I have two or three Yamahas, two Selmers; one is 30 years old. I mix the body of a Conn with the neck of a Selmer-Selmer/Conn, Selmer/Yamaha. My mouthpiece is always La Voz, with #1 reeds. If I blow with everything soft, I press my diaphragm and my throat, never press the mouthpiece. Not everyone can play my saxophone, it’s too soft.”