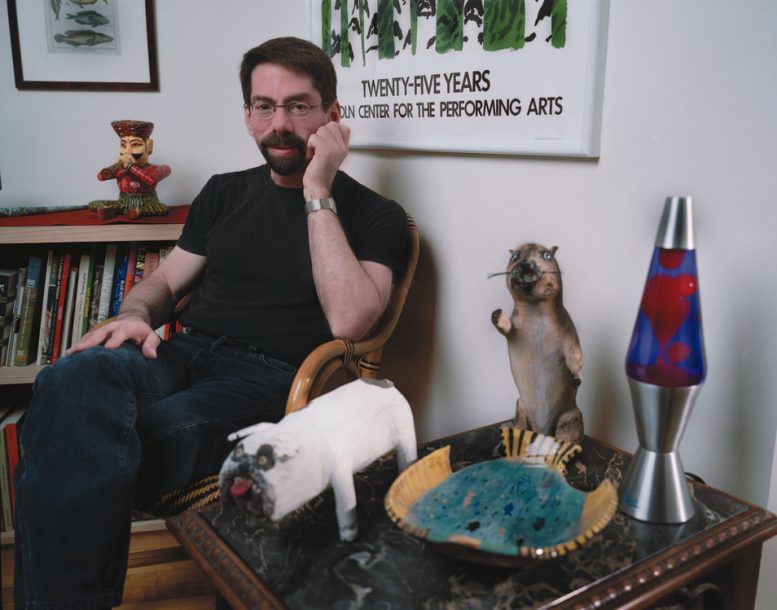 My neighborhood is the epicenter of the shopping mall,” Fred Hersch laments. He is referring to SoHo-specifically Broadway between Prince and Spring Streets, one of New York’s most congested thoroughfares. “The weekends here are frankly atrocious,” adds the pianist, bracing himself for another holiday season in lower Manhattan.

“When I moved here 25 years ago,” Hersch says, “there were artists and galleries, all kinds of eccentric shops. Now it’s Victoria’s Secret and Zales and Eddie Bauer and Crate & Barrel. A block down the street, Bloomingdale’s is opening where Canal Jean Co. used to be.” But Hersch’s gorgeous, meticulously appointed loft, which he will soon be sharing with his partner Scott, provides a sanctuary-and a rent-stabilized one at that.

Their place is decorated with, among other things, molas, “which are embroidered fabric pieces done by the Cuna Indians, who live off the coast of South America,” Hersch says. “Women and girls make these things and sew them into their bodices. After they wear them for a while they rip them out and sell them. I also have these animal statuettes by a Santa Fe woodcarver named Miguel Rodriguez. All these things have a personality. I’ve learned over the years that if you see something you really like, you should get it.”

Hersch ran Classic Sound Studios here from 1983 to 1988. His office is a former drum booth. His bedroom, painted a deep, mellow shade of purple and enclosed on two sides by black curtains, used to be the control room. On a raised perch in the living room sits an 1896 Steinway, outfitted with a fairly elaborate humidifier/dehumidifier system. “I’m kind of nutty about it,” Hersch admits.

It was Hersch himself who picked out a new Steinway for the Jazz Standard, just in time for his weeklong duo residency at the club in early December 2003. The series boasted a different pairing every night, beginning with Lee Konitz, wrapping up with Kurt Elling, and also including John Hollenbeck, Jane Ira Bloom, Kate McGarry and Joe Lovano. Hersch’s third Palmetto disc, Fred Hersch+2, is due out this March, and more large-scale compositions will follow in the wake of the recent premiere of his Walt Whitman-inspired “Leaves of Grass.”

“I got a Guggenheim Fellowship this year, so I’m writing more,” says Hersch. “I’m set up for Sibelius notation software, but quite honestly I haven’t gotten into it yet. I’ve written my whole life with a pencil, my manuscript is really good, and it’s just a lot faster right now. But I’m sure over the next year or so I’ll start using the software to cut and paste things and extract parts.”

Hersch was diagnosed as HIV-positive at age 30, and although his health remains very much a concern, he is able to carry on as normal. “I take my pills, see my doctor every couple of months, and cross my fingers that they keep coming up with new drugs,” he says. “I’ve been surviving with this for 16 or 17 years now, and I did have a pretty bad patch five or six years ago where I was hospitalized. But that was a blip. I continue to raise lots of money by doing benefit projects and keeping the awareness up.”

A typical year finds Hersch playing roughly 60 to 80 gigs. “I don’t do a lot of bust-your-hump one-nighters through Europe. It’s something I don’t enjoy. As a sideman I did the heavy road stuff, but now I try to pick my spots.”

Although Hersch has no intention of giving up his loft, he and Scott are building a second home in Pike County, Penn. “I’ll have a chance to, you know, play the piano and look at a tree,” he laughs. “I’ve been very lucky in that I’ve been going up to the MacDowell Colony in New Hampshire the last four winters. Having a studio in the woods with that level of quiet, being able to go outside and smell the air- that’s very important to me. I’m 48, and I’ve been in New York 27 years. I need to have a consistent escape.”

“I love my vinyl. I’ve had some of it since I was a kid. But sometimes I’ll duplicate what I have on CD so I can put it on my iPod and take it to the gym. I’m pretty proud of my Earthworks speakers; they’re really accurate but very musical. I use Earthworks microphones too-actually, I endorse them. The stereo is mostly Adcom gear, and I have routing boxes so I can record from LP to CD or DAT to whatever. All these pieces of gear talk to each other.”

“I rarely travel for pleasure, but a few years ago I went to a little Caribbean island called Saba. I learned how to scuba, which was one of the great experiences of my life.”

“I make pretty mean crab cakes and something I call Chicken Fred, which is baked chicken with a pretty cool mushroom sauce. I’ve also gotten over my fear of cooking fish. But we enjoy going out too-this is New York. On the road food becomes really important because travel is so hellish. When you have a chance to eat well, you have to take advantage.”

“If I could play duos with three people, they’d be Wayne Shorter, Jack DeJohnette and Sonny Rollins. I also wouldn’t complain about playing with Dave Holland. Billy Higgins and I almost played together about six times and never did, and that’s sad. But then again, I got to play with Ed Blackwell.”