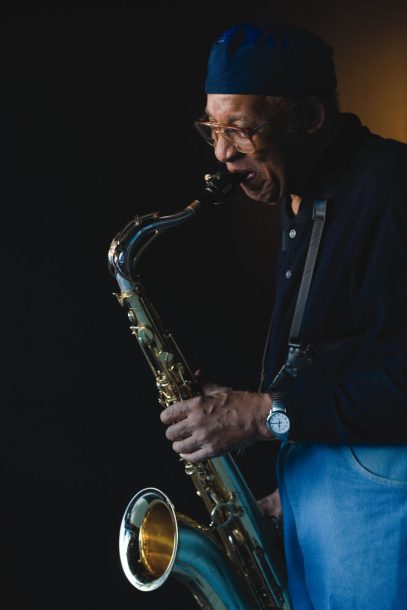 Chicago-based tenor saxophonist Fred Anderson was already an underground legend in 1982 when he bought Tip’s Tavern, a small neighborhood bar on Indiana Avenue that he’d been running for several years, and rechristened it the Velvet Lounge. A founding member of the Association for the Advancement of Creative Musicians (AACM) in the ’60s, Anderson was an important (but, at the time, mostly unheralded) figure in the evolution of what became known as “free jazz”-something of a misnomer, as Anderson emphasizes, because it takes at least as much discipline to create coherent music without a template as it does to improvise from a written score.

Inspired by Bird and schooled in Chicago’s brawny “tough tenor” tradition (think Gene Ammons), Anderson expanded on his mentors’ vision. Not content to merely improvise on tunes, he began to develop the style he’s known for today, in which he mines chord structures-of melodies, riffs or spontaneously created patterns-for improvisational ideas. These ideas then imply new harmonic and rhythmic textures which, in turn, fuel yet another series of variations. The result is a densely concentric interweaving, endlessly shifting yet still grounded-albeit often loosely-in the original framework laid down by Anderson and his collaborators.

In other words, Anderson has throughout his life been guided by a muse that goads him into searching for new and uncharted terrain, all in the name of finding fresh paths that will return him home-even if that “home” has become a very different place by the time he gets back to it. It’s an apt analogy for the history of his club, as well.

Despite his experience in overseeing performance venues (his Bird House on Lincoln Avenue was a short-lived but influential free-jazz outlet in the ’70s), Anderson did not initially envision the Velvet as a music room. But in the late ’80s, after having run the place as a neighborhood bar for a few years, he began to book jam sessions there on alternating Sunday nights. He began featuring music on weekends on a regular basis about five years later. Under his direction, this unpretentious urban juke-with its battered bar and precariously dangling chandeliers, its atmospheric meld of artistic earnestness, funky good times and spiritual uplift, and its steady lineup of world-class musicians, many of whom were drawn from the AACM-rapidly became more than just a local venue. When the late Steve Lacy dropped by one time, he wrote, “This place is a temple!” on a photo of himself and gave it to Anderson to put on the wall. It was a sentiment that seemed almost universal among both patrons and artists.

That’s why it sent shockwaves through Chicago’s music community about two years ago when the news went public that the Velvet was going to have to close its doors. In a nearly unprecedented show of loyalty and concern, jazz and arts lovers throughout the city-and, eventually, around the world-began to donate money to help the beloved little establishment find a new home. In less than a year, over $100,000, almost all of it in small amounts donated by individuals, had made it possible for Anderson to commit himself to moving his club and keeping the music alive. Until the very end, though, Anderson wasn’t sure exactly when he was going to have to move. “Isaiah Spencer and [his band] were playing [one] night,” he remembers, “and the ceiling fell down after we left. Isaiah left his drums because he was going to play in the jam session on the next day, which would have been on a Sunday. The ceiling fell down all around his drums; it didn’t hit his drums. Evidently somebody had their arms around us. So I said, ‘This is it. It’s time for us to go.’ We got out just in time.”

The new Velvet, at 67 E. Cermak Road, opened a few months later, in the summer of 2006, and within a few weeks a lot of the old regulars had already begun to return. Their initial impression was usually a bracing meld of delight and déjà vu. The club’s roomy and uncluttered feel, state-of-the-art sound and lighting systems, and crisp acoustics made it seem very different, at least physically, from the gritty little establishment on Indiana.

But the spirit was, and remains, unmistakably the same. Along with his work as the proprietor of the Velvet, Anderson, now 78, remains active as both a performer and a recording artist. Many of his recent releases, including last year’s Timeless (Delmark) with percussionist Hamid Drake and bassist Harrison Bankhead, were recorded live at his club; his most recent CD, From the River to the Ocean (Thrill Jockey), was a studio collaboration with Drake and a shifting ensemble consisting of artists who regularly perform with groups at the Velvet.

It’s no accident that his accompanists on this latest disc are quite a few years younger than he-Anderson’s role as mentor to several generations of Chicago musicians is as important a part of his legacy as his own recordings, performances and ongoing work as a nightclub proprietor. The jam sessions there, currently hosted by Spencer every Sunday evening, represent one of the few opportunities left for serious local musicians to hone their chops in a challenging yet supportive performance setting. Young artists such as bassist Junius Paul and trumpeters Corey Wilkes and Maurice Brown, among others, cut their teeth at the Velvet jams; some return on Sundays to help keep the legacy alive.

“I don’t look at [my role] as being a club owner,” Anderson attests. “My main thing is thinking about the music, and making sure the musicians are happy and enjoy playing. If they enjoy playing, they can make the people come in and enjoy them. I’m running this as a musician and a person who loves music. I just sit back and let ’em do what they do, and treat ’em with respect. They know they can be here and play and express themselves. They don’t have to worry about somebody telling them how to play. This is the freedom that people have here. We come here, we don’t judge. This is what this place is for.”