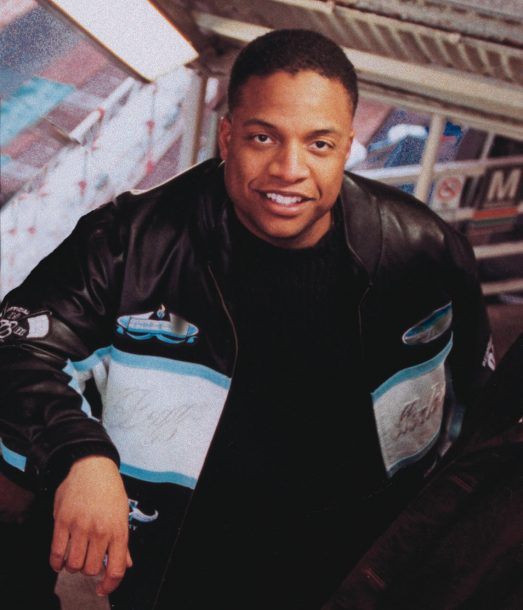 Producer, and songwriter Frayne Lewis plays the bass guitar. But if listeners expect a bass-centered instrumental experience on his debut album, Frayne (OmTown), they’ve got another thing coming. “At home, yeah, I’ll play bass all day, but for a whole album’s worth? I don’t know,” says Lewis. “I know Stanley Clarke and a whole lot of people do that, but for me and the kind of music I produce, I wanted a broader scope. I wanted to reach more people.”

Lewis is interested in making music that fills in the gaps between smooth jazz, classic R&B and hip-hop, and he does so with the new band-also named Frayne-which includes his brother Bobby Lewis on drums and vocals, lead vocalist Cristina Sanchez and Urban Knights regulars Kevin Randolph on keys, Eric Jackson on guitar and DJ Stereo, who also plays keys. It’s an ambitious, wide-ranging concept that might surprise some who’ve been following the 35-year-old’s career.

As the son of pianist Ramsey Lewis, Frayne has spent his whole life in the Chicago music scene. He began playing bass as a teenager and soon graduated to playing jazz trio dates in clubs around the Windy City with brother Bobby and buddy Randolph. As a twentysomething music-head who’d been in dozens of studio sessions with his dad-producing tracks for Ramsey albums like 1992’s Ivory Pyramid and 1995’s Between The Keys-and hanging out with longtime family friend Maurice White of Earth Wind & Fire, Frayne was primed for bigger things. In 1997, he began producing sessions for his father’s pet project, contemporary jazz group Urban Knights, working on four of that outfit’s five releases. So when word came that Frayne had signed to the OmTown/Higher Octave division of Narada, industry watchers may have expected a fair injection of jazz spirit.

While Frayne does use the jazz idiom as a brick in its foundation, the structure is decidedly contemporary R&B. Staking out his part in the ‘tween generation that loves vintage soul and nascent hip-hop as much as it was inspired by classic jazz riffs, Lewis is taken aback by any preconceived notions about the jazz content of his latest project.

“It’s more like Lucy Pearl,” says Lewis of the new CD, citing the urban contemporary trio headed by producer Raphael Saadiq that folded in 2001 after two albums. “Earth Wind & Fire did it also, and they were ahead of their time. It was a way to bridge the generation gap. There’s a huge gap between the jazz fan, the classic R&B fan and the hip-hop fan.” Citing influences from Stevie Wonder to the Isley Brothers to the mighty Earth Wind & Fire, Lewis is only interested in creating timeless music with a broad appeal. “Frayne is just good music,” he says. “It has a touch of hip-hop but it’s just good R&B music.”

Lewis and various band members contributed all the original material for the set, underscoring the fact that despite its name, Frayne is a partnership between all the members. “We wanted to do songs that really fit this group,” he says. “Even the songs I had done with vocals a long time ago, we didn’t include them because this group is really a different group than anything I’ve ever done. And it is a group, I have to really express that. It isn’t just Frayne.”

Frayne includes uptempo old-school jams like “Weekend,” “Aphrodisiac” and “Bump That,” but there are also topical R&B tunes like the domestic violence lament “There Is Nothing Left,” the soaring gospel-based tune “Trying Times” and a duet between Bobby and Sanchez on the Isley Brothers’ classic “For the Love of You.” While most tunes feature vocals, there are instrumental moments as well, as when Lewis lets his bass do the talking on the neosoul groove “Frayne’s Soul Lounge” and the smooth jazz radio-friendly cover of Shalamar’s 1982 hit “A Night to Remember.”

And no, the band’s contemporary direction is not Lewis’ way of getting out from the large shadow cast by Papa Ramsey. In fact, notes Lewis, making music with a contemporary touch is exactly what his father did during his “In Crowd” incarnation as a pop hit-maker. “They called him a pop musician also because he wasn’t doing straightahead,” Lewis says. “He was bridging the gap with ‘Wade in the Water’ and ‘The In Crowd,’ so I don’t think I’m doing that much of a different thing.”