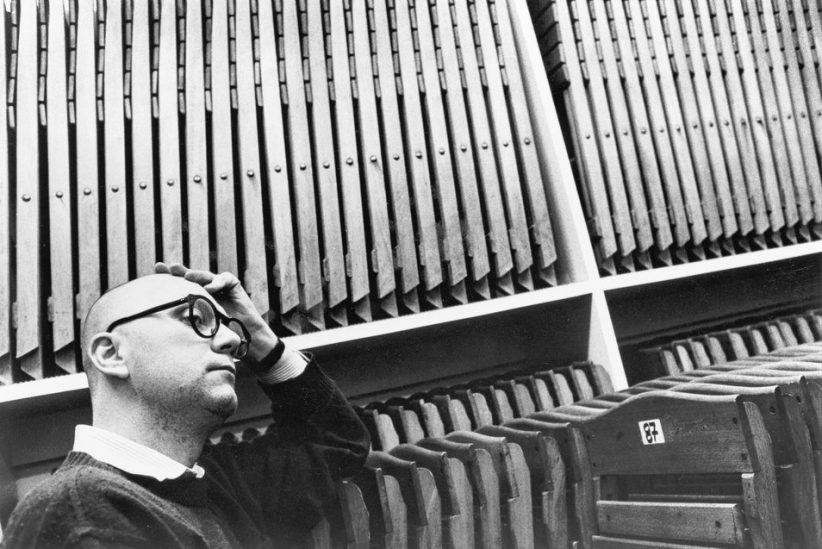 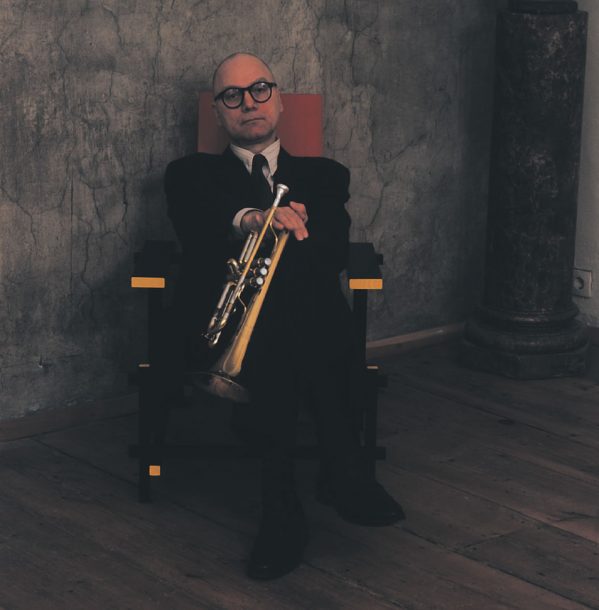 Franz Koglmann personifies Viennese cool. His shaved pate caps a reserved expression; the cor-ners of his mouth turn downward just short of a frown; black, thick-rimmed glasses frame quietly intense eyes. His is a countenance shaped not so much by the wear of time, but by the gravity of ideas. He usually speaks in a matter-of-fact tone, conveying authority without bothering with pedantry. But hours after wrapping his first New York recording session, Koglmann bordered on the buoyant.

“I love the aggression of New York,” exudes the composer-trumpeter-flugelhornist. “It makes Vienna seem like a museum. It is the perfect city to record a project that has pieces about architecture and music from a play in which a boy grows breasts.”

Though Koglmann’s erudite compositions have a New York tinge on the resulting album, Venus in Transit, Koglmann’s fourth CD for Between the Lines (the Frankfurt-based label for which he also serves as artistic director), the arch European sensibility he has refined since the early ’70s is far from obscured. Initially triggered by Goethe’s observation that “architecture is benumbed music,” Koglmann’s initial homage to architects Steve Koenig and Rem Koolhaas argued the inverse: music is kinetic architecture. The intended scope of the project changed when Koglmann was engaged by director Beverly Blankenship to write music for the erotically charged “Vivace.” With the addition of this material, including arrangements of such Marilyn Monroe-associated songs as “Some Like It Hot,” Venus in Transit became a ménage à trois between music, architecture and theater (in fact, German speakers may become flush from the pornographic text of the aria sung by Wolfram Igor Derntl).

Consulting with Peter Herbert, the Austrian, New York-based bassist also featured on Koglmann’s first two Between the Lines CDs-Make Believe and An Affair With Strauss-Koglmann culled the downtown scene to assemble a distinctively configured chamber jazz ensemble for the date, ultimately enlisting violist Mat Maneri, reed player Chris Speed, guitarist David Fiuczynski, bassoonist Mike Rabinowitz and percussionist John Mettam. There are several similarities between this ensemble and those Koglmann has led in Europe: both Speed and Koglmann’s Monoblue Quartet’s Tony Coe smolder on tenor and clarinet; Fiuczynski serves up jarring textures like Monoblue’s Burkhard Stangl; and Rabinowitz takes on the double reed chores so ably handled by oboe player Mario Arcari in the late ’80s and early ’90s. Still, Koglmann’s New York gang leave their mark on his program, which the composer estimates to be 70% notated. The Americans are impressively adroit in handling Koglmann’s Cool and Silver Age contours. More importantly, they prove to be attuned to Koglmann’s use of urbane elegance as a trap door to sensuousness and melancholy. Still, because an estimated 30% of the program is left open to improvisation, their American identities move to the foreground to create intriguing contrasts.

Koglmann compared his colleagues’ efforts to his own when he sat in with Archie Shepp during a New York visit in the early ’70s. “Here I was in New York, playing New York jazz, but I still sounded Viennese,” he recalls, “so it is not surprising that they sound American, even when they are playing Viennese jazz. But this is what I wanted: a combination of New York energy and Viennese cool.”

Cool. For most jazz fans, the word is personified by late ’40s, early ’50s Miles, Chet Baker and other American stylists. For Koglmann, cool is a sensibility that extends far beyond American jazz, one that has always been paramount in his playing and writing, even on his mid-’70s recordings with October Revolutionary Bill Dixon and Steve Lacy (recently reissued on Between the Lines as Opium). Cool, according to Koglmann, is a melding of precision and plasticity that is as palpable in Schubert’s “Winterreise” as it is in a Gil Evans chart. Expressed through jazz, cool intrinsically swings, but it “should tickle the brain not the feet.” Koglmann’s music frequently tickles the brain whether he is considering his Viennese roots on An Affair With Strauss or examining Ellington through a chamber jazz lens on We Thought About Duke (one of Koglmann’s hatHUT CDs that are trickling out of circulation).

Occasionally, however, Koglmann’s music poses profound intellectual challenges. His most disturbing recording to date is the newly issued O Moon My Pin-Up (hatOLOGY), a 1997 cantata based on Ezra Pound’s The Pisan Cantos, which were written when the notorious poet was caged in the waning months of World War II for collaborating with Mussolini’s regime via his fascist speeches on Italian radio. Employing prickly Viennese modernism, Koglmann’s score for octet (which includes sterling improvisers like Coe and bassist Barre Phillips), eight-person chorus and solo voice is thoroughly harrowing. Singer Phil Minton’s portrayal of Pound, a genius undone by anti-Semitism and a fixation with fascism, who spewed doggerel one moment and sang transcendent verse the next, is a tour de force. Yet Koglmann refrains from judging Pound-a denial of resolution that intensifies and complicates the listening experience.

The contrasts of pleasure and intellectual rigor within Koglmann’s music carry over to his stewardship of Between the Lines. By the end of 2001, 16 titles will have been issued, but only a few are by American artists with appreciable domestic name recognition. Most of the projects are led by non-Americans who have had little to no exposure in the U.S. jazz press (arguably, pianist Ran Blake, whose collaboration with trumpeter Enrico Rava Duo en Noir was an early Between the Lines release, is the most discussed artist on the roster). Subsequently, there are absorbing discoveries with each new batch of releases, ranging from British American Blue, Coe’s free improvisations with pianist Roger Kellaway, to Tin Drum Stories, guitarist Andreas Willers’ intriguing take on the monumental Günter Grass novel. Still, Koglmann cautions that the label does not merely mirror his own tastes.

“Of course, my own aesthetic as a composer and a player has influenced my work with BTL,” Koglmann concedes, “but it is not the only factor in my decisions as artistic director. Art is not exclusively a question of personal taste. It has to do with recognizing specific developments; that projects are necessary for production for different reasons. A collector of art will probably not only follow his taste but also see the necessity of following a greater coherence.

“On the other hand I cannot deny that I have a preference for a specific kind of nervousness, sensual, elegant refinement, maybe a kind of decadence, in music,” Koglmann elaborates. “I am not a friend of unrestrained extrovertism, noisy rants and the terrorism of improvisation. I prefer the thoughtful work of people who are writing music-not only in the classical-contemporary area, but in jazz as well.

“But I also have to be consistent in my decisions with the name of the label-Between the Lines,” Koglmann qualifies. “It is close to the third-stream concept, but in my position as artistic director, I am discovering that younger musicians are creating interesting music between jazz and other types of music, just not classical, and sometimes they do not use jazz at all.

“I have realized through these discoveries that it is a disadvantage being a working composer and musician in this job, because you usually do not spend so much time listening to others when you are working so intensely on your own music,” Koglmann reflects. “So, I have to learn a lot about musicians and composers and the scenes they are in-especially young musicians and composers-not only to understand their aesthetics, but to see how they are similar or different from other musicians and composers.”

Koglmann singles out the musicians on Venus in Transit to make his point. “Mat Maneri’s work with microtonality and Chris Speed’s work with Eastern music are very important developments,” Koglmann emphasizes, “and they were not known 10 years ago. They are working between types of music that were not considered by Gunther Schuller when he created the third-stream concept. There are many new lines to be between.”

Ultimately, Koglmann’s mission in documenting music between the lines is to connect the dots between audiences of different music. “Each type of good music creates connoisseurs,” Koglmann states with conviction.

“Connoisseurs are not limited in their thinking. If they have a way to discover other forms of music, they will listen. I think this is the best way for projects like the duo of Enrico Rava and Ran Blake to live. In this way, I hope, this circle of connoisseurs will become bigger and bigger.”

Art Farmer: Out of the Past (GRP)

Chet Baker: It Could Happen to You (Riverside)