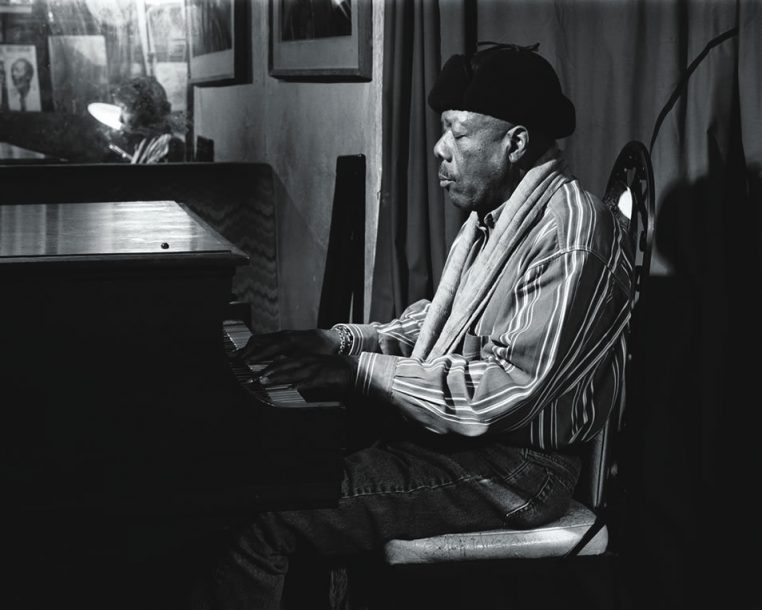 He died of pancreatic cancer, possibly compounded by untreated lymphoma, on September 5, 2002. At the time of his death Frank Hewitt was 66 years old and, in practical terms, homeless. In his final years, he had often slept in a stripped-out walk-in refrigerator in the back of Smalls, the Greenwich Village after-hours jazz club where he had played piano two or three nights a week for nine years. At the time of his death he had no known living relatives, and no recordings under his own name had ever been released.

Here the story would end were it not for Luke Kaven. While participating in a graduate internship program at Rutgers University in New Brunswick, N.J., Kaven got hooked on Smalls, with its all-night sessions, close community and culture of openness. He decided to start a record label to document the Smalls scene and focus on the player who was acknowledged as its master-Frank Hewitt.

Kaven recorded the material for We Loved You and Not Afraid to Live (Smalls) in 2001 and 2002, and he has enough unreleased material for approximately five more discs. Those who discover the pianist for the first time through these piano trio recordings-which is to say, almost everyone who hears them-will be shocked, delighted and baffled. Hewitt’s incandescent creativity and style sounds inevitable, a logical and necessary extension of the work of his three great predecessors: Thelonious Monk (in Hewitt’s clanking left-hand dissonances and ferocious right-hand tremolos), Bud Powell (the speed, lucidity and hammering touch, and also his darkness) and especially Elmo Hope (in the density of ideas, irregular phrases, surprising accents, chord patterns and, again, his darkness).

Hewitt uses their jagged, often turbulent musical languages in the service of dramatic narrative. In his trills, ornaments and sweeping flourishes, a hard-won, unsentimental romanticism prevails. But unlike Monk, Powell and Hope, Hewitt was not a notable composer. His repertoire is the Great American Songbook and jazz standards, and his interpretative assaults on pieces like “Polka Dots and Moonbeams” and “Green Dolphin Street” are exhaustive and definitive.

So how could an artist of this importance-who did not die young, retained his creative powers to the end and lived and worked his entire life in the jazz capital of the world-remain so unknown in his lifetime?

In late March 2005, between sets at Smalls, three members of the band Across 7th Street share memories of Hewitt. Ari Roland, Hewitt’s bass player of choice, appears on the two Hewitt CDs, and his arco solos are like twisting filaments of bright song threaded through the pianist’s deep textures. “Frank used to say, ‘Every time you play, make it like it’s going to be your last time,'” Roland says. “Frank’s whole thing was, every single time, no matter who it was with-Louis Hayes, or Art Blakey, or the single worst drummer in the world at a jam session-he was going to play hard, as hard as he could. For Frank it was like, ‘This is what I do in my life. You may like it, you may not like it, but I’m going to give you exactly who I am, every single time.’ And man, the consistency was frightening.”

Alto/tenor saxophonist Chris Byars, who collaborated often with Hewitt at Smalls, says, “I don’t think there was anybody faster than Frank. Nobody on any instrument could take this guy.”

When pianist Sacha Perry started out he followed Hewitt around, getting to know him and his strong personality. “He was an intransigent man. To Frank, asking for a gig was like kissing ass, and he wasn’t going to kiss ass to any mortal,” Perry says.

Roland adds, “I believe it was a kind of perfect storm. There was Frank’s personality-very difficult and prideful. There was his alcoholism and drug addiction. Timing was also a factor. If he had come up in 1945, or even 1950, he might have had a better shot. But by the time Frank was fully formed, styles had changed. And of course, there was the music industry not wanting to hear anything real.”

On his way out the door for the next set, Roland remembers something else. “When Frank met young musicians who were complaining about the scene or whatever, he would always say, ‘Never stop. Never stop playing. I never stopped playing.’ Man, Frank had day jobs his whole life. But he always played hard, and he never stopped.”