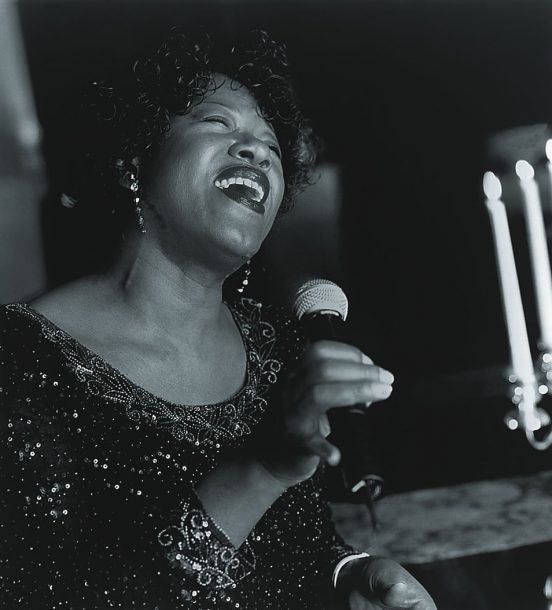 Francine Reed’s voice is velvet-smooth with a gritty edge that can be soothing or sassy, soulful or bawdy. “Music is in me, it is me,” declares the Atlanta resident. “I always say that when I was born, I came out singing ‘Look at me!'” and she croons the first line of “Misty.”

Growing up near Chicago in a financially wanting but musically rich family of seven children, she performed with her siblings for church and charity events, then in clubs. As a single parent with four children, Reed moved to Phoenix where she worked day jobs while singing in clubs at night. “But I never thought of leaving music, not once,” she says. “It’s totally impossible for me to think that way.”

Reed credits jazz influences of Carmen McRae (“her phrasing”), Ella Fitzgerald (“the way she scats”) and Nancy Wilson (“so smooth”). But after Reed heard B.B. King, she knew she wanted to sing the blues. “I just love songs that bite, blues that I can sink into,” she says.

One of those songs is “Wild Women,” which brought her international recognition during 13 years of touring with Lyle Lovett as the backup singer who goes out front for a solo spot. The song was on her first album and Lyle Lovett: Live in Texas.

On her newest CD, Shades of Blue on Platinum, Reed’s supple voice laments “The Man That Got Away,” struts through “I’m a Handful,” celebrates romance on “Beyond My Wildest Dreams” and swings hard on “I Got a Right to Sing the Blues,” a duet with sister Margo. Other family members performed on her first two albums, I Want You to Love Me and Can’t Make It on My Own, both recorded for Ichiban after Reed relocated to Atlanta.

Reed has logged two W.C. Handy nominations, and recorded with Delbert McClinton and Roy Orbison. Her voice is heard on TV commercials, including the “I Feel Good” theme of Senekot Laxative, and in the 1993 film The Firm via Tom Cruise’s disc player.