Skip to content
Become a member and get exclusive access to articles, live sessions and more!
Start Your Free Trial
Home > JT Archives > Fourplay in Michigan 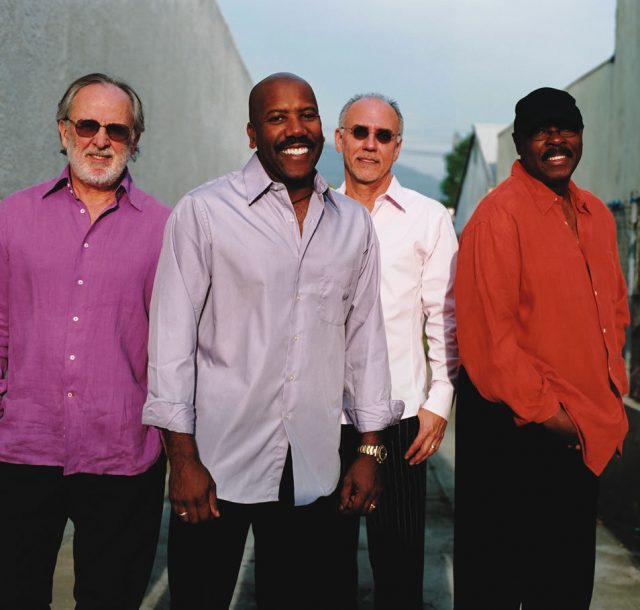 For nearly 20 years the band Fourplay has been, arguably, one of the leaders in the contemporary jazz/pop market. Their initial forays as a recording and performing unit included acclaimed session guitarist and instrumentalist Lee Ritenour. When Ritenour left to pursue other musical vistas the incomparable Larry Carlton was asked to join the fold. A little more than a decade later his presence has taken a recognized and established brand, as it were, and infused it with a fresh and palpable energy.

And so it is more than apropos that the quartet’s latest Heads Up release is, indeed, titled Energy. Carlton, along with senior members Bob James, Nathan East and Harvey Mason are a true tour de force and possess a simpatico that is free of ego roadblocks and boundaries and translates to an audience in a relaxed and unfettered manner.

The evening began with the ubiquitous and versatile East playing a solo six-string bass counterpointed melody and wordless vocal on the tune “Chant.” He single-handedly set the pace for the night with a strong groove that blossomed into a rousing Latin-inspired number featuring economical chord accompaniment from Carlton and spirited call and response interplay between James and East.

“Blues Force,” from their Yes, Please album, continued the festivities with a deceptively gentle and lilting reprieve, by way of James’ semi-classical acoustic piano intro. His dark and expressive improvisations quickly erupted into a strong and emphatic blues shuffle that sparked graceful and ebullient leads from Carlton. The tune itself shifted effortlessly from bop swing to mid-tempo rock, with James adding a more percussive approach to the mix as well as injecting some cool organ textures. They ended the manic fray with an abrupt surprise that resulted in the band playfully freeze-framing their body movements. It was a fun and titillating gimmick that elicited hearty glee from the crowd.

“Eastern Sky” was another original composition that spotlighted East’s vocalizing and koto-like melody lines on bass. The tune soon morphed into a brisk jazz swing, with burning piano by James and an insistent drive from Mason. ” Fortune Teller” and “Argentina,” both from the Energy disc, followed respectively as Carlton, first, showcased his best Wes Montgomery licks and percussionist Mason demonstrated amazing facility and style on the easy samba feel of the latter.

An early Fourplay classic, “101 Eastbound,” noticeably heightened audience attention and excitement, with East initially stepping into a lead role establishing guitar-like leads and counterpoint. The aggressive and incendiary solos that evolved from James in combination with joyful and buoyant improvisational filigree from East certainly drove home the image of a breezy “top-down” experience down that fabled freeway.

Next they drifted into the freeform improvisation of “Tally Ho,” which sparked an intense and remarkable solo by Mason. It was a star vehicle that displayed an impressive balance of tasteful restraint and an overall command of his kit.

Carlton slowed the pace with a reverent and gospel-tinged take on the perennial “Amazing Grace.” Mr. 335, as he is known, kept the classic melody simple and to the point utilizing trademark volume swells and subtly bended notes to make his statements.

The main set concluded with “Bali Run” as the band’s flowing and upbeat theme, in concert with James’ easy Bill Evans-like phrasing, ignited the crowd and brought the house down.

Carlton’s acoustic smooth and sunny “Smiles and Smiles to Go,” as well as James’ funky “Westchester Lady,” were brought back as encores and literally had the audience on their feet.

Fourplay is a seasoned outfit that visibly had a blast on stage. And, while there was no doubt of their strength as consummate improvisers and composers, their emphasis was clearly on total entertainment value for the people.