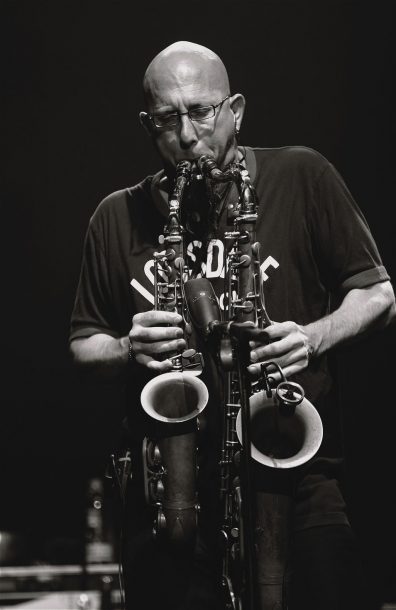 Saxophonist Jeff Coffin has recorded with his Mu’tet band every few years since joining Béla Fleck and the Flecktones in 1997, and arranged solo touring dates around that quartet’s schedule. Such was the plan this year after the release of his stellar new CD, Mutopia (Compass). Then, you could say, he got into a jam.

“LeRoi had a bad ATV accident,” Coffin says. “He’s thankfully expected to fully recover after breaking a lot of bones and puncturing a lung. I got the call on July 1, was onstage with them July 2, and I’ll be with them through October. I hope to tour in support of my new record after that. I had about 50 songs to chart out and learn with Dave and the guys on the fly, but it’s been fun.” (Ed. Note: Shortly before presstime, LeRoi Moore died in Los Angeles on Aug. 19 from sudden complications related to his accident.)

“Victor recommended Felix,” Coffin says. “And I hired him on Vic’s recommendation without ever hearing him play. He’s a young artistic force, and I hope this record gives people more of a chance to hear him play. If they’re expecting the next Jaco, that’s absurd. He can play his father’s stuff, but he really has his own voice.”

Coffin’s core quartet is rounded out by the Flecktones’ electric SynthAxe drummer, Future Man (Victor’s brother), who impressively switches to acoustic drums throughout, and the ever-versatile Kofi Burbridge, who provides the glue on piano, Hammond and Wurlitzer organs, and flute.

“Kofi is magical,” Coffin says. “People who’ve heard him play with the Derek Trucks Band will hear him in a way they never have before here. It’s the same thing with Roy, who sounds stunning on this record. People who see him play his electric ‘drumitar’ ask me, ‘Can he really play the drums?’ And I say, ‘Of course he can. Where do you think all of that stuff he does comes from?'”

The Massachusetts-born Coffin, 43, studied music at the University of North Texas. Upon graduation in 1991, he moved to Nashville, where many assume he met Fleck, who also lives there.

“I actually met Béla at a Flecktones gig in Aspen, Colo., of all places,” Coffin says. “I’d been running a jam session in Nashville, and a drummer who knew Béla came through. He called him and said, ‘There’s this horn player in town that you don’t know about.’ I was playing in Colorado, too, so we talked, and did a bit of playing once we both got home. He asked me to sit in at a club in Nashville, and it just kind of went from there. Things clicked, and I do a lot of composing, which appealed to the group.”

The Flecktones have all taken time off to work on other projects in recent years. They opened two shows during Return to Forever’s 2008 reunion tour this summer, but will take most of 2009 off after upcoming concerts to support their forthcoming holiday CD.

“It’s called Jingle All the Way,” Coffin says. “It’s not Nat ‘King’ Cole’s holiday record, even though that’s one of my favorites! We have some throat singers, some Jewish tunes, a track with five Christmas carols going at the same time, and ‘The 12 Days of Christmas’ in 12 different keys and time signatures. I just got an e-mail from Vic saying, ‘I think this is one of our best records ever.'”

Coffin has an additional new, largely improvised CD with keyboardist Charlie Peacock, Arc of the Circle (Runway), in addition to his ongoing work as an in-demand clinician and educator.

“I do a lot of clinics as a Yamaha- and Vandoren-sponsored artist,” he says. “I also do some private teaching, and I’m an adjunct professor at Cumberland University, just outside of Nashville. I feel like I can reach young players pretty quickly and develop a rapport, mainly by having fun with them.”