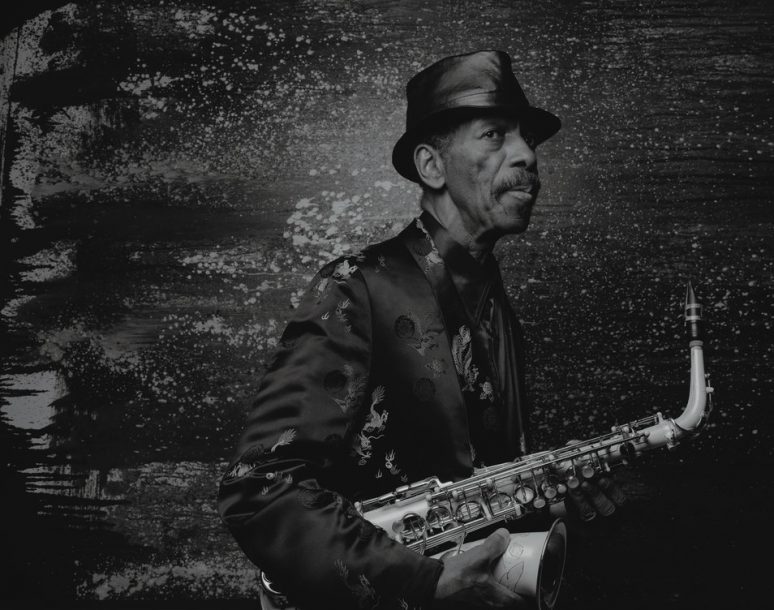 Ornette Coleman’s remarkable career has operated at two levels: fighting the battle every lonely visionary must fight and fighting against the frustration that flows from this. It has meant the alto saxophonist, who once threatened to pull the jazz temple down by abandoning prearranged harmony and to some extent the constraints of bar lines as well, has been an intermittent presence in jazz for some 40 years. Indeed, tonight’s concert at the Barbican was his first in London for five years although, as if to make up for his absence, he performed again three days later with the BBC Symphony Orchestra conducted by Howard Shore to create a live soundtrack for the Davis Cronenberg film “Naked Lunch”.

Coleman’s Barbican concert, with his trio and an ensemble he calls Global Expressions, revealed his highly personal tone from his trademark white-plastic alto saxophone had changed little since from his 1959 recordings, the year of his New York debut that caused a sensation. In ushering in free jazz, Coleman became the enfant terrible of jazz-Leonard Bernstein and Dorothy Kilgallen said yes; Kenneth Tynan said no. But after the intoxication came the hangover. Suspicious of being ripped off by his management, Coleman had virtually withdrawn from public performance by 1962, the first of many furloughs dotted throughout his career. Free jazz, deprived of its most charismatic figurehead, described a graceful ellipse and subsided in never-never land-never totally arriving yet never actually going away.

Coleman, always the most radical of even his finest followers, created a fault line through jazz which has remained to this day. Yet 40 years on he appears less a revolutionary, more a Rousseau-like figure who through a mixture of naiveté and skill liberates his music from traditional constraints. In bypassing the carefully acquired urban sophistication of jazz with a rural honesty, Coleman reminds us of jazz’s vernacular origins in the blues, a key factor in bridging free jazz with other styles.

A compelling melodicist who also draws from Charlie Parker, as his opening number revealed, Coleman’s off-pitch notes, bent and vocalized tones are well established expressive devices within the jazz tradition, yet sound radical in his hands. It is, of course, the way he pulls these elements together into a wholly original style that is provocative, dangerous even, but always somehow apt that fascinates. Yet Coleman’s music is not merely a soloist’s art; he has always seen his compositions in terms of a group endeavor, and with his regular accompanists Charnett Moffett on bass and his son Denardo on drums, the vibrant interplay of collective improvisation framed the leader’s asymmetrical phrases whose logic derives the melodies themselves rather than its underlying harmonies-it is the song itself rather than the song form that interests him.

Moffett played a highly interactive, coloristic role within the ensemble, with bowed counter melodies, startling cross rhythms and a variety of tonal effects that frequently altered the density of the small ensemble. Often he and Denardo played at twice the tempo of Coleman’s unfettered streams of consciousness creating cascading, shimmering discourses of free-flowing complexity. It could well be Coleman’s finest group since Don Cherry, Charlie Haden and Billy Higgins.

His Global Expressions band emerged by augmenting his trio with tabla player Badal Roy, erhu player Guowei Wang and the slightly surreal and other worldly voices of Probaker Karaker, an Indian Classical singer and Sussan Deyhim, a Sufi singer. Yet whatever the comings and goings within his ensemble, the epigrammatic eloquence of Coleman’s alto, a mixture of aphorism and legato declamation, provided the unifying element-whether in obbligato to the singers or soaring above the chattering percussionists.

Shopenhauer once called style the “physiognomy of soul” and Coleman bares his soul every time he plays. Exposed are the roots of the blues, those nontempered notes so timeless but evocative. It’s a lonely cry, plaintive and even now misunderstood.